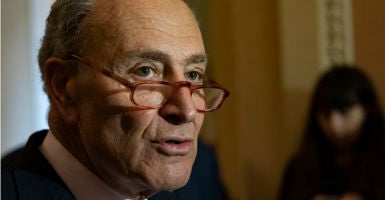 If you don’t believe our government is complex and inefficient, just ask presidential appointees navigating the Senate confirmation process.

Under our constitutional framework, the president hires the people he wants to run the executive branch, many of whom require Senate confirmation. This includes about 1,200 of the most senior employees, such as ambassadors or Cabinet members.

Unfortunately for the Department of Defense and other organizations dedicated to national security, the Senate confirmation process has become obstructive and hyper-partisan. This not only deprives the president of the ability to run the executive branch, it has grave consequences in the areas of homeland security and national defense in particular.

For example, within the Department of Homeland Security, which plays a key role in protecting the homeland from various threats, only 47% of key positions are occupied.

The director of Immigration and Customs Enforcement, one of several important vacant positions at the department, is responsible for nearly 20,000 employees who enforce laws and guard the border.

Mark Morgan was nominated in May to run ICE, but his name has not yet even been referred to the Homeland Security and Governmental Affairs Committee.

At the Department of Defense, Dana Deasy has served since April 2018 as the chief information officer, where he leads the department in managing information and cybersecurity in an era of increasing cyber threats.

His appointment was announced in June, and he received a hearing on Oct. 29. But it remains unclear when he finally will be confirmed by the Senate.

At the Office of the Director of National Intelligence, which leads intelligence integration, the Senate has yet to confirm a director for the National Counterintelligence Security Center, which fuses intelligence and shares information with partners.

The current director, William Evanina, has filled the position since June 2014, and was formally nominated in February 2018. Yet, five years and a change in administration since he assumed the role, he has yet to be confirmed by the Senate.

Common sense would dictate that candidates should have nothing to fear, as long as they were otherwise qualified and had no skeletons in their proverbial closet, but exceptional presidential appointees must run the gauntlet of bureaucracy regardless.

The disincentives range from a generally inconvenient process to outright intrusions on an individual’s privacy. Although it is important that we ensure political appointees are capable of fulfilling their duties, too much procedure is counterproductive.

Today, President Donald Trump’s nominees face a wall of resistance in the Senate, as Senate Democrats have abused the rules and procedures to slow down, and in many cases, kill off well-qualified nominees.

First, the days of giving unanimous consent are over for Trump nominees. In the past, that happened all the time as the Senate sought to boost productivity by limiting procedure.

Second, it is common for many, if not most, nominees to find that there is a hold on their nomination. Under Senate rules, individual senators can place a hold on any nominee they object to.

Trump’s nominations have taken longer than past presidents. According to The Washington Post, on average they spend “69 days in committee—longer than the 58 days for Obama’s nominations.”

To reach the confirmation vote, Trump’s nominees also had to wait 77 days on average compared to only 30 for President Barack Obama.

In the meantime, nominees are required to fill out the OGE Form 278 Executive Personnel Financial Disclosure Report as well as the dreaded SF86 for positions requiring a security clearance. The OGE Form 278 requests the nominee to provide detailed financial information, and the SF86 covers everything from decades of employment history to foreign travel.

According to the Congressional Research Service, the documents are reviewed by the Office of Government Ethics, but “committees review financial disclosure reports and some make them available in committee offices to members, staff, and the public.”

Therefore, if lawmakers wish to damage a nominee or the nominator, they can simply release the information to other hostile lawmakers and media.

These complexities often force the nominees to pursue legal counsel to help navigate the complex forms and processes. After many months of waiting and filling out form after form, the costs quickly add up.

The government has many plausible options to repair the broken process. The Senate could revise the list of Senate-confirmed positions again to reduce the total number of positions that require confirmation.

Nominees also would benefit from having more standardized paperwork that can be used by all involved organizations, instead of completing different forms for Senate committees, the Office of Personnel Management, or other government agencies involved in the process.

The Trump White House would be wise to beef up the Office of Presidential Personnel by appointing senior, experienced leaders to the office, and providing nominees consistent, constant information along the way. This has been severely lacking in the last two and a half years.

Nominees who are willing to leave their jobs and serve the public deserve to be treated with respect during the confirmation process, and most assuredly deserve an up-or-down vote in a timely fashion. The grandstanding and political maneuvering serves no one.