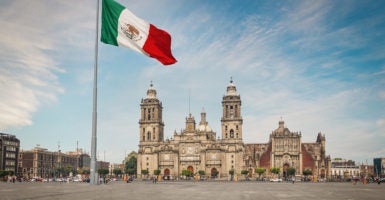 Mexico's new tax law allows the government to suspend presumption of innocence and seize assets before any due process. (Photo: diegograndi/Getty Images)

Devin DeCandia is a member of the Young Leaders Program at The Heritage Foundation.

A new tax law approved last month by the political party of Mexican President Andres Manuel Lopez Obrador—which holds absolute control of the Mexican Congress—gives the government the right to seize land and assets without legal due process in certain tax evasion cases.

These new fiscal enforcement measures could damage Mexico’s economic freedom as well as its economic growth and its trade relations with the U.S.

Under U.S. federal statutes, tax evasion is a Class E felony, the lowest category of felonies—just above a Class A misdemeanor. By contrast, murder is a Class A felony in the United States, the highest category. Furthermore, prosecution of all federal crimes must be according to due process.

Opponents of the new Mexican law, however, assert that tax evasion has now been categorized as the equivalent of much higher felony classes, along with such grave infractions as organized crime, narcotics trafficking, corruption, and even homicide.

In answer to a reporter’s question about those concerns at one of his daily morning press conferences, Lopez Obrador defended the new law by saying: “Nothing to hide, nothing to fear.”

Certainly, Lopez Obrador is right to fight against Mexico’s deeply rooted corruption, and tax evasion in the country is a well-known and long-standing problem.

But Mexican business leaders are deeply concerned by the authority the new law gives the government to suspend the presumption of innocence and seize assets prior to any legal due process.

Although supporters of the new law say it will be used only “to prosecute shell companies that mint fake receipts used by taxpayers to lower obligations,” opponents argue that the government could target for prosecution any individuals or companies that are out of favor politically for even a simple accounting error. That could spell prison time and economic ruin.

“With these new criteria, it would be jail and asset confiscation even before conviction … . This government thinks all business people are gangsters. That’s how they treat us,” said Armando Santacruz, chief executive of Grupo Pochteca, a Mexican chemical distribution company.

Reginaldo Esquer, head of the tax committee at Coparmex, an association that represents the interests of thousands of private Mexican companies, went even further, stating at a news conference that it was “the start of a new era of fiscal terrorism.”

The new law allows the government complete discretion as to which individuals or companies it selects for prosecution.

Even the Mexican government’s Human Rights Commission has criticized the new law, saying that it does not provide sufficient protections for property rights and due process.

In the eyes of critics who fear that Lopez Obrador is transforming Mexico from a democracy to an authoritarian state, the statute is another troubling signal that he is tightening the grip of the federal government over the economy and is consolidating power at the top.

Depending on how the new tax law is implemented, it may push Mexico even further down in future rankings.

Weakening one of the main pillars of economic freedom—the rule of law—will certainly stifle the Mexican economy.

The policy uncertainty introduced by the new law will have other, perhaps unintended, negative consequence for Mexico’s other economic freedom indicators, among them business freedom and trade freedom.

The once-strong Mexican economy has been stagnating, registering a minimal rate of growth in 2019. As of the third quarter of 2019, gross domestic product growth is forecast to be its lowest since the 2009 recession.

Lopez Obrador’s policies have led to a decline in both public and private investment.

The health of the Mexican economy certainly affects the U.S. economy.  Bilateral U.S.-Mexico trade totaled $671 billion in 2018, with Mexico ranking as the second-largest importer of American goods.

A deteriorating business environment in Mexico, coupled with a weakened rule of law, could chill bilateral investment and potentially increase cross-border trade transaction costs due to the new risks faced by Mexican businesses.