7 Things to Know About Rep. Jim Jordan as He Leads GOP’s Defense of Trump 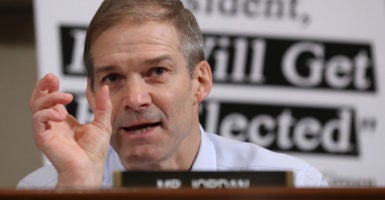 As impeachment hearings took the spotlight on Capitol Hill, Rep. Jim Jordan, one of President Donald Trump’s fiercest defenders, is temporarily reassigned to the House committee driving the process, where the Ohio Republican already is questioning witnesses sharply and voicing his party’s frustration with the partisan process.

As recently as a week ago, Jordan was the top Republican on the House Oversight and Reform Committee, where he took part in closed-door depositions of witnesses before this week’s public hearings.

The change that placed Jordan on the House Permanent Select Committee on Intelligence signals congressional Republicans’ faith in him as a capable communicator tasked with combating the attack strategy of Democratic lawmakers.

Here are seven things to know about the fiery Ohio lawmaker as he takes a leading role in the Republicans’ defense strategy for Trump in the impeachment inquiry.

1. He was founding chairman of the House Freedom Caucus.

As a staunch conservative who often butted heads with Republican Party leadership in Congress, Jordan helped to found the House Freedom Caucus in 2015.

Jordan, together with several other prominent congressional conservatives sympathetic to the tea party movement, started the caucus to consolidate support for strongly conservative policies and pressure then-House Speaker John Boehner, a fellow Ohio Republican, to take up more conservative legislation.

The Freedom Caucus was instrumental in Boehner’s resignation as House speaker when several members withdrew their support, and Boehner found it increasingly difficult to unify the right wing of the party with more moderate lawmakers.

Jordan served as the first chairman of the caucus from 2015 to 2017, and the group now has more than 30 members, all Republicans, in the House.

2. Boehner called him a “legislative terrorist.”

In an interview with Politico in 2017, Boehner recalled Jordan’s role in resisting his more moderate agenda.

“Jordan was a terrorist as a legislator going back to his days in the Ohio House and Senate,” Boehner said. “A terrorist. A legislative terrorist.”

3. He was a collegiate championship wrestler.

Jordan competed as a wrestler while attending the University of Wisconsin at Madison, winning two NCAA Division I championships in 1985 and 1986.

Even though he’s left his athletic career behind, Jordan still has a reputation as a fierce combatant, only this time it’s in the House instead of the gym.

4. He faced criticism surrounding his time as a wrestling coach.

Jordan was an assistant wrestling coach at Ohio State University from 1987 to 1995.

After numerous male athletes accused a team physician, Dr. Richard Strauss, of sexual abuse, Jordan came under fire for doing nothing to protect students at the time. He has said he was unaware of the abuse.

“The idea I’m not going to defend our athletes when I think they’re being harmed is ridiculous,” Jordan said on Monday, when asked about a college wrestling referee who claimed he told Jordan about allegations against Strauss, according to LimaOhio.com.

“This is just, this is someone making a false statement,” he added.

Democrats will likely continue to accuse Jordan of wrongdoing, especially as he takes a more visible role in the impeachment proceedings.

5. He argued for opening a special counsel probe (just not the Russia one).

In 2014, Jordan introduced a resolution calling on then-Attorney General Eric Holder to open a special counsel investigation into revelations that the IRS targeted the tax-exempt status of a number of conservative nonprofits.

Holder ordered an FBI investigation into the issue, and what was then called the House Oversight and Government Reform Committee, on which  Jordan served, found that conservative groups were targeted more often than liberal ones.

But with the appointment of a special counsel into Russian interference in the 2016 election, Jordan gained a new reputation as a fierce opponent of the investigation. He worked to undermine special counsel Robert Mueller and Deputy Attorney General Rod Rosenstein by questioning their impartiality, defining himself as a staunch defender of Trump in the process.

6. He ran for House speaker after Paul Ryan’s resignation.

Jordan took advantage of his position as one of the president’s closest allies to run for House speaker in 2018, when Speaker Paul Ryan, R-Wis., who had succeeded Boehner, retired.

Jordan’s attempted push into party leadership in the House, however, secured his name among the upper echelons of Trump-era Republican power brokers.

McCarthy is now House minority leader, and put Jordan on the Intelligence Committee for the impeachment inquiry.

7. He has a 100% rating from the American Conservative Union.

Jordan is one of only three current lawmakers with a perfect lifetime score from the American Conservative Union, an organization that ranks members of Congress based on their voting records on conservative issues.

It should come as little surprise that Jordan has a perfect 100 rating. As a leading conservative in the House, he’s driven the conversation about conservative policies for years.

Now that he’s front and center for the impeachment hearings, Jordan is getting the chance to bring his fiery brand of conservatism to bear on witnesses in the inquiry.