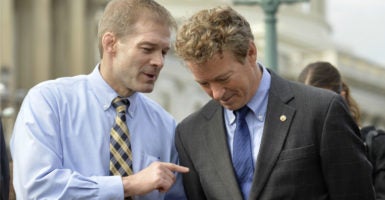 Paul stressed that the language is the same as the repeal legislation that Republicans in the House and Senate passed and sent to President Barack Obama, which he vetoed in January 2016.

“The Republican Party is unified on Obamacare repeal,” Paul said in a prepared statement Thursday, adding:

We can honor our promise right away by passing the same language we acted on in the last Congress. Then, we can have a separate vote on replacement legislation that will deliver lower costs, better care, and greater access to the American people.

Since Monday evening, when House Speaker Paul Ryan released the text of the American Health Care Act,  conservatives in the House and Senate have voiced their concerns about the 123-page Obamacare replacement bill.

The House leadership Obamacare Lite plan has many problems. We should be stopping mandates, taxes and entitlements not keeping them.

The House Freedom Caucus, with roughly 40 conservative members, has thrown its support behind Paul’s bill.

Rep. Jim Jordan, R-Ohio, a former chairman of the caucus, introduced companion legislation in the House on Wednesday.

Other Senate conservatives, including Mike Lee, R-Utah, and Ted Cruz, R-Texas, also have said they won’t support anything less than the 2015 repeal bill.

Paul’s Obamacare Repeal Act (S. 554) would repeal key provisions of Obamacare, including mandates requiring individuals to buy health insurance and employers of a certain size to provide it for employees.

Paul said his bill, co-sponsored by Lee, would repeal Obamacare taxes such as premium tax credits and cost-sharing subsidies, the medical device tax, and the so-called Cadillac tax on generous health plans. It also would reinstate deductions for medical expenses.

The revived 2015 bill also would repeal the Prevention and Public Health Fund, often referred to as the “Obamacare slush fund,” the Kentucky Republican said, and eliminate expanded eligibility for Medicaid.

Finally, the bill would prevent the secretary of the Department of Health and Human Services, now former Rep. Tom Price of Georgia, from making payments under Obamacare’s reinsurance program, which provided the opportunity for insurance companies to  get taxpayer bailouts.

In January, Paul introduced the Obamacare Replacement Act (S. 222) to allow Americans to choose more affordable, government-free insurance. It also would allow Americans to save an unlimited amount in health savings accounts and to buy insurance across state lines.