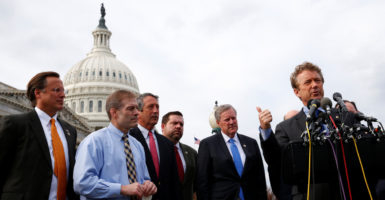 Sen. Rand Paul, R-Ky., and conservative lawmakers are asking Republican leaders for a "seat at the table" to negotiate changes to the House GOP's Obamacare replacement plan or risk losing their support. (Photo: Eric Thayer/Reuters/Newscom)

Conservatives in the House and Senate are forging their own path ahead on Obamacare’s repeal and replacement, with plans to introduce legislation unwinding the health care law that Congress passed in 2015.

Under their plan, Obamacare would be dismantled in one bill and replacement provisions would be passed in another.

.@RandPaul: “This doesn’t divide Republicans. This brings us together – and that is complete repeal.” pic.twitter.com/GggIwfTKkE

The legislation, called the American Health Care Act, eliminates the penalty for not complying with the individual and employer mandates, and repeals the Medicaid expansion, effective by 2020, and subsidies.

It also includes aspects of a replacement plan, including the expansion of health savings accounts and a new system of advanceable, refundable tax credits.

The White House acknowledged that it expects Republicans in the House to negotiate before voting on the replacement plan and called the bill a “work in progress.”

But in a meeting with congressional Republicans on Tuesday afternoon, Vice President Mike Pence warned lawmakers that “this is the bill” that has President Donald Trump’s backing.

Despite the anticipation building around the replacement proposal, it didn’t take long for conservative lawmakers and outside groups to begin voicing their opposition to the legislation once it was released.

They criticized it for a number of reasons: The bill leaves Medicaid expansion in place until 2020 and creates what they said is a new entitlement program in the form of the advanceable, refundable tax credits based on age.

Conservatives also derided the legislation as a form of “Obamacare-lite,” one that didn’t fully repeal the health care law, which Republicans promised voters they would do in the last four elections.

“The first thing Republicans are bringing forward is a piece of legislation that we’re going to put on a Republican president’s desk that says repeal it, but keeps Medicaid expansion and actually expands it, that keeps some of the tax increases,” Jordan told reporters. “That is not what we promised the American people we were going to do.”

For the roughly 40 members of the House Freedom Caucus and a handful of Senate conservatives, the pathway to repeal and replace is simple.

They have asked GOP leaders to take up legislation that already passed both chambers in 2015, but was vetoed by President Barack Obama.

The bill repealed Obamacare’s individual and employer mandates, Medicaid expansion, subsidies, and taxes. It also stripped Planned Parenthood of its federal funding for one year.

Now, Jordan and Paul are taking Obamacare’s repeal into their own hands, in search of a “clean repeal.”

“Our goal is real simple: Bring down the cost of insurance for working families and middle-class families across the country,” Jordan said. “In an effort to do that we think you have to get rid of Obamacare completely.”

During a press conference Tuesday, Paul and Jordan, who were joined by other Freedom Caucus members and Sen. Mike Lee, R-Utah, stressed that Republicans needed to tackle repeal first before turning their attention to replacing the health care law.

“We are united on repeal, but divided on replacement,” Paul said.

With roughly 40 members, the House Freedom Caucus has emerged as an influential bloc in the House, where the bill repealing and replacing Obamacare would need 218 votes to pass.

Additionally, Paul, Lee, and fellow conservative Sen. Ted Cruz, R-Texas, drew a hard line in the upper chamber on Obamacare’s repeal, refusing to accept anything less than the 2015 bill.

Freedom Caucus Chairman Mark Meadows, R-N.C., said he didn’t believe his group would take an official stance on the replacement plan—a move that requires 80 percent of the conservative caucus’ approval—but stressed that the group has serious concerns and would have a “robust debate” on the proposal.

Paul, meanwhile, said Freedom Caucus members and Senate conservatives had been contacted by the White House and Department of Health and Human Services Secretary Tom Price, a move he said demonstrates the power both factions have in their respective chambers.

“The House Freedom Caucus’ power and the power of several conservatives in the Senate is to withhold our support and make [the bill] better,” he said. “If they have 218 votes, we won’t get any change. That will be the bill. If they don’t have 218 votes, there will be a negotiation, and conservatives will get a seat at the table.”

“The House Freedom Caucus has enormous power if they stay together, so do the conservatives in the Senate,” Paul continued. “It’s unknown what the product will be, but I promise you the White House, the Cabinet, and everybody assumes there’s going to be a negotiation. Conservatives want a seat at the table, and we want to repeal Obamacare.”

Conservatives view the replacement plan as the “opening bid,” but they’re wary of supporting any legislation repealing or replacing the health care law that would cause them to compromise on their principles.

“Do we need to lower the bar in what we believe as conservatives simply because a Republican is now in the White House?” Rep. Mark Sanford, R-S.C., said.