5 Things to Watch in Tracking the Future of ISIS 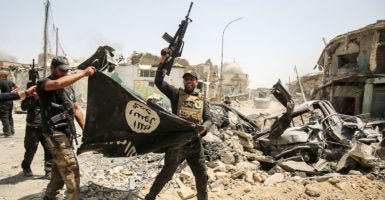 Its caliphate relinquished, the Islamic State's operations inevitably will be disrupted by the death of its emir. Pictured: Members of an Iraqi counterterrorism force cheer July 2, 2017, as they carry, upside down, the ISIS flag in Mosul during the offensive to retake that city from the terrorists. (Photo: Hmad al-Rubaye/AFP/Getty Images)

Almost as soon as it became clear that ISIS leader Abu Bakr al-Baghdadi was dead, the revisionism began about whether this was actually a good thing.

Some analysts predicted that al-Baghdadi’s death as a “martyr” would inspire others, becoming a “propaganda bonanza” for the Islamic State, also known as ISIS.

We should not be so gloomy. The death of such a sadistic killer and serial rapist is unambiguously good news.

It was also the last thing that ISIS needed. Caliphate relinquished, the group’s operations inevitably will be disrupted by the death of its emir, especially with Abu Hassan al-Muhajir—a potential successor—killed in a U.S. airstrike just hours later.

Still, the demise of the Islamic State’s “caliph” does not mean the fight against Islamist terrorism is over; far from it. As the dust settles on the al-Baghdadi raid, here are five things to look out for in the days and weeks ahead.

Firstly, to what extent was the intelligence gleaned from the al-Baghdadi compound sufficient to roll up other ISIS networks? President Donald Trump stated that “we took highly sensitive material and information from the raid, much having to do with ISIS’ origins, future plans” during the raid.

It is unclear whether Abu Hassan’s death was linked to the al-Baghdadi intelligence haul, but we should look for signs of the U.S. and its allies across the world hitting ISIS hard in the weeks to come.

Secondly, and conversely, we should be cognizant of the possibility of reprisal attacks in the West but not necessarily expect them. Already we have heard pundits speculate about “more attacks within coming days and weeks, as a retaliation for this very high-profile killing.”

It can happen: Omar Mateen, the ISIS-inspired shooter who killed 49 and wounded 53 at Pulse nightclub in Orlando, Florida, in June 2016, told police negotiators that his attack was “triggered” by a U.S. airstrike that killed Abu Wahib, a senior ISIS figure, just weeks earlier.

This may or may not be true, but as a general rule of thumb, when terrorists say they are doing something for a specific reason, it is often worth treating it seriously.

Those fears turned out to be unfounded, and reprisals for al-Baghdadi’s death are unlikely as well. Believing that ISIS will look to majorly step up its attack planning now implicitly suggests that it has been pulling its punches so far. That’s a rather dubious suggestion. If ISIS can strike in the West, it will, regardless of the strength of al-Baghdadi’s pulse.

Thirdly, how does al-Baghdadi’s death affect the future of ISIS strategically? As Hassan Hassan pointed out in The New York Times, ISIS is currently “caught somewhere between being a proto-state and a full-fledged insurgency” in Syria and Iraq. Reconstituting the caliphate in Iraq and Syria is a nonstarter for ISIS in the short term, which means it will surely have to revert to its insurgent roots.

Hassan also suspects that the jihad will become increasingly localized following the fall of the caliphate, with less focus on Western attacks. This is certainly a possibility; attacks in the West are certainly down from their 2016-17 peak.

Yet vigilance is still required. A U.N. Security Council report from earlier this year noted “the revival of links between individuals in various European countries” and ISIS’ leadership. Internal ISIS files discovered in Syria by The (London) Sunday Times earlier this year also hinted at ISIS having more command and control capacity than sometimes assumed.

Fourth, can ISIS remain unified? That ISIS’ affiliates across the globe will remain loyal to al-Baghdadi’s eventual successor is not a given. As terrorism analyst Daveed Gartenstein-Ross pointed out to Voice of America, “The standard bayat [pledge of allegiance] is not to an organization … Bayat is on an individual to individual level.”

Al-Baghdadi’s death is not guaranteed to lead to division—after all, al-Qaeda global affiliates stayed the course despite bin Laden’s death—but it is possible.

Fifth, what does this mean for al-Qaeda and its leader, Ayman al-Zawahiri? There is certainly an opportunity for al-Qaeda to exploit the problems that ISIS is very clearly currently facing by recruiting disillusioned fighters and fundraising off the back of ISIS’ failure to sustain the caliphate (as al-Qaeda warned it would).

A possible ISIS and al-Qaeda merger remains speculated upon—speculation not quelled by the discovery that al-Baghdadi was being sheltered in Idlib by a commander in Hurras al-Din, the Syrian group operated by al-Qaeda loyalists—but remains a long shot.

However, al-Baghdadi’s death also shines the spotlight more brightly on al-Qaeda’s leader. The U.S. nearly snagged al-Zawahiri on at least one occasion: The CIA narrowed his location down to a specific village in North Waziristan in the 2012-13 period.

Now, with al-Baghdadi gone, al-Zawahiri reverts to being the most high-profile terrorist left and also perhaps the one with the most obvious name recognition in the U.S.

That should matter to us if for no other reason than that it matters to Trump.

The threat from ISIS and groups like it will remain pronounced. We have become used to that and to reports of the latest suicide bombing, mass shooting, or vehicular attack perpetrated by al-Baghdadi’s acolytes.

The past week has been a welcome change: one in which it has been almost exclusively bad news for ISIS. That cannot last. There will certainly be darker weeks ahead in this fight. But al-Baghdadi’s timely death at least presents an opportunity to make some headway in winning it.