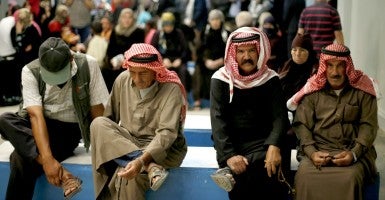 Syrian refugees wait to receive medical treatment Sept. 22 at a refugee camp in the Jordanian city of Mafraq, near the border with Syria. (Photo: Muhammad Hamed/Reuters/Newscom)

Following the horrific attacks in Paris last week, Americans are right to have real concerns about who might be next in the terrorists’ cross hairs.

One issue that has moved front and center is whether terrorists are able to enter the United States while posing as Syrian refugees. This has come after at least one of the Paris terrorists appears to have slipped into Europe while pretending to be a refugee applicant.

That is a serious issue that deserves a serious response from Washington.

For starters, we know the White House has not dealt with the issue in a responsible manner. Even though upward of 30 governors have announced they don’t want new Syrian refugees in their states, the president has dismissed such concerns as “un-American.”

They are anything but. Even Secretary of State John Kerry acknowledged that governors should “stand up and say I want to make certain I want to protect my people.”

The apprehension on the part of the governors reflects their lack of confidence that the Obama administration is delivering a credible plan to address public safety issues and the impact on the welfare of their citizens.

Rather than dismiss the governors, Obama ought to make a more responsible effort to address serious issues. Weeks before the Paris attacks, The Heritage Foundation wrote on the refugee crisis and the ways that we can improve the security of the refugee process. This research is now more valuable than ever.

Serious problems exist with screening individuals, but rather than shut down the refugee system because of the potential risk, these requirements should be followed to keep Americans safe:

These steps do not stem from irrational fears, but are legitimate concerns with vetting individuals from areas like Syria.

FBI Director James Comey has said as much:

… if someone has never made a ripple in the pond in Syria in a way that would get their identity or their interest reflected in our database, we can query our database until the cows come home, but there will be nothing show up because we have no record of them.

These individuals should be the focus of our refugee efforts. This effort also speaks to the importance of providing U.S. officials with adequate intelligence tools and resources.

Additionally and subject to intelligence assessments, the U.S. should be looking to accept individuals likely to be those in greatest need from refugee camps in Syria, Jordan, and Lebanon, rather than those already in Europe.

The goal should not be to shut down legitimate humanitarian operations, but to ensure they are done in a responsible manner. This does not mean that security concerns are abandoned—far from it.

We should seek to further all U.S. national interests by keeping the homeland secure and helping those who are persecuted.

Conversely, what we should not do is believe that simply taking refugees is a solution to the problem.

Refugee programs are an emergency measure to protect those “persecuted or have a credible fear of persecution based on their religion, race, political beliefs, or membership in a social group.”

They are not a substitute for a policy that deals with the source of instability. Part of the great dissatisfaction with the Obama administration is the general belief that it has no plan on how to deal with the root causes of the conflict.

What we need is for our national leaders to take a deep breath and start acting responsibly. It is important that the U.S. system remain different from the open door Europe is extending to the current surge of migrants and refugees.

Europe is letting people enter without vetting and then maybe vetting them later once they reach their final destination. Under American law, U.S. officials must vet first. That can’t change.

Further, the current crisis should not mean there are any shortcuts. The U.S. has taken refugees from conflict, including Iraq and Afghanistan, while active U.S. combat operations were ongoing.

The U.S. for the past several years has accepted around 70,000 refugees a year from around the world.

The refugee system takes about 12 to 18 months to complete as cases are passed from the U.N. and the State Department to Homeland Security to Health and Human Services and nonprofit resettlement agencies, and includes interviews and background checks.

Nothing during that process should be overlooked or passed over.

The U.S. can and should improve the refugee vetting process by undertaking the appropriate risk assessments and consulting with Congress on the strategies for managing those risks.

The administration ought be moving in partnership with Congress and governors about meeting both humanitarian and national security responsibilities.