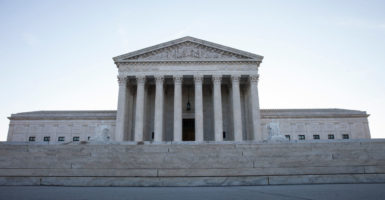 In November, the Supreme Court will hear cases dealing with traffic stops and the Fourth Amendment and with the Obama-era Deferred Action for Childhood Arrivals immigration program. (Photo: Zach Gibson/Getty Images)

The Supreme Court returns for oral arguments Monday in a term that already is shaping up to be an exciting one.

The justices already have heard arguments in cases involving the insanity defense; whether Title VII’s prohibition on “sex” discrimination covers sexual orientation and gender identity-based discrimination; and the constitutionality of former President Barack Obama’s appointments to Puerto Rico’s Financial Oversight and Management Board.

Looking forward to the court’s November sitting, we can expect arguments in important cases dealing with traffic stops and the Fourth Amendment and with the Obama-era Deferred Action for Childhood Arrivals immigration program.

Traffic Stops and the Fourth Amendment

On Nov. 4, the court will hear oral arguments in Kansas v. Glover.

The issue is whether it’s reasonable for a police officer to assume that the person driving a car is the registered owner and, when that person has a suspended license, make a traffic stop based on that assumption.

We don’t know why Mehrer decided to check this plate in the first place. (Perhaps he was having a slow day.) He then proceeded to conduct a traffic stop, which resulted in Glover being charged with driving as a habitual violator.

The state district court ruled in favor of Glover. The case eventually reached the Kansas Supreme Court, which held that the officer’s assumption alone did not establish reasonable suspicion of criminal activity in order to conduct a stop consistent with the Fourth Amendment.

Now at the U.S. Supreme Court, Kansas argues that the state court’s standard requires more than reasonable suspicion, and in any event, brief investigative stops impose a “minimal intrusion” on people.

An officer can determine quickly upon pulling a vehicle over whether the driver is the registered owner. Glover maintains that increases in technology, such as license plate readers that can scan hundreds of license plates on the road in minutes, could lead to subjecting more and more law-abiding drivers to the stigmatizing experience of being pulled over.

The Supreme Court will hear arguments in three consolidated cases (Department of Homeland Security v. Regents of the University of California, Trump v. NAACP, and McAleenan v. Vidal) related to the Deferred Action for Childhood Arrivals program on Nov. 12.

The DACA program was created during the Obama administration by the Department of Homeland Security, allowing illegal aliens who were 30 years old or younger and came to the United States as children to apply for work authorization and deferral of deportation.

Then the Obama administration expanded the program by removing the age limit and created a related program, Deferred Action for Parents of Americans, for the parents of U.S. citizens who came to the country illegally.

The U.S. Court of Appeals for the 5th Circuit sided with the states. The case reached the Supreme Court in 2016, but Justice Antonin Scalia died while the case was pending. The eight-member court deadlocked, leaving the lower court ruling in place.

Fast-forward to the Trump administration, and the Department of Homeland Security concluded that DACA itself was unlawful and decided to roll back the program, while continuing to process renewals for current DACA recipients for six more months.

Not surprisingly, that decision drew several legal challenges. District courts in New York; Washington, D.C.; and California ordered the Trump administration to stop implementing its rollback of the DACA program.

Now at the Supreme Court, the Trump administration argues that its decision to reverse a program that it considers unlawful is rational, and that, in any event, since the Administrative Procedure Act prohibits judicial review of agency enforcement decisions, courts may not review its decision.

DACA recipients and several states that challenged the action contend that it’s not the type of enforcement decision contemplated by the Administrative Procedure Act’s bar on reviewability. They also maintain that the decision was based upon racial animus and deprived recipients of due process.

These are just two of the important cases the Supreme Court will hear in November. Later in the term, the justices will consider cases involving gun rights, abortion, school choice, and more, making this a blockbuster term.

The court should issue decisions in all of these cases by the end of June.