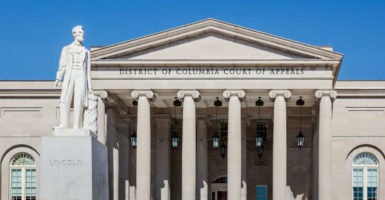 The Fourth Amendment is still alive and well, thanks in part to a recent ruling from the D.C. Circuit Court of Appeals.

In a Nov. 8 opinion, the court overruled a lower court decision and held that an Iraq War veteran, 1st Sgt. Matthew Corrigan, may pursue his claim for monetary damages against the District of Columbia and certain individual police officers after those officers violated his Fourth Amendment rights by ransacking his house—twice.

Corrigan is a U.S. Army reservist who suffers from post-traumatic stress disorder after having trained soldiers in Fallujah from 2005-2006. Following his tour in Iraq, Corrigan returned home to his apartment in a quiet corner of Washington, D.C.

In February 2010, Corrigan intended to place a call from his home to a counseling hotline for veterans, but inadvertently called the national suicide hotline instead.

When Corrigan informed the hotline volunteer that he was a veteran diagnosed with PTSD, the volunteer asked if he owned a gun. Unsurprisingly, the seasoned war veteran confirmed that he owned several.

The volunteer responded by asking Corrigan to “put [the guns] down,” which were not out in the first place. Corrigan explained that his guns were safely stored, but the volunteer was undeterred.

The volunteer next asked Corrigan if he intended to hurt himself or anyone else. Corrigan responded, “No.” After it became apparent that he was not receiving the type of counseling he sought when he made the call, Corrigan hung up and proceeded to go to sleep.

Meanwhile, the hotline volunteer notified the Metropolitan Police Department, who were then dispatched to Corrigan’s residence for “attempted suicide” at 11:13 p.m.

By 4 a.m., the police had set up a barricade on the block, shut off the gas to his house, evacuated his neighbors, surrounded his home with armed officers, and demanded that he come out. Corrigan complied, but was sure to lock his door on the way out, so his dog could not get out and nobody could invade his home.

Corrigan attempted to convince the officers during questioning that he was not attempting suicide, but the officers ignored him and told him they wanted to search his house. Corrigan refused to give consent to a search.

The following quote from the D.C. Circuit’s opinion sets the tone for the unconstitutional escapades that followed.

The officer who had asked for his key told him: ‘I don’t have time to play this constitutional bull[****]. We’re going to break down your door. You’re going to have to pay for a new door.’ Corrigan responded, ‘It looks like I’m paying for a new door, then. I’m not giving you consent to go into my place.’ [citations omitted] [emphasis added].

The police soon broke into Corrigan’s home and performed a search. The police found no one inside and no dangerous or illegal items in plain view—only Matrix, Corrigan’s dog that had been rescued from dogfighting. There was no evidence of any threat to human life.

That night, Corrigan checked himself into a veterans hospital for PTSD symptoms brought about from what had occurred.

Five hours later, the police broke into Corrigan’s home a second time. This time, they ransacked the place by opening and dumping the contents of every bag, drawer, box, and shelf onto the floor before finally satisfying themselves that no hazardous materials remained on the scene.

The police did not seek to obtain a warrant either time before breaking in without permission. The Fourth Amendment protects “against unreasonable searches and seizures” and has been interpreted by the Supreme Court in Payton v. New York (1980) to make any warrantless search inside a home presumptively unreasonable.

However, the Supreme Court also reaffirmed in Kentucky v. King (2011) that the presumptive warrant requirement can be overcome when exigent or emergency circumstances “make the needs of law enforcement so compelling that [a] warrantless search is objectively reasonable.”

A threat of immediate harm to self or others would certainly qualify as an exigency requiring immediate police intervention, but that was not what happened here.

Corrigan did not take the intrusion into his civil liberties lightly and, in February 2012, filed suit against the District of Columbia and individual police officers who broke into his home.

Corrigan sued under federal civil rights law (42 U.S.C. § 1983) allowing individuals to recover damages from police when officers violate a “clearly established” constitutional right at the time of the incident.

A right is considered clearly established if a reasonable officer understands that his actions violate someone’s constitutional rights.

As the Supreme Court reasoned in Welsh v. Wisconsin (1984), “physical entry of the home is the chief evil against which the wording of the Fourth Amendment is directed.”

In Corrigan’s case, the trial judge had dismissed the case, holding that a reasonable officer could have concluded that the home break-ins were justified due to exigent circumstances posed by the mistaken suicide threat.

However, in an opinion by Judge Judith Rogers, writing for the 2-to-1 majority, the D.C. Circuit reversed the lower court and held that even if the initial search was reasonable to verify whether Corrigan or anyone else was in danger, the second break-in was conclusively unconstitutional.

The police officers on scene would, of course, have been heroes if the initial search resulted in an endangered child being rescued or some other dire threat was averted.

This decision clears the way for Corrigan to seek redress for the intrusive actions that occurred six long years ago. It also sends a clear reminder to police, the Fourth Amendment is no bull.