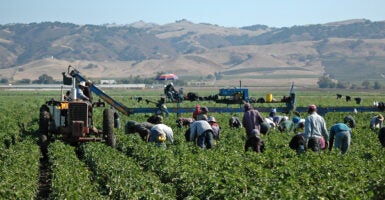 Farmworkers harvest yellow bell peppers near Gilroy, California. Crews like this may include illegal immigrant workers as well as members of the United Farm Workers Union. The Supreme Court on Wednesday overturned a California law that granted union organizers access to farmlands without the owners' permission. (Photo: NNehring/ E+/Getty Images)

The Supreme Court on Wednesday held that a state law permitting labor union organizers to enter farmland without permission to try to organize workers was unconstitutional under the Fifth and 14th Amendments to the Constitution.

In Cedar Point Nursery v. Hassid, the court considered a California regulation that allowed union agents to “take access” to farmland for up to three hours a day, 120 days per year in order to try to unionize workers.

Ordinarily, that sort of uninvited entry would be considered a trespass, but California’s regulation purported to make it lawful.

The question the court considered was whether that regulation was a “taking” within the meaning of the Fifth and 14th Amendments. Those provisions say that no state may take private property for public use without compensation.

The clearest example of a “taking” happens when the government uses its eminent domain power to acquire title to land against the owner’s wishes. But other takings occur when the government denies an owner the full rights that come with land ownership, such as the right to exclude other people.

The latter is what happened here. California’s government denied farmers the right to exclude people from their land. The right to exclude, wrote Chief Justice John Roberts for the majority, “is one of the most treasured rights of property ownership” and “is universally held to be a fundamental element of the property right.”

California argued that it had not taken the farmers’ land because the regulation allowed activists only temporary access. In dissent, Justice Stephen Breyer also took the position that anything less than 365-day-per-year access was not a taking.

Roberts called that argument “insupportable as a matter of precedent and common sense.”

For one thing, Roberts said, the court has long held that even temporary or intermittent invasions are still takings. And for another thing, he said, drawing an artificial line between temporary and permanent takings would create absurd results. For example, a taking would be unconstitutional if it extends for 365 days per year, but constitutional if it lasts 364.

In dissent, Breyer—joined by Justices Sonia Sotomayor and Elena Kagan—argued that California’s regulation did not deny owners the right to exclude, because it merely “regulates” that right. In their view, a law is only a taking if it “goes too far,” and to determine that, courts should “balance several factors,” keeping in mind that some “invasions” are needed for the government to run our complex modern world.

There’s something Orwellian about that, and Roberts deftly exposed it, saying that fundamental property rights, like the right to exclude, “cannot be balanced away.” Moreover, the fact that we live in a complex modern society “only reinforce[s] the importance of safeguarding the basic property rights that preserve individual liberty, as the Founders explained.”

Among others, Roberts was referring to John Adams, who said, “Property must be secured, or liberty cannot exist.”

Roberts was right to remind us of that lesson and to declare, once again, that protecting property rights “empowers persons to shape and plan their own destiny in the world, where governments are always eager to do so for them.”

It’s impossible to miss the message there to the increasingly loud socialist movement in the United States. The Constitution does not permit that vision. Private property is essential to liberty, and it’s not going anywhere.