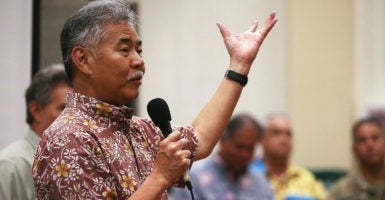 Hawaii's Gov. David Ige vetoed a bill that would have made Hawaii the 34th state to limit civil forfeiture. (Photo: Mario Tama/Getty Images)

One of the most positive trends in American law is the nationwide effort to reform civil forfeiture laws. Since 2014, 33 states have taken steps to secure the property rights of their citizens by limiting the practice.

Hawaii was poised to become the 34th state, but Gov. David Ige recently vetoed the bill. His veto ensures that innocent Hawaiians fighting forfeiture cases must continue to deal with a skewed, abuse-prone forfeiture system that even members of its own state Legislature likened to “government-sponsored theft.”

Civil forfeiture enables law enforcement agencies to seize currency and property alleged to have been used to commit a crime or that represents proceeds of a crime. Only, under both federal and Hawaii state law, there is no requirement that anyone be convicted, or even charged, before they can lose their cash, cars, or homes.

Hawaii law only requires that prosecutors prove that property is forfeitable by a preponderance of the evidence. Innocent owners bear the burden of effectively proving their own innocence to avoid losing their property.

Worse, current law incentivizes law enforcement to pursue forfeitures by awarding half the proceeds to the attorney general and the rest split evenly between police and prosecutors.

In other words, Hawaii’s forfeiture system suffers many of the same deficiencies as federal and many other state laws—shortcomings that have led to notable abuses and prompted broad, bipartisan calls for reforms.

Earlier this year, the Hawaii Legislature passed HB 748, which limited forfeitures to felony offenses, required a criminal conviction before property could be forfeited, and ended the financial incentive by directing that all revenues to the general fund be appropriated by lawmakers.

The bill passed the Legislature unanimously, which meant the veto could’ve been overridden. Unfortunately, the Legislature has adjourned for the year and will not hold a special session to override the veto. The bill will have to be reintroduced next year, and House Speaker Scott Saiki has indicated this likely will happen.

In defense of his veto, Ige claimed that “civil asset forfeiture is an effective and critical law enforcement tool that prevents the economic benefits of committing a crime from outweighing consequential criminal penalties and punishment” and that “safeguards presently exist in Hawaii’s asset forfeiture statutes that prevent the abuses cited in the bill.”

Both assertions are false.

The report also found seizures by the Drug Enforcement Administration often fail to spur or advance criminal investigations, or result in arrests and prosecutions, which “creates the appearance, and risks the reality, that [the agency] is more interested in seizing and forfeiting cash” than catching criminals.

An audit of Hawaii’s asset forfeiture program by the state’s Office of the Auditor found Hawaii suffers from the same problem. In 2015, for instance, more than a quarter of all asset seizures were not accompanied by any criminal charges against the owner of the property.

Second, the audit revealed that “even after nearly 30 years since the program’s inception, the department has not yet adopted administrative rules describing procedures and practice requirements for asset forfeiture.”

Without clear and established guidelines, law enforcement officers do not know when asset forfeiture is appropriate, which at least partially explains why, between 2013 and 2015, 14% of asset forfeiture cases were dismissed for reasons such as “lack of probable cause” to seize property, “failure to establish a nexus” between property and crime, or because owners received “insufficient notice” of proceedings against their property.

The lack of clear rules also hampers the efforts of owners to recover wrongfully seized assets.

Because the program only keeps track of assets that have already been sold at auction, in 2015, more than $1.5 million of seized assets were simply labeled as “pending sale,” not indicating whether they were to be sold in the future, kept for law enforcement use, or destroyed. Jarringly, the asset forfeiture program could not even fully account for all the property.

The asset forfeiture program also fails to “review or reconcile forfeiture case data,” which leads not only to a lack of understanding of how many active cases of asset forfeiture exist, but also to “numerous inaccuracies in the department’s data, including the data in annual reports to the legislature.”

Ige’s veto is a step in the wrong direction for Hawaiians’ property and due process rights. Fortunately, Hawaii’s lawmakers will have another bite at the apple next year and take advantage of the opportunity for Hawaii to join the 33 states that have already reformed their civil asset forfeiture and the 15 that now require criminal convictions.