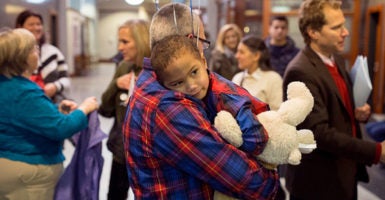 Under a new proposed rule from the Department of Health and Human Services announced Friday, the federal government no longer will withhold federal grant money from faith-based adoption providers that won’t compromise their views on same-sex marriage.

“I don’t want to discriminate against anyone. I want groups to be able to continue their work without being discriminated against,” White House adviser Kellyanne Conway told reporters during a Friday press gaggle. “ … I know that was in the works for a while.”

The proposed HHS rule clarifies that the federal government won’t discriminate against charitable organizations that don’t handle adoptions for same-sex couples when it comes to allocating federal grants. The proposed rule clarifies all federal nondiscrimination laws enacted by Congress will be enforced in awarding grants. Sexual orientation and gender identity are not currently covered under nondiscrimination laws enacted by Congress.

The proposal is a good step forward, said Ryan Anderson, a senior research fellow at The Heritage Foundation.

“The Trump administration is right to fix misguided Obama-era regulations that threatened both children’s welfare and religious freedom,” Anderson told The Daily Signal. “No adoption agency or foster care service should be penalized simply because they believe children deserve both a mom and a dad.”

LGBT activists criticized Friday’s move as discriminatory and said it would adversely affect a marginalized population.

The proposed changes include repealing HHS rules put in place during the Obama administration that require grant recipients to adhere to certain guidelines. Those guidelines concerned sexual orientation and gender identity, as well as recognizing same-sex marriage.

The new regulations also clarify that HHS will follow Supreme Court precedents in administering grants. However, the organizations receiving grants will not be held to standards that apply to government.

HHS issued a notice of nonenforcement on Friday regarding two provisions put in place by the Obama administration regarding grants.

“The proposed rule represents the Trump administration’s strong commitment to the rule of law, the Constitution, federal statutes, and Supreme Court decisions,” the HHS press release states. “These require that the federal government not infringe on religious freedom in its operation of HHS grant programs and address the impact of regulatory actions on small entities.”

Mara Keisling, executive director for the National Center for Transgender Equality, however, called the proposal “an abuse of taxpayer dollars in the name of empowering hatred and bigotry towards society’s most vulnerable members.”

“Stigma and prejudice are fueling a public health crisis among transgender people across the country, one that manifests itself as suicide, addiction, intimate-partner violence, and HIV,” Keisling said in a statement. “Enabling providers of life-saving services to worsen these crises by rejecting transgender people is a moral crime and a severe abdication of HHS’s mission to preserve public health.”

But HHS says the rule would “better align its grants regulations with federal statutes, eliminating regulatory burden, including the burden on the free exercise of religion.”

“Under the proposed HHS rule, faith-based adoption providers will no longer have to choose between abandoning their faith or abandoning homeless children because the government disapproves of their views on marriage,” Perkins said in a statement.