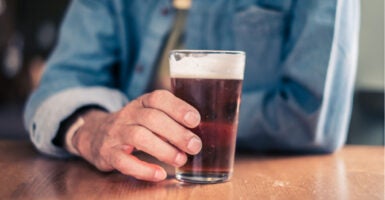 The Dietary Guidelines Advisory Committee recommends that men should drink no more than one alcoholic beverage on days when alcohol is consumed, compared to the existing recommendation of two drinks. (Photo: Verity E. Milligan/Getty Images)

Jeremy Dalrymple is a research associate with the Roe Institute for Economic Policy Studies at The Heritage Foundation.

The 2020 federal Dietary Guidelines for Americans is coming, and this development is more important than many people might think.

The agencies are currently finalizing the guidelines after recently receiving the “Scientific Report” from the influential Dietary Guidelines Advisory Committee (DGAC).

Fortunately, the agencies don’t have to adopt the DGAC’s recommendations.  The following are just three highlights connected to the DGAC’s report.

First, the current DGAC didn’t push environmental extremism similar to what happened during the 2015 guidelines process.

The last DGAC was concerned with pushing an environmental agenda to address issues like global warming and sustainability. One of the DGAC subcommittees asserted, “[t]he goal is to develop dietary guidance that supports human health and the health of the planet over time.”

The new DGAC doesn’t seem to have gone down this same environmental path, at least not to the same extent. However, the report does conflate some policy issues with science in certain sections, such as by addressing economic factors. To the extent that the report veers off its scientific purpose of providing the best nutritional advice, the USDA and HHS should ensure this doesn’t affect the final guidelines.

Second, the DGAC has made a controversial recommendation on alcohol consumption that appears to be unsubstantiated, to say the least.  Specifically, the DGAC recommends that men should drink no more than one alcoholic beverage on days when alcohol is consumed, compared to the existing recommendation of two drinks.

Dr. Samir Zakhari, chief scientific adviser from the Distilled Spirits Council of the United States, nicely captured the problem with the alcohol recommendation:

The Committee’s systematic review included just one study that examined differences amongst men consuming one versus two drinks per day. The Committee’s reliance on a single study within its review to justify halving the daily guideline for men and contradicting the true preponderance of scientific evidence defies logic.

Unless there’s much greater scientific evidence to the contrary, the USDA and HHS shouldn’t defy logic like the DGAC did with this alcohol recommendation.

Third, the DGAC recommended further reducing the amount of calories Americans receive from added sugar from 10% to 6%. This entire focus on added sugar is misleading and potentially harmful.

There is a false dichotomy being drawn between added and natural sugars. As explained in a Harvard University article, “[t]he science does not support endorsing natural sugars over their added counterparts, since these sugars have similar metabolic effects.”

The DGAC isn’t saying added sugar is bad, in and of itself. Instead, it claims it would be difficult for people to maintain a healthy diet with proper nutrition if they eat too much food with added sugar (not because of the added sugar, but because there isn’t enough “contributing additional nutrient content”).

The DGAC could just as easily have claimed that eating too much kale is a problem, not because kale is unhealthy, but if Americans eat too much kale as part of their diet, they are unlikely to obtain other nutrients needed for a healthy diet.

Ironically, this recommendation could have the unintended (but foreseeable consequence) of encouraging Americans to consume far more natural sugar, such as from fruit juices, especially when consumers see there are no added sugars. This in turn could lead to much greater total sugar consumption.

To clarify, if natural sugar in certain “packages” like fruit have different metabolic effects because of fiber, then the agencies should feel free to make this precise point. But that has nothing to do with recommending an added sugar limit.

The agencies will likely release the new Dietary Guidelines by the end of the year. Hopefully, the guidelines won’t go out on a limb making recommendations based on insufficient evidence, oversimplifying conclusions to the point of creating confusion and misunderstanding, or going beyond their narrow purpose.