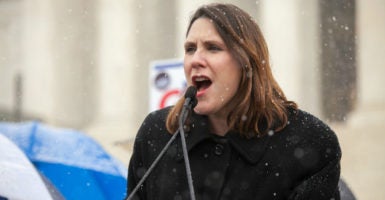 Charmaine Yoest, longtime CEO of Americans United for Life, was appointed by President Donald Trump as assistant secretary of public affairs at the Department of Health and Human Services. (Photo: White House Flickr)

President Donald Trump’s appointment of a national pro-life leader to serve as the top communicator at the Department of Health and Human Services is great news for the pro-life cause, leaders at associated organizations say.

Charmaine Yoest, longtime head of the group Americans United for Life, will assume the responsibilities of assistant secretary for public affairs at the sprawling federal agency.

Yoest, 52, will be the principal public affairs adviser to HHS Secretary Tom Price, which puts her in charge of speechwriting, strategic planning, and broadcast and digital communications.

“We are going to see a radical transformation occur within HHS,” Kristan Hawkins, president of Students for Life of America, told The Daily Signal in an interview.

“I fully expect us [as a society] to talk about … the consequences of abortion on women,” Hawkins said.

Tony Perkins, president of the Family Research Council, where Yoest worked for seven years, told The Daily Signal in an interview that she will have an important platform in the Trump administration working for Price:

In her capacity in public relations I am not sure exactly how deep she will get in policy directly, but I think indirectly she will have a huge impact making sure policies are consistent with the secretary’s vision, the president’s vision. And her knowing this [pro-life] issue inside and out, again, I think it’s going to have a significant impact.

Price, a former Republican congressman from Georgia, is himself pro-life.

From August 2008 to February 2016, Yoest was CEO of Americans United for Life, a group that seeks to advance the legal and policy issues of the pro-life movement. She has extensive experience in working for conservative, pro-life officials and organizations on the national level.

Her start date at HHS is pending. Yoest’s political experience began when, as a young woman, she was on the staff of the White House personnel office during President Ronald Reagan’s second term. She went on to work as a policy analyst and vice president of communications at the Washington-based Family Research Council. She briefly advised the 2008 presidential campaign of former Arkansas Gov. Mike Huckabee.

Her new role as assistant secretary of public affairs at HHS, which does not require Senate confirmation, includes tasks such as overseeing the agency’s public affairs programming, leading its other public affairs activities, and managing digital communications.

Yoest, who will report directly to Price, also will oversee agency responses under the Freedom of Information Act and the Privacy Act, which allow individuals to access federal records. And she will direct a division that “leads the planning, development, and implementation of emergency incident communications strategies and activities.”

Thank you so much @SpeakerRyan. Very grateful for these kind words.
And honored to be serving @realDonaldTrump and @SecPriceMD at @HHS. https://t.co/Rg8iQo6JAS

Yoest joins the new administration at an important time, Melanie Israel, a research associate at The Heritage Foundation, told The Daily Signal in an email.

“From respecting rights of conscience for health care entities to administering programs and grants, to establishing important agency regulations, there are many areas in which the Department of Health and Human Services can affirm the inherent dignity and worth of every person, from conception to natural death,” Israel said.

Jeanne Mancini, president of the March for Life Education and Defense Fund, previously worked in the Office of the Secretary at HHS. In an interview, Mancini told The Daily Signal that Yoest will have a significant role to play in the agency’s policy messaging.

“All of the different things that are happening at HHS, whether it’s through the Centers for Disease Control or National Institutes of Health or the Food and Drug Administration or the many other programs that are happening through there, Charmaine will help them with their messaging and she is very gifted at communication both digitally and in person,” Mancini said.

Planned Parenthood Federation of America, the nation’s largest abortion provider, is not supportive of Yoest’s appointment.

“It is unacceptable that someone with a history of promoting myths and false information about women’s health is appointed to a government position whose main responsibility is to provide the public with accurate and factual information,” Dawn Laguens, executive vice president of Planned Parenthood, said in a statement provided to The Daily Signal.

Yoest, Laguens said, “has spent her whole professional life opposing access to birth control and a woman’s right to a safe, legal abortion.”

Under Yoest’s leadership, Americans United for Life developed a legislative package called the Women’s Protection Project, designed to provide lawmakers with “specific legislative solutions to the growing concerns regarding the health risks to women from abortion.”

Chuck Donovan, president of the Charlotte Lozier Institute, an organization that seeks to educate society on the importance of protecting life, told The Daily Signal that such attacks on Yoest are unfounded.

“I think she is terrific,” Donovan said in an interview. “She’ll be the most knowledgeable policy person, my guess would be, to ever hold a position like that,” adding:

She’s not only a great communicator with experience [in] the media, print and broadcast, but she has written extensive policy documents. She knows the issues inside and out.