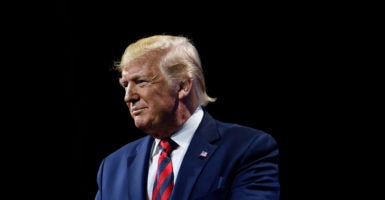 President Donald Trump and Republicans have raised strong objections to the fact that the current impeachment inquiry of Trump began with the approval of only a single person—House Speaker Nancy Pelosi. Pictured: Trump arrives to speak during the International Association of Chiefs of Police Annual Conference and Exposition Oct. 28, 2019, in Chicago. (Photo: Brendan Smialowski/AFP/Getty Images)

Why are House Speaker Nancy Pelosi and her fellow Democrats so against following historical practices in their impeachment inquiry regarding President Donald Trump?

And why—with their resolution introduced Tuesday to continue their “ongoing investigation” of the president—don’t the Democrats want to provide Republican members with the ability to fully participate in the probe?

What are the Democrats who control the House so afraid of? Do they fear the American people will discover that the Democrats are conducting an unfair, partisan investigation?

The Democratic resolution is expected to be approved by the full House on Thursday—despite strong Republican objections.

Trump and Republicans have raised strong objections to the fact that the current impeachment inquiry of Trump began with the approval of only a single person—Pelosi. She directed six different House committees to launch the impeachment probe.

Crucially, the Constitution gives the “sole Power of Impeachment” to the House of Representatives—not the speaker of the House. This is a major point that Democrats are glossing over as an insignificant technicality.

In the impeachment inquiries of Nixon and Clinton, Democrats and Republicans took a very different position than Pelosi, D-Calif., is taking today. That’s why there were votes by the entire House putting every member on record on whether an impeachment inquiry should be opened.

Page 614 of the 2017 manual on the “Rules, Precedents, and Procedures of the House”—written by the three individuals who have been the parliamentarians of the House of Representative since 1994—states that under “the modern practice, an impeachment is normally instituted by the House by the adoption of a resolution calling for a committee investigation of charges against the [federal] officer in question.”

This means that Pelosi has violated the modern practice of the House by not having the entire body vote on such a resolution.

So what about the resolution that is expected to come to a vote of the full House on Thursday? This resolution doesn’t say it is to authorize the start of an impeachment investigation, as House Res. 581 did in the case of Clinton.

Instead, the new resolution directs the six committees of the House to “continue their ongoing investigations.” But why schedule a vote on a resolution to tell committees to keep doing what they are already doing?

The new resolution also falls short of providing the type of fairness and right to participate in the investigation that the minority party—the Republicans—is asking for and is entitled to.

One of the other criticisms of Pelosi’s lack of a full House vote has been that there was no resolution setting out the rules under which the impeachment inquiry would proceed, including the rights of the minority party. Both the Clinton and Nixon resolutions did that.

Again, this is not a minor technicality. It is a major issue.

The new resolution lays out rules governing the discovery process—issuing subpoenas, submitting questions, etc.—but only for two of the six committees: the Intelligence and Judiciary committees.

So the other four committees—Financial Services, Foreign Affairs, Oversight and Reform, and Ways and Means—can continue to operate however they want to, in secret, denying the minority members the ability to fully participate.

Even in the rules set out for the Intelligence and Judiciary committees, Pelosi has changed the rules from the Clinton inquiry to, in essence, give the Democrats a one-sided advantage.

Under the Clinton resolution, H.R. 581, the chairman of the Judiciary Committee and the ranking minority member could issue subpoenas for witnesses and documents by acting “jointly.” In other words, they acted together to decide who to subpoena and what documents to obtain. If one of them disagreed, the other member had to first refer the matter to the committee before acting on his own.

The House resolution approving an investigation of Nixon, H.R. 803, had the exact same rule.

But the Pelosi resolution gives the chairmen of the Intelligence and Judiciary committees the power to act unilaterally—without the approval of the ranking Republican member.

If a Republican wants to issue subpoenas, he or she can only do so with the concurrence of the chairman—that is, the member has to ask: Chairman, may I?

If the chairman refuses to agree, the Republican can submit his or her request to the entire committee. But since the Democrats control both committees, is there really anyone out there who thinks they would override Chairmen Adam Schiff, D-Calif., or Jerrold Nadler, D-N.Y.?

One final note. There has been a great deal of discussion about witnesses being questioned in secret and the fact that members of other committees given jurisdiction over the impeachment inquiry have been barred from participating in the questioning being conducted by the Intelligence Committee.

While it is true that congressional committees sometimes question witnesses behind closed doors, there is no reason to do so here. In fact, in a matter as serious and as important as the possible removal of a duly elected president, fundamental principles of fairness and the democratic process demand that such an inquiry be conducted in as transparent a manner as possible.

Further, there is no reason for the Intelligence Committee to question witnesses in secret when there is no classified information being discussed—and the details of the telephone conversation that Trump had with the president of Ukraine are not classified. And why are members of other committees being barred from participating?

If Democrats want the American people to believe they are conducting an objective, nonpartisan investigation, they need to start acting as if they are.  The latest resolution they are proposing falls far short of doing that.