This Student Stood Up for Mike Pence Amid Leftist Protests 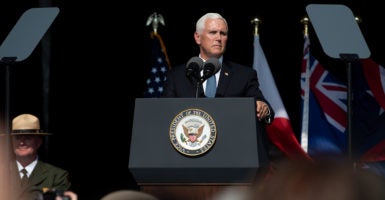 “I Like Mike” was the campaign that Taylor University freshman David Muselman created when a few progressive students tried to keep Vice President Mike Pence from visiting campus.

The vice president had been invited to deliver the 2019 commencement address at the Christian college in Upland, Indiana. When the leftist students tried to block his visit, Muselman rallied the student body in support of Pence with the I Like Mike campaign, which spread like wildfire across campus.

In this episode of The Daily Signal Podcast, Muselman sits down to discuss how the campaign was created and why he chose to stand up for the vice president. Read the lightly edited transcript, posted below, or listen on the podcast.

Virginia Allen: I am joined by David Muselman, a student and proud conservative voice on his college campus at Taylor University in Indiana. David, thanks so much for joining me.

David Muselman: Thanks for having me, Virginia.

Allen: Earlier this year, Taylor University announced that Vice President Mike Pence would be their graduation speaker in May of 2019, and there was such a backlash from the students that it made national headlines.

Now, in response to this, you launched the “I Like Mike” campaign. This was a very bold move on your part as you were willing to stand up on campus and express your support for the vice president. Why did you decide to launch the I Like Mike campaign?

Muselman: Absolutely, and thanks for that question. That’s a great question.

But first and foremost, the day our president of the university announced Vice President Pence would be speaking at commencement, everybody was thrilled. I got text messages, I got phone calls, and everybody could not believe that the vice president would be coming to speak at our university in the middle of corn fields. It’s in Upland, Indiana, it’s in the middle of nowhere, and it’s an honor to have the vice president. So that was first and foremost, everybody was thrilled.

Then after those two instances, the, what I like to call, fake media took ahold of the story and really put articles out and put other stuff out in the media saying how much Taylor doesn’t want the vice president to come speak, does not appreciate what he does, and not value his commitment and service to our country.

So that’s from the outside looking in, that’s what everybody thought. Everybody thought Taylor was a place that did not want the vice president to come. From the inside looking out, that wasn’t the case at all. It was a loud, loud, loud minority of students who were not in favor, and in fact, a ton of people on campus really, really were excited for it.

They had the vice president’s face in the middle of them, and it was so cool because … I went door to door and sold these T-shirts and a lot of people didn’t buy them at first. Then once our initial group of the people who bought them wore them around campus and got a picture, everybody wanted them.

From maintenance man, from technicians, from faculty to alumni … my phone was blowing up because … it was a FOMO, in a way, it was a fear of missing out. They all wanted to be a part of this I Like Mike campaign, so it was a great opportunity. The vice president actually met with us at commencement then.

Allen: Yeah, and I wanted to ask you about that. What was that like sitting down with the vice president, having really played an integral part of standing up on your campus and saying, “No, we want the vice president to come.”

Muselman: It was an unbelievable experience. Just having the vice president on campus is one thing, but then him being willing to meet with us and my team and the group of people that we worked with, it was humbling. You know, it was humbling.

I learned the week before that the vice president, it was not in the schedule to shake every person’s hand at commencement. He saw that and he said, “Hey, I’m shaking every person’s hand.” He didn’t have to meet with us, and he saw our article on Fox News and he said, “Hey, find those guys. I want to meet with them.” That’s just the man he is, and … I’m so thankful for that type of vice president in our country.

Allen: So what did you all talk about?

Muselman: It was awesome. He came in the room and there was probably 20, maybe a little more students. It was hard to get people back because the seniors couldn’t contribute because they were walking on the stage and a lot of seniors bought shirts. A lot of people left and so it was more the local crowd. But we were all starstruck when he came in. I mean, the vice president walking into the room was pretty humbling.

We talked a lot, we talked about a lot of stuff. He mainly talked about how thankful he was for the support and for us backing him, and we just told him how thankful we were because, really, a lot of us listening to the show even, we believe in those basic, biblically sound conservative values. But sometimes we’re not willing to stand up for those values, and Vice President Pence is an unbelievable example for standing up for those values. But then as well, is not just standing up, being willing to take the heat. Obviously, he’s taken a lot of heat in the past few years, but that’s just the man he is. He’s an unbelievable man.

Allen: Did you receive any backlash on your campus from launching the I Like Mike campaign?

Muselman: I wouldn’t say backlash, no. I did get a couple of dirty looks, and some professors don’t talk to me as much as they did because they don’t agree with what I agree with. But at the end of the day, who cares? That’s my opinion. I mean, who cares?

We got to stand firm for what we believe in, and at the end of the day, if they’re not willing to talk to us, or hang out with us, or even have a friendly conversation with us, what’s the point, you know?

Allen: Did you have a group of friends that you were all kind of launching this together, or did you really come up with this idea and spearheaded it on your own?

It was Jerice’s idea, so I mean, without Jerice, none of this would’ve happened. But it was awesome, going door to door to sell them.

Allen: Yeah, sounds like you all were … quite the team. That’s great. So what did you learn from this experience that you would like to share with other young adults?

So just bottom line, if the spirit is telling you to do something, or you feel that sense, or if you just have that gut feeling to do it, just do it. You know? Don’t think about the backlash.

We have it so easy in America and we are so blessed to live in the greatest country in the world, where in China and North Korea and other countries, it’s pretty hard. So we have it really easy and we got to remember that, and no matter what, you just got to do it.

Allen: Yeah, yeah. So David, you’re a finance major at Taylor and you have a few more years of school left, but has this experience led you to think that you might want to be more involved in policy or politics moving forward?

Muselman: I’ve got that question a lot in the last year, and as of now, I am going to stick with the business route. I’m trying to build a business, I want to do real estate with my brother. We’re best friends, we want to be real estate partners.

Muselman: But down the road, I mean, I would be interested if the situation would present itself. I’m not forcing anything, I’m going with the flow. But I’m going to start a business first and then we’ll see where the Lord takes me.

Allen: Yeah. Well, we certainly appreciate you standing up for freedom and for the vice president at Taylor, and we really appreciate your time here at The Daily Signal.

Muselman: Thank you so much, Virginia.