Even Before Ukraine Uproar, 10 of 13 Democrats on Intel Panel Backed Trump Impeachment Probe 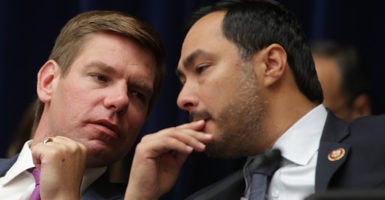 In July, Rep. Andre Carson, a member of the House Select Committee on Intelligence, voted for the then-most recent resolution calling for the ouster of President Donald Trump from office.

“I think it represents a larger, more important conversation that we need to have about … what we’re willing to tolerate as a citizenry from our commander in chief,” Politico quoted the Indiana Democrat as saying, “What responsibility the commander in chief has to the electorate in terms of not fanning the flames of Islamophobia, xenophobia, and outright hatred.”

The intelligence committee has taken the lead role in the impeachment investigation of Trump, focused on Trump’s July 25 phone call with Ukraine President Volodymyr Zelensky, in which the two leaders discussed former Vice President Joe Biden, his son Hunter Biden, and a Democratic computer server.

But 10 of the 13 Democrats on the committee discussed an impeachment inquiry, actual impeachment, and the removal of, or resignation by, Trump well before news broke of the controversial phone call.

Of the 10, three intelligence committee members—Reps. Carson;  Eric Swalwell, D-Calif.; and Peter Welch, D-Vt.—were among 95 lawmakers who voted to advance the July impeachment resolution sponsored by Rep. Al Green, D-Texas, and that time it was about Trump insulting four first-term members of the House.  The Green resolution was tabled on a bipartisan vote of 332 to 95.

In September, as news of the Trump call with the Ukraine leader broke, Carson was eager to note on Twitter his past support for proceeding with impeachment, asserting, “It may be the only way to save our Democracy.”

Congressional Republicans have criticized the closed-door impeachment-inquiry process being used by House Democrats and have complained about a lack of fairness, alleging Democrats have already made up their minds and aren’t providing the president due process.

Even before voting for the Green resolution, Swalwell, who briefly ran for the 2020 Democratic presidential nomination, announced his support for an impeachment inquiry in June.

“Impeachment is the most extraordinary remedy the Constitution affords Congress,” Swalwell said. “As a former prosecutor, I do not take this lightly. But the president continues to put his own interests above America’s. He is lawless. His relentless attacks on our rule of law and numerous efforts to obstruct justice and Congress have reached such a point to require extraordinary action. It’s time for Congress to open an impeachment inquiry into President Donald Trump.”

Welch tweeted one day after his vote for the July impeachment measure: “I have concluded that President Donald Trump should be impeached.”

Republicans have been critical of Intelligence Committee Chairman Adam Schiff, D-Calif., for fabricating the contents of the Trump-Zelensky call. After being criticized for it, Schiff defended his characterization of the call as mere “parody.”

Schiff also lied to the media when he said his staff had never had contact with the whistleblower who revealed Trump and Zelensky talked about the Bidens, according to the Washington Post’s fact-checker, which gave Schiff “four Pinocchios” and PolitiFact, which called the claim false.

While Schiff did not call for an impeachment inquiry before the Ukraine investigation, he did claim his committee had evidence of collusion between Trump’s presidential campaign and the Russian government. The report by special counsel Robert S. Mueller III concluded there was no such collusion.

Not every member of the Intelligence Committee who voted against the Green impeachment measure opposed an impeachment inquiry.

About a month before the news broke on the Ukraine call, Rep. Raja Krishnamoorthi, D-Ill., said in a statement that “no president should be impeached unless clear, substantial evidence of illegal behavior exists to sustain a conviction in the Senate.”

“That said, we have now come to a point where we must engage in an investigation to not only expose wrongdoing and prevent it from happening again, but also to determine whether the current president engaged in behavior meriting the beginning of impeachment proceedings,” Krishnamoorthi said.

Rep. Jim Himes, D-Conn., called for the start of an impeachment inquiry in June.

“During my career, I have learned that there are moments for calculation, prudence, compromise, and the careful weighing of competing interests,” Himes said in a statement. “And there are moments for clarity and conviction. This is such a moment. The time has come for the House of Representatives to begin an impeachment inquiry into President Donald Trump.”

The statement came after the release of the Mueller report, which found no conspiracy between Trump and Russia, but neither accused nor exonerated the president of potential obstruction of justice. It did identify 10 instances in which Trump expressed to aides his opposition to the investigation.

Rep. Mike Quigley, D-Ill., first announced in May after the release of the Mueller report: “What the special counsel was saying is that the ball is in Congress’s court. The president’s unacceptable obstruction of legitimate congressional investigations and his abuses of power have left Congress with only one option to continue to fulfill our constitutional responsibilities: We must open an impeachment inquiry.”

As rumors swirled that Trump might seek to fire Mueller, Speier tweeted in March 2018: “Mr. President: Here Is My Red Line—Fire Mueller And I Will Vote To Fire You.”

The Mueller report concluded, based on testimony, that Trump strongly considered firing the special counsel. However, he did not do so.

Rep. Joaquin Castro, D-Texas, told CNN in May that he supported an impeachment inquiry into Trump for lack of cooperation with congressional investigations.

That same month, Castro tweeted: “It’s time for Congress to open an impeachment inquiry. There is political risk in doing so, but there’s a greater risk to our country in doing nothing. This is a fight for our democracy.”

After Mueller testified to the House Intelligence Committee in July, Rep. Denny Heck, D-Wash., announced his support for an impeachment probe.

“I am familiar with the political arguments against initiating an impeachment inquiry based on the findings to date,” Heck said in a statement. “For example, some suggest that the Senate is highly unlikely to convict the president should the House impeach him and that his chances of re-election will therefore be enhanced.”

“That may be true. What is truer is that nothing less than the rule of law is at stake. Accordingly, I support initiation of an impeachment inquiry by the House Judiciary Committee … .”

In May 2017, Heck made a comparison between Trump’s firing of then-FBI Director James Comey that day and the Watergate scandal,  which led to the resignation of President Richard Nixon in 1974.

In May, Rep. Val Demings, D-Fla., told CNN regarding the Mueller report: “I believe it’s pretty clear that the president made numerous attempts to obstruct justice or obstructed justice. And so I believe, based on that information, as I did a month ago, that we have enough to begin those proceedings.”

In April 2018, Demings also made a Watergate comparison, tweeting:  “In 1973, President Nixon purged the Justice Department in an attempt to fire the special counsel investigating him. Less than a year later, he was forced to resign in disgrace. President Trump, take a lesson from history. You aren’t above the law.”