US Blacklists Chinese Firms for Role in Abuse of Muslim Minorities 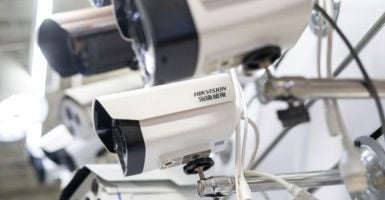 The U.S. Commerce Department added 28 Chinese firms to a trade blacklist Monday for being implicated in the abuse of Muslim minorities in China’s northwestern Xinjiang region.

The decision to blacklist 20 Chinese public security businesses and eight other companies, including a video surveillance firm called Hikvision, will effectively prevent entities from purchasing U.S. products by imposing additional license requirements and limiting the “availability of most license exceptions,” according to a Commerce Department press release.

The Commerce Department said the 28 listed firms have played a role in human rights abuses, including the “repression, mass arbitrary detention and high-technology surveillance” of Muslim minorities in Xinjiang.

“The U.S. Government and Department of Commerce cannot and will not tolerate the brutal suppression of ethnic minorities within China,” Commerce Secretary Wilbur Ross said in a statement. “This action will ensure that our technologies, fostered in an environment of individual liberty and free enterprise, are not used to repress defenseless minority populations.”

China responded to the blacklisting by saying the U.S. should stop trying to meddle in its affairs and that it will continue to take firm steps to protect its sovereign security, Reuters reported Tuesday citing Chinese Foreign Ministry spokesman Geng Shuang.

A Hikvision spokesman said in a statement that the company “strongly opposes” the move from the U.S., according to Reuters.

“Punishing Hikvision, despite these engagements, will deter global companies from communicating with the U.S. government, hurt Hikvision’s U.S. businesses partners and negatively impact the U.S. economy,” the company said.

In light of yesterday's news – the addition of several major Chinese tech/surveillance firms to a US export blacklist – here's a map from my ongoing research project on where Chinese firms have exported surveillance & policing systems: pic.twitter.com/uoQQ0b2aNk

The U.S. said the decision to blacklist these companies is not related to the ongoing U.S.-China trade war, according to The Wall Street Journal, but Center for Strategic and International Studies senior adviser for Asian economics Matthew Goodman told the Journal that China will make a connection nonetheless.

“I think the Chinese are probably going to see a connection, even if the administration says there isn’t one. … It’s going to complicate the discussions this week … the timing is going to be awkward for the Chinese,” Goodman told the Journal in reference to trade talks that are supposed to take place Thursday between U.S. and Chinese trade officials.