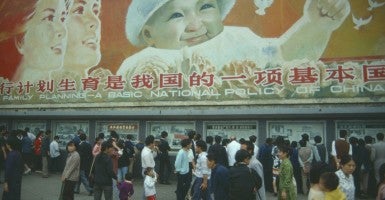 In the midst of allegations that Planned Parenthood is trafficking fetal body parts, Women's Rights Without Frontiers President Reggie Littlejohn said people should not forget about the violence against women caused by China's one-child policy. (Photo: Eye Ubiquitous/Newscom)

NASHUA, N.H.—The pro-life movement should be an international effort, according to Reggie Littlejohn, the president of Women’s Rights Without Frontiers.

Speaking at the Bringing America Back to Life conference in New Hampshire, Littlejohn said that as the American abortion debate comes to the forefront of public discourse as we wrestle with the allegations that Planned Parenthood is trafficking fetal body parts—raised by undercover videos released by the Center for Medical Progress—we should not forget the women of China who are subjected to forced abortions under the country’s one-child policy.

The “brutal, repressive Communist regime” enforces its one-child policy through state-sponsored forced abortion and infanticide, which leads to gendercide and sex trafficking.

She added that China’s one-child policy is responsible for more violence against women than any other official policy on Earth.

Family planning police abduct women and force them to submit to abortions, often performed by individuals who are not trained medical professionals, she said.

The one-child policy, coupled with a cultural preference for male children, leads baby girls to be aborted or abandoned at much higher rates than boys, causing a severe imbalance between the genders in the country’s demographics.

“It doesn’t matter whether the Chinese government allows a woman to have one child or two children. What matters is that they’re telling people how many kids they can have, and they’re enforcing that limit through forced abortion,” said Littlejohn.

She said China has the highest female suicide rate in the world, and that rate is connected to the violent enforcement of the policy, forced abortions, and the lack of value shown to women.

“We go in there and say, ‘Don’t abort your baby girl; she’s a precious daughter,’ and that’s the first time these women have ever heard that. They’ve never heard it. All they’ve heard is, ‘If you have a girl, abort her, she’s worthless.’ Which I think is also related to the female suicide rate. If you’re going to abort your baby just because she’s a girl, what does that say to you about your own right to breathe on this earth?”

Littlejohn told The Daily Signal that China has made changes to its policy, such as offering certain exceptions, in an effort to correct the gender imbalance, but the violent enforcement of the policy remains in place.

“My concern is that people are going to say, ‘Yay, it’s the end of the one-child policy,’ but forced abortions are going to continue.”