Funding by Crisis Doesn’t Have to Be the Status Quo 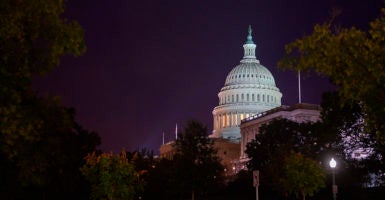 A bipartisan group of senators is working to ensure that Congress actively engages in the annual appropriations process and continues that work on it until it is finished. (Photo: Anderew Caballero-Reynolds/AFP/Getty Images)

Missed deadlines and general dysfunction have become the norm in the federal budget and appropriations process. That is a terrible trend for anyone concerned about mounting budget deficits and unsustainable federal debt.

Dysfunction doesn’t have to be the norm though. A bipartisan group of senators is working to ensure that Congress actively engages in the annual appropriations process and continues that work on it until it is finished.

On the heels of the longest government shutdown in U.S. history, the bill proposes an automatic continuing resolution that would continue federal funding even if lawmakers are unable to agree on appropriations legislation. More importantly though, the act would implement reforms to compel Congress to make the consideration of spending bills a priority.

Under current law, there are a few potential results when Congress is nearing the start of the new fiscal year and hasn’t enacted regular appropriations. As is the case this year, Congress usually passes a continuing resolution and delays funding decisions for several months. The other option is for Congress to do nothing and allow the government to partially shut down until it can agree on spending bills.

A continuing resolution merely delays the inevitable. It creates a new fiscal deadline, meaning that Congress must act again to keep the government operating.

Under an automatic continuing resolution, government funding would revert to the status quo.

The threat of a government shutdown can compel lawmakers to make ill-informed decisions, allowing bad policy to sneak through during the 11th hour. Proponents of an automatic continuing resolution believe that taking that threat off the table could mean that more deliberate negotiations can proceed, leading to better outcomes such as lower spending.

However, an automatic continuing resolution is not an ideal solution. It could be detrimental to national defense. Troop training and readiness efforts rely on a stable stream of funding. Continuing resolutions can disrupt major exercises, curtail hiring and recruitment actions, and make it harder for the military to engage in long-term planning in general.

The bill uses a three-pronged approach to compel lawmakers to more actively engage in the appropriations process. First, it incorporates Sen. Mike Braun’s, R.-Ind., No Budget, No Pay Act.

Starting Oct. 1, lawmakers’ pay would be withheld if appropriations bills hadn’t been enacted on time. Pay would not resume until Congress passed all spending bills and members would not receive any retroactive pay for the period of the lapse. The idea is that the embarrassment of missing a paycheck would compel Congress to get appropriations done on time.

Another component of the act is prohibiting Congress from recessing when it has failed to pass all appropriations bills on time. Sen. Joni Ernst, R.-Iowa, first offered this proposal in January. It would prohibit the House and Senate from adjourning for more than eight hours if not all appropriations bills for the next fiscal year were passed by Aug. 1.

Finally, if appropriations bills are not passed by August 1, the act would restrict lawmakers from traveling. This would ensure that members of Congress remain in Washington to finish the job.

These changes alone won’t fix unsustainable budgets, but they could compel Congress to more actively engage in the appropriations process.

This is an important first step in prioritizing federal funding and confronting the broader fiscal problems the country faces. Budget dysfunction doesn’t have to be the norm. Americans deserve and should demand better.