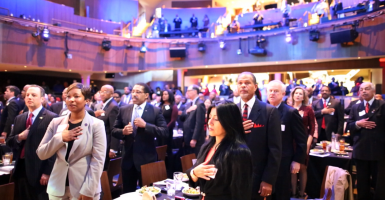 “These inspirational and remarkable individuals have made a difference not only in the Republican Party but also in people’s lives, through both their leadership and their example,” said Sharon Day, co-chairman of the Republican National Committee.

Day opened the event with a tribute to the late Republican Sen. Edward Brooke, the first black man popularly elected to the U.S. Senate. Day said members of the GOP should never forget Brooke’s legacy—from his 1966 victory in Massachusetts to his fight against breast cancer in 2002 and presidential medal of freedom in 2004.

RNC Chairman Reince Priebus, who started the awards luncheon in 2013, praised the efforts the GOP has made in the black community.

Maryland Lt. Gov. Boyd K. Rutherford, who took office Jan. 21 in the predominantly Democratic state, spoke to The Daily Signal about the progress Republicans are making with black voters.

The three honorees each shared stories about their life journey.

Scott, the first black man from the South elected to the Senate since Reconstruction, recalled that he was born and raised “by a single mother in North Charleston.” Recalling his rough childhood, he claimed to be “one of the only senators” to fail a U.S. civics class. Scott, however, claimed that the true trailblazer was his mentor, John Moniz, who now is 94, who helped him steer his life.

Love also spoke of her own trailblazing status as the first black Republican woman elected to Congress. Recalling her difficult life as a child, her mother “pointed to a line of people waiting for big blocks of cheese, she told me ‘not to take my scraped knees and your dad’s callous hands for granted. We are working so hard for you not to be somebody but to do something.’ I am here because of that lady,” Love concluded.

Hurd, Texas’ first black Republican elected to Congress, said his constituents “wanted someone to come up here and fight hard to protect our values, our border and our nation.” He claimed that his “background as an undercover CIA operative and cyber-security expert has prepared me to do just that.”

After the event, Bishop E. Charles Connor, who closed the luncheon with a benediction, spoke to The Daily Signal about the Republican Party’s ability to reach the black community with an uplifting message.