Kerry Urged to Accuse ISIS of Genocide Against Christians 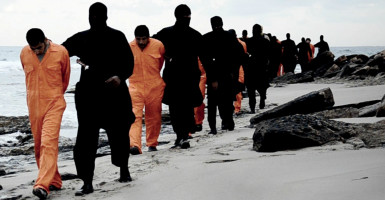 Pressure is building for Secretary of State John Kerry to include Christians in a declaration of genocide against the Islamic State, also known as ISIS.

An online petition asking Kerry to end U.S. silence about the “ongoing genocide against Christians and other minority groups in Iraq and Syria” had over 42,500 signatures as of Tuesday.

The petition is co-sponsored by the Knights of Columbus, a Catholic society founded on the principles of charity, unity, and fraternity, and In Defense of Christians, a nonprofit organization dedicated to preserving Christianity in the Middle East.

“Christians in Iraq and Syria have suffered injustice after injustice by being kidnapped [or] killed, having their homes and churches confiscated or destroyed, and being forced to flee for their lives. Because of hit squads, they fear to enter U.N. refugee camps and, as a result, are then often excluded from immigration to the West,” Supreme Knight Carl Anderson said in a formal statement, adding:

After all of this, these people deserve to have the U.S. State Department call what has happened to them by its rightful name: genocide—just as the European Parliament, Pope Francis, the United States Commission on International Religious Freedom and so many other prominent individuals and institutions have already done.

Among those who signed the petition to include Christians as victims of ISIS in a formal genocide declaration are Mark Burnett, producer of hit television programs such as “Shark Tank,” “Survivor,” and “The Apprentice”; his wife, producer and actress Roma Downey, a star of “Touched by an Angel”; Steve Forbes, chairman and editor-in-chief of Forbes Media; and evangelist Ravi Zacharias, founder and president of Ravi Zacharias International Ministries.

The petition, called “Stop the Christian Genocide,” cites the United Nations’ definition of “genocide” as killing as well as certain acts “committed with intent to destroy, in whole or in part, a national, ethnical, racial or religious group.”

ISIS has just such an intent to destroy Christians, the petition contends:

ISIS’s own public statements take ‘credit’ for the murder of Christians precisely because they are Christian and express its intent to wholly eradicate Christian and other minority communities from its ‘Islamic State.’

ISIS has declared publicly its intent to “go forth for jihad” against “the Jews, the Christians … and the proponents of democracy,” according to a fact sheet released in January by Alliance Defending Freedom International, a legal organization that advocates religious freedom.

Alliance Defending Freedom points out that the International Criminal Tribunal for the former Yugoslavia, created by the U.N. Security Council, declared a formal genocide when 20 percent of the Muslim population of the Bosnian town of Srebrenica was killed by Radislav Krstic, a Bosnian Serb general.

As many as 81 percent of the Christian population in Iraq has “disappeared either by killings or forced migration because of the ongoing persecution,” according to the fact sheet, yet no genocide has been declared.

Kerry noted in a formal statement on Iraq in August 2014 that “[ISIS’] campaign of terror against the innocent, including Yazidi and Christian minorities, and its grotesque and targeted acts of violence bear all the warning signs and hallmarks of genocide.”

Like Christians, the Yazidi people—a small religious minority that practices the ancient religion Yazidism—have been persecuted by ISIS for their non-Muslim faith.

“The distinction matters for the legal rights of these people, but also to do justice to what has been happening to them,” Andrew Walther, vice president for media, research, and development for the Knights of Columbus, told The Daily Signal.

“To say this is bad but not that bad doesn’t give this situation full weight,” he said in a telephone interview.

Kerry has until March 17 to decide whether to make a declaration, according to a provision in the omnibus spending bill passed by Congress.