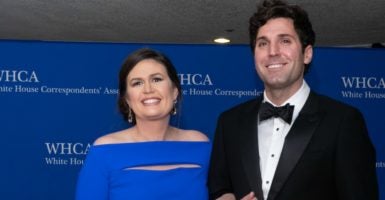 Editor’s note: Due to the ribald nature of Michelle Wolf’s set, some of the jokes in this article are crass and not family-friendly.

At the White House Correspondents’ Association dinner Saturday, comedian Michelle Wolf took aim over and over again at conservatives, including singling out White House press secretary Sarah Huckabee Sanders, who was seated one person away from Wolf’s podium.

Look: I’m not hugely familiar with past comedic performances at the dinner, but part of the point is that it should be a roast of those in power.

But as I sat listening to Wolf’s remarks, I kept thinking what a “mean girl” routine it was—and one that was rarely pointed toward the left, but frequently so to those on the right.

But judge for yourself. Here are 11 of Wolf’s jokes.

1. “And, of course, we have Sarah Huckabee Sanders. We’re graced with Sarah’s presence tonight. I have to say I’m a little star-struck. I love you as Aunt Lydia in ‘The Handmaid’s Tale.’

“Mike Pence, if you haven’t seen it, you would love it,” Wolf added.

Not familiar with who Aunt Lydia is? Well, here’s how Vanity Fair describes her in one article: “Lydia forces women into sexual servitude, tagging and herding them with an electric cattle prod, and mutilating those who step out of line.”

2. That wasn’t all Wolf had to say about Sanders. “I actually really like Sarah. I think she’s very resourceful,” she continued. “Like, she burns facts, and then she uses that ash to create a perfect smoky eye. Like, maybe she’s born with it; maybe it’s lies.

3. Thought that was it for targeting Sanders? Joke’s on you. As Sanders continued to sit in full view right by Wolf, Wolf went on to say:

And Sanders just sat there through all of this.

New York Times reporter Maggie Haberman tweeted: “That @PressSec sat and absorbed intense criticism of her physical appearance, her job performance, and so forth, instead of walking out, on national television, was impressive.”

That @PressSec sat and absorbed intense criticism of her physical appearance, her job performance, and so forth, instead of walking out, on national television, was impressive.

4. Nor was Sanders the only woman on the right Wolf viciously targeted. Here’s what she said about Kellyanne Conway, who serves as a counselor to President Donald Trump in the White House:

You guys gotta stop putting Kellyanne on your shows. All she does is lie. If you don’t give her a platform, she has nowhere to lie. It’s like that old saying: If a tree falls in the woods, how do we get Kellyanne under that tree?

I’m not suggesting she gets hurt, just stuck. Stuck under a tree.

5. Ivanka Trump also came under fire from Wolf, paired with a sexual joke about her dad:

There’s also, of course, Ivanka. She was supposed to be an advocate for women, but it turns out she’s about as helpful to women as an empty box of tampons. She’s done nothing to satisfy women. So, I guess, like father, like daughter.

She does clean up nice, though. Ivanka cleans up nice. She’s the Diaper Genie of the administration. On the outside, she looks sleek but the inside—it’s still full of s—.

michelle wolf reminds us that denigrators of women, are often women who use politics as an excuse for physical ridicule. the media calls that a "roast." if it were a conservative doing so, it would be called misogyny.

6. Sitting through this, I was most upset, however, when Wolf joked about abortion. She said:

Mike Pence is also very anti-choice. He thinks abortion is murder, which, first of all, don’t knock it till you try it. And when you do try it, really knock it. You know, you got to get that baby out of there.

And, yes, sure, you can groan all you want. I know a lot of you are very anti-abortion. You know, unless it’s the one you got for your secret mistress. It’s fun how values can waver. But good for you.

First—I have no problem mocking specific alleged pro-lifers who have chosen different values in their personal lives.

But when our nation wakes up to the fact that we legally allowed the murder of 50 million defenseless babies (and counting), I hope Wolf’s clip is played to show just how callous our culture could be.

7. Talking about the #MeToo movement, Wolf focused on the vice president … which seems like a curious choice, given all the men whose sordid behavior has been revealed. (Where was the joke about Matt Lauer?) She said:

Mike Pence is a weirdo, though. He’s a weird little guy. He won’t meet with other women without his wife present. When people first heard this, they were like, ‘That’s crazy.’ But now, in this current climate, they’re like, ‘That’s a good witness.’

So let’s recap: Pence established boundaries in his professional life. According to his own staffers, Pence’s refusal to meet alone with women who weren’t his wife had no effect on his promotion of women professionally in his office.

Mary Vought, who works on communications for The Heritage Foundation, wrote for The Washington Post last year: “Pence’s personal decision to not dine alone with female staffers was never a hindrance to my ability to do my job well, and never kept me from reaping the rewards of my work.”

And my former colleague at The Heritage Foundation, Ericka Anderson, echoed Vought’s thoughts in an op-ed headlined “I’m a Woman Who Benefited Greatly from Working for Mike Pence” in National Review. (Like Vought, Anderson once worked for Pence.)

So this guy put his marriage first and treated his female employees well.

Look, I don’t agree with the Pence rule. But it’s insane how obsessed the left is with it. Maybe it’s time to focus more on oh, actual sexual predators?

8. Wolf also took aim at Paul Ryan with the kind of comment that’s probably only been made on Twitter by #resistance accounts about a million times before: “Paul Ryan also couldn’t make it. Of course, he’s already been circumcised. Unfortunately, while they were down there, they also took his b—s.”

9. To give Wolf credit, she did have one solid zinger toward a liberal. “Al Franken was ousted. That one really hurt liberals. But I believe it was the great Ted Kennedy who said, ‘Wow! That’s crazy! I murdered a woman.’ ‘Chappaquiddick,’ in theaters now.”

10. But that was largely it for Wolf and the left. Sure, she ostensibly told a couple more jokes about the left, but they sure were less biting than those about the right. Here’s one:

People think you might flip the House and Senate this November, but you guys always find a way to mess it up. You’re somehow going to lose by 12 points to a guy named Jeff Pedophile Nazi Doctor.

So let’s recap. In a joke supposedly about liberals, Wolf managed to insult Chris Christie’s appearance (did fat-shaming become OK on the left now?) and insinuate all GOP candidates were pedophiles and Nazis.

And the problem with Democrats … is they can’t win enough to suit Wolf?

11. Let’s go through one more joke to show the difference between treatment of the right and left. Here’s what Wolf said about MSNBC anchor Rachel Maddow:

We cannot forget about Rachel Maddow. She is the Peter Pan of MSNBC. But instead of never growing up, she never gets to the point. Watching Rachel Maddow is like going to Target. You went in for milk, but you left with shampoo, candles, and the entire history of the Byzantine Empire.

And here’s what she had to say about former Fox News anchor and now “Today” host Megyn Kelly:

And, of course, Megyn Kelly. What would I do without Megyn Kelly? You know, probably be more proud of women.

So let’s recap: Maddow rambles when she talks and shares too much information, and Kelly … lets all women down and is too white and cold.

Again, the White House Correspondents’ Association dinner’s comedic performance is meant to roast—which is why I’ve largely not included jokes about Trump himself. But what was striking about Wolf’s performance was the personal nastiness of many of her “jokes,” as well as the hyperfocus on the right when it came to criticism.

Matt Schlapp, chairman of the American Conservative Union, tweeted:  “My wife [White House director of strategic communications Mercedes Schlapp] and I walked out early from the [White House] correspondents dinner. Enough of elites mocking all of us.”

My wife @mercedesschlapp and I walked out early from the wh correspondents dinner. Enough of elites mocking all of us

As a conservative who was there, that was indeed what it felt like—although I’ll note the audience of journalists, many of whom I’m sure try to fairly cover both sides, often seemed uncomfortable with Wolf’s jokes.

Thankfully, there’s already been a backlash to Wolf.

Couldn’t agree more. So much important and amazing journalism this year — that should be the focus, when truth matters and is needed more than ever. It was an embarrassment in the room and surely to the audience at home. https://t.co/vhbnG6tn55

The spirit of the event had always been jokes that singe but don’t burn. Reporters who work with her daily appreciate that @presssec was there. https://t.co/PorH9jGJ7G

On “Good Morning America” Sunday, White House Correspondents’ Association board member and ABC chief news correspondent Jon Karl said: “I think that the comedian crossed the line and this went from poking fun to being mean-spirited.”

If journalists want to show the White House they’re serious about covering the administration fairly, it’s time to condemn Wolf—and perhaps go with Trump’s suggestion and announce a conservative like Gutfeld as next year’s comedian.

While Washington, Michigan, was a big success, Washington, D.C., just didn’t work. Everyone is talking about the fact that the White House Correspondents Dinner was a very big, boring bust…the so-called comedian really “bombed.” @greggutfeld should host next year! @PeteHegseth