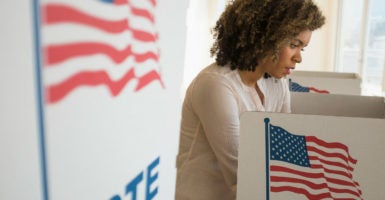 “We’re the party that understands Washington can’t run your life better than you can run your life,” the chairman of the College Republican National Committee says. (Photo: Tetra Images/Newscom)

Four years after a wave of millennials swept Barack Obama into his second presidential term, the Republican Party is redoubling efforts to repackage its conservative platform to appeal to young voters.

A new report from the College Republican National Committee, “Growing Up GOP: Fresh Ideas From the Fresh Faces of the Republican Party,” outlines strategies the GOP needs to undertake to accomplish just that.

“We’re the party that understands Washington can’t run your life better than you can run your life,” Alexandra Smith, national chairman of the College Republican National Committee, writes in the report’s opening letter. “So why don’t more millennials vote Republican? Simple: The Grand Old Party has gotten stale.”

With a mind toward confronting that staleness, the “Growing Up GOP” report, produced in partnership with the Republican State Leadership Committee and New Republican, identifies possible policy and messaging inroads designed to bridge that voter gap.

A change of messaging is of particular importance because, the report argues, millennials already tend to share certain core GOP values, such as a desire for freedom and self-determination and a skepticism of central authority. But the way their elders traditionally express these values can prove a turnoff to a youth bloc that frames its political problems in different ways.

For example, according to the report’s polling, 45 percent of millennials—defined for this poll as adults age 18 to 29—“think hard work is what gets you ahead in America these days.” But 49 percent say luck and connections are the greater share of success.

As a result, young voters tend to be unimpressed by Republican messaging that “extols the virtue of hard work and fights against a culture of victimhood.”

By contrast, the report promotes “an opportunity to connect by talking about what is creating social and economic immobility and how to break down barriers, many of which are rooted in a centralized, top-down government that has fallen down on the job.”

“We’re the party that understands Washington can’t run your life better than you can run your life.” —Alexandra Smith

The report also reflects the specific emphasis millennials place on issues that tend to be outside the current Republican playbook, with “aggressive action to ensure racial and gender equality” closely followed by “giving students new ways to pay for college,” “raising teacher salaries and school funding,” and “reducing income inequality.”

“An agenda to reach young Americans absolutely must include answers and ideas that apply Republican principles to tackling these core challenges,” the report says.

At the same time, “Growing Up GOP” pushes back against the notion that young voters just want free handouts from the government. Those attending focus groups for the report resonated more strongly with the notion of “giving students new ways to pay for college” than with simply increasing government subsidies for higher education.

David Azerrad, the director of The Heritage Foundation’s B. Kenneth Simon Center for Principles and Politics, warned against banking too heavily on the potentially fleeting viewpoints of the young.

“It is important to remember that millennials, like all previous generations of young Americans, will change their political views over the course of their lives,” Azerrad said.

He added: “Getting married, having children, and moving out of the city has been known to change people’s political outlook in a more conservative direction.”

In the end, specific policy proposals are far from the focus of “Growing Up GOP.” The report’s biggest conclusion is one of emphasis: A “framework of openness and bottom-up problem solving,” as opposed to a top-down administrative solution to problems, will strike a chord with young voters. The report says:

If we love freedom and want to preserve it, we cannot limit our understanding of it to history books. We must understand how it lives today. The darkness infecting today’s politics is an opportunity for those of us who love liberty to light a new and more promising path.

The polling, conducted over the internet, surveyed 800 adults ages 18 to 29 from April 19 through 29. The margin of error was plus or minus 5 percent.