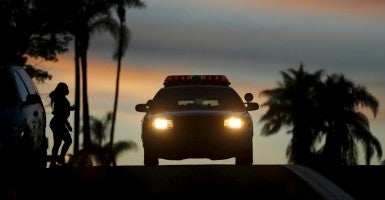 In an effort to stop California from reforming its civil asset forfeiture laws, the California District Attorneys Association warned lawmakers the current proposed reforms could lead to the loss of millions of dollars from the federal government. (Photo: Mike Blake/Reuters/Newscom)

The federal government is trying to deter California from reforming its laws governing how police can seize cash and property.

The reforms to the state’s civil asset forfeiture laws could mean the loss of millions of dollars from a program run by the federal government.

Documents obtained by the Institute for Justice show that the California District Attorneys Association has been circulating emails from the Justice and Treasury Departments confirming that the current reforms proposed to California’s civil asset forfeiture laws would make the state ineligible to receive millions of dollars through the federal government’s Equitable Sharing Program.

“This is a desperate and cynical attempt to derail civil forfeiture reform in California,” Lee McGrath, the Institute for Justice’s legislative counsel, said in a statement. “Discussions of dollars and cents have no place in the debate about criminal justice reform, nor do ‘desire’ or technical incapability on the part of the federal government.”

“I highly doubt our federal agencies can figure out whether a conviction occurred in any timely manner,” Nasrah wrote. “I’m not sure they would have the resources, desire, or technical capability even [if] they have the first two.”

Nasrah went on to tell Carter that the “legislation, in effect, takes decision-making authority away from the Treasury.”

“Accordingly,” she continued, “I think I would still advise our policy officials here that it would be prudent to not share with CA agencies should this law be passed.”

>>> In 12 Oklahoma Counties, Millions Seized From Property Owners Who Were Never Charged With Crimes

“A transfer to a state-controlled fund would not be a permissible use of funds, especially when that central fund would redistribute money to all law enforcement agencies in the state, regardless of their eligibility or participation in the program,” Dery wrote.

The California legislature is currently debating legislation that would reform the state’s civil asset forfeiture laws. If signed into law, law enforcement would be allowed to forfeit property and money only if a property owner is convicted of a crime. The legislation also prohibits law enforcement agencies from transferring seized property and cash to the federal government.

Under the proposed reforms, law enforcement agencies are entitled to the proceeds from cash or money seized through Equitable Sharing only if the property owner is convicted of a crime.

The California Senate passed the proposed reforms, 38-1, and the state Assembly is set to debate the changes this week.

However, members of the law enforcement community are pushing back on the legislation.

In an August letter to California state senators obtained by the Institute for Justice, the California District Attorneys Association spoke out against the reforms.

“The current version of the bill would essentially deny every law enforcement agency in California direct receipt of any forfeiture assets,” Sean Hoffman, director of legislation for the California District Attorneys Association, wrote in the letter. “California’s asset forfeiture law will be changed for the worse, and it will cripple the ability of law enforcement to forfeit assets from drug dealers when arrest and incarceration is an incomplete strategy for combatting drug trafficking.”

Civil asset forfeiture is a tool that gives law enforcement the power to seize property and money if they are suspected of being tied to a crime. Asset forfeiture was originally intended to combat money laundering and drug trafficking, but police departments have been increasingly using the tool to pad their budgets in difficult fiscal times.

In addition to California, state lawmakers in Michigan, Pennsylvania, and Oklahoma have been debating changes to their state civil asset forfeiture laws.

In response to the reforms, New Mexico is no longer eligible for the federal government’s Equitable Sharing Program, according to emails from the Treasury Department.

“These emails make it clear that the [Department of Justice] is trying to make an example of New Mexico and ward off other states from curtailing the federal government’s ability to forfeit private property without first obtaining a criminal conviction,” McGrath said.