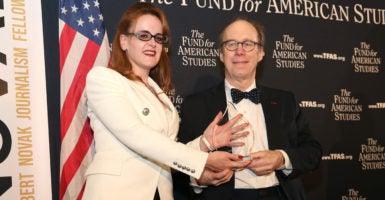 Roger Kimball, editor and publisher of The New Criterion, has won a career achievement award from a prominent leadership development organization.

The Fund for American Studies hosted its annual Journalism Awards Dinner to honor young journalists for their contributions and feature projects made possible by the organization.

The dinner Thursday night at the Metropolitan Club in New York City showcased the work of journalists young and old, highlighting projects devoted to ideas of “limited government, free-market economics, and honorable leadership.”

The New Criterion’s Kimball received the 2019 Thomas L. Phillips Career Achievement Award. Besides overseeing the monthly literary magazine, he is a frequent contributor to other publications in America and the U.K., including The Wall Street Journal, The New York Times Book Review, and National Review.

“Roger stands proudly on the front lines in the battle to defend civilization,” said Rebekah Mercer, president of the Mercer Family Foundation and a board member of The Heritage Foundation, who presented the Phillips award to Kimball.

“Language matters,” Kimball said during his acceptance speech. “Achieving the accurate representation of the world is not only a linguistic desideratum, it is also a political imperative.”

Kimball also honored the legacy of Joseph Rago, an editorial writer for The Wall Street Journal who died unexpectedly in 2017 at age 34. The Fund for American Studies presented a fellowship in Rago’s memory to Matthew Taylor King, a young journalist who will get an internship at the Journal.

“Much of our culture has collided against the accurate representation of the world,” Kimball added. “We owe The Fund for American Studies a great debt for understanding what is at stake in the seemingly pedestrian activity of telling the truth. Long may it prosper.”

Their projects included stories on the unexpected side effects of birth control, the rampant growth of the federal workforce, and changes to America’s foreign policy regarding China.

Gigot went on to criticize the state of modern media, stressing that unbiased journalists are more valuable than ever.

“In this period of political polarization, so many journalists these days have moved into political camps—one side or the other—and define themselves by partisan loyalties,” Gigot said.

Gigot held up Rago as an example of principled journalism before handing over the microphone to Rago’s father, Paul Rago, who offered a statement in his son’s memory.

The Fund for American Studies, which offers leadership programs for students entering the world of public policy and media, hosts its journalism awards dinner each year in New York City as a way to honor what it considers to be top-notch journalism.