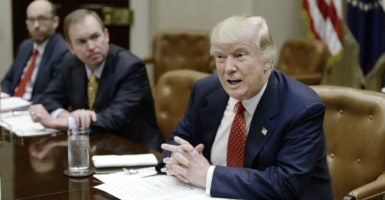 President Donald Trump released his federal budget blueprint on Monday, Feb. 27, calling for an increase in defense spending and a corresponding cut to some international and domestic programs. (Photo: Olivier Douliery/SIPA/Newscom)

According to multiple news reports, President Donald Trump’s budget proposal will include a $54 billion increase for defense spending that will, in part, be offset by cuts to the budgets for the Department of State and foreign assistance.

This has led a number of foreign policy and defense experts to express concern. Again according to news reports, the State Department could see a 30 percent cut in its budget.

A reduction of this size will doubtlessly be disruptive, but before concern turns into alarm, there are a few things that should be kept in mind.

First, no one has reported on the details of the proposal. Although news reports indicate that the cuts are believed to be about 30 percent of the State Department budget, these reports are based on anonymous sources and may not be accurate, and it is unclear exactly what budgets are being discussed. Other news stories have been off base.

Thus, we need more details from official sources clarifying the budget proposal. Will the budget actually propose a 30 percent reduction? Does the 30 percent cut apply immediately or over several years? If it is applied immediately, what specific programs will be the focus of the cuts? After the cuts, will normal budget increases resume the next fiscal year so that new funding will be applied to address new or ongoing priorities?

Until we know the answers to these questions, it is hard to assess the impact of the proposed budget reductions on the Department of State, the U.S. Agency for International Development, or other international affairs programs.

Second, what does this mean in budget terms? The Fiscal Year 2017 Congressional Budget Justification for the Department of State, Foreign Operations, and Related Programs estimates that the fiscal year 2016 Budget of International Affairs was $54.6 billion. Assuming that the fiscal year 2017 budget under the continuing resolution maintained that funding level, a 30 percent cut to the International Affairs Budget will mean a $16.4 billion decrease. But it needs to be put in perspective. Looking back at previous budgets as listed in the table above, the 30 percent cut would return the International Affairs Budget to levels last seen at the end of the George W. Bush administration. And the International Affairs Budget during the Bush administration was hardly austere. To the contrary, it grew substantially from 2000 to 2008.

There is no doubt that the reduction proposed by Trump would require significant adjustments in programs and priorities that have swollen under the expanded budgets enacted during the Obama administration. An option that would have less immediate effect would be to gradually apply the reductions over several years.

But even then, we would be hearing the same complaints. The plain truth is that agencies are always going to squawk and complain about budget reductions. Just look at the reaction to the more modest budget constraints enacted under the budget sequestration.

But cuts can be valuable in refocusing agencies on core priorities.

Third, those expressing concerns about the cuts seem to believe that current funding is well spent, vital, and focused on core national interests. But that may not be the case.

The fiscal year 2017 version sought to increase this focus even further. Certainly some funding on these issues is warranted, but cuts in foreign assistance focused on these issues would not endanger core U.S. national security interests.

Finally, what is the purpose of the budget proposal? It is important to know that Congress is the branch of government that passes the budget. Is Trump’s budget proposal intended to be an initial bid in what are likely to be difficult budget negotiations? If so, it certainly makes sense to bid low to arrive at the negotiated result desired.

As with much of the past month since Trump’s inauguration, people are jumping to conclusions with little information. Budget reductions at the Department of State and at other international affairs agencies are not necessarily a threat to the security of the U.S., nor would they necessarily impede the ability of the State Department to fulfill its core diplomatic mission.

Before passing judgement, we should take a big-picture look and wait for the details.