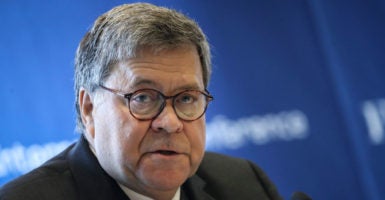 The documents, if released, would shed light on the FBI’s assessment of the Steele dossier, as well as information related to confidential human sources that the FBI used to gather intelligence from the Trump campaign.

“In order for the Inspector General to be able to present the most complete results of his investigation to Congress and the American people, certain documents will need to be declassified and released to the public,” Graham wrote to Barr in a letter released Tuesday.

“I write to urge you to declassify all documents the Inspector General identifies as appropriate for declassification as much as possible, without harming national security.”

Michael Horowitz, the Justice Department inspector general, is believed to be close to releasing a report of his office’s investigation into whether the FBI and Justice Department abused the FISA process regarding Carter Page, a former Trump campaign adviser.

The FBI and DOJ relied heavily on the dossier in applications for four FISA warrants against Page. Christopher Steele, a former British spy, compiled the dossier on behalf of the Democratic National Committee and Clinton campaign.

The FBI cited the dossier in the FISA applications even though many of Steele’s claims were unverified. Other allegations that Steele made have been undercut by the special counsel’s probe. The special counsel determined there was no evidence that the Trump campaign conspired with Russia to influence the 2016 election. Steele alleged Trump associates, including Page, were part of a “well-developed conspiracy of co-operation” with the Kremlin.

Graham described the nine categories of information in his letter to Barr:

Republicans have long alluded to FBI transcripts of conversations between at least one confidential informant and George Papadopoulos, a former Trump campaign aide. Republicans familiar with the transcripts have said they contain exculpatory information for Papadopoulos, who had contact with Stefan Halper, a former Cambridge professor and longtime FBI informant.

Graham’s list also refers to a chart the FBI is believed to have used to track allegations made in Steele’s dossier. The document would likely show how the FBI investigated the claims made in the dossier, and how it assessed the report.

Republicans have also accused the FBI of failing to disclose to the FISA Court that Steele openly opposed Donald Trump’s candidacy. Bruce Ohr, a Justice Department official who had close contact with Steele, told the FBI the former spy said he was “desperate” to see Trump lose the election.

Steele also had repeated contacts with the media as part of an effort to disseminate damning allegations against the Trump campaign prior to the election.

The FBI released a few heavily redacted documents related to Steele. The documents showed investigators had only “medium” confidence Steele’s dossier was accurate.

They also showed that while Steele was considered a reliable source of information, the FBI cut ties with him Nov. 1, 2016, because he had unauthorized contacts with the media. Despite that, the FBI continued citing Steele’s work in the FISA applications against Page.

Graham also seeks information related to any FISAs granted against any additional Trump associates. So far, the FBI has only confirmed the existence of FISAs against Page.