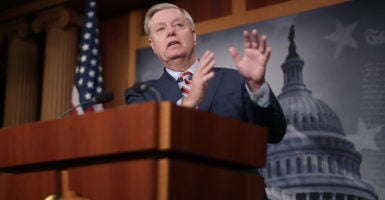 Senate Judiciary Chairman Lindsey Graham, R-S.C., announced his committees will launch a probe into the Justice Department’s alleged abuse of spying, widely believed to be the predicate for investigations into alleged ties between President Donald Trump and Russia.

“I’m going to get answers to this. If no one else cares, it seems that Republicans do,” Graham said at a Capitol Hill press conference Monday. “Because if the shoe were on the other foot, it would be front-page news all over the world. The double standard here has been striking and, quite frankly, disappointing.”

Graham’s announcement comes after special counsel Robert Mueller’s report concluded his 675-day investigation that determined there was no such collusion, as many critics of Trump have alleged without evidence.

A House Intelligence Committee memo in 2018 asserted that the use of the Foreign Intelligence Surveillance Act (FISA) warrant to spy on former Trump campaign aide Carter Page prompted the investigation. The memo contended that the basis for the warrant was the Steele dossier, an unverified opposition research document against Trump.

Graham said he would like to see a special prosecutor appointed to investigate the matter.

“I’d like to find somebody, like a Mr. Mueller, that can look into what happened with the FISA warrants, the counterintelligence investigation. Am I right to be concerned?” Graham said.

“It seems pretty bad on its face—but there are some people that are never going to accept the Mueller report, but by any reasonable standard, Mueller thoroughly investigated the Trump campaign. You cannot say that about the other side of the story,” Graham continued.

Graham noted he has called for the appointment of another special counsel since 2017.

“I hope Mr. Barr will appoint somebody outside the current system to look into these allegations, somebody we all trust, and let them do what Mueller did,” Graham said.

Before William Barr took the helm in his second run as attorney general in February, his predecessor named U.S. Attorney John Huber of Utah to work with the Justice Department’s Office of Inspector General to investigate potential improper or criminal conduct regarding FISA and related matters by the Justice Department during the Obama administration.

However, Graham is seeking a prosecutor outside of the Justice Department.