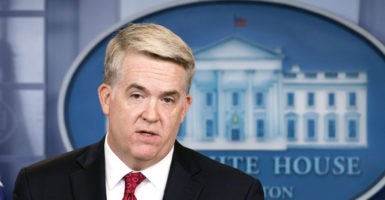 While Attorney General Jeff Sessions has decided to hold off on naming a second special counsel, he reached well outside Washington for a federal prosecutor to investigate possible wrongdoing by the FBI and Justice Department.

“The [Justice] Department is not above criticism and it can never be that the department conceals errors when they occur,” AG Jeff Sessions says.

Sessions announced Thursday in a letter to members of Congress that, rather than name another special counsel, he has tapped Utah U.S. Attorney John Huber to work with the Justice Department’s inspector general to review multiple issues of Justice Department and FBI conduct.

The conduct under scrutiny occurred during the Obama administration as FBI and Justice officials investigated matters connected with 2016 presidential candidates Donald Trump and Hillary Clinton.

“We understand that the [Justice] Department is not above criticism and it can never be that the department conceals errors when they occur,” Sessions said in the letter to Senate Judiciary Chairman Chuck Grassley, R-Iowa; House Judiciary Chairman Bob Goodlatte, R-Va.; and House Oversight and Government Reform Chairman Trey Gowdy, R-S.C.

“I am confident that Mr. Huber’s review will include a full, complete, and objective evaluation of these matters in a manner that is consistent with the law and facts,” Sessions wrote, adding:

Huber will work in coordination with Justice Department Inspector General Michael Horowitz, who has been examining related issues, Sessions said.

Here are five sets of background information about Huber and his investigation:

President Barack Obama nominated Huber, then 47, to serve as U.S. attorney for Utah in 2015, and he was confirmed by the Senate that June.

Huber offered his resignation in March 2017 to allow the new Trump Justice Department to decide his fate. The administration decided to keep him.

Last June, Trump renominated Huber for the position and the Senate confirmed him in August by a unanimous vote.

Huber gained some national prominence in the Justice Department before his appointment as U.S. attorney. Two previous U.S. attorneys general, John Ashcroft in 2004 and Eric Holder in 2010, recognized his prosecutorial efforts, according to the department.

While serving as U.S. attorney, Huber was on the Attorney General’s Advisory Committee under both the Obama and Trump administrations. In 2017, Sessions named Huber vice chairman of the panel.

A 1995 graduate of the University of Utah S.J. Quinney College of Law, Huber began his career as a prosecutor in the office of the county attorney of Weber County, Utah. He later served as chief prosecutor for West Valley City, Utah.

Huber became an assistant U.S. attorney in 2002, and earned a national reputation for prosecutions of violent crimes and expertise in national security issues.

Special counsel Robert Mueller, a former FBI director, is probing alleged collusion between the Trump campaign and the Russian government during the 2016 election season.

After Sessions recused himself because of his own advisory role in the campaign, Deputy Attorney General Rod Rosenstein selected Mueller as special counsel in part because he was not currently working in the Justice Department.

Sessions’ choice of a prosecutor inside the Justice Department but outside Washington is similar to past precedents. One difference is that Huber will be working with Horowitz, the department’s inspector general.

Inspectors general have investigative power within a single agency, in this case the Justice Department. But an inspector general can’t prosecute individuals or subpoena information.

As a prosecutor, Huber can expand the investigation into individuals or institutions outside the Justice Department itself. A prosecutor has the power to call a grand jury to subpoena information and issue indictments.

This is similar to the Bush administration Justice Department’s appointment of Patrick Fitzgerald, a U.S. attorney from Illinois, to investigate the leaking of CIA employee Valerie Plame’s name.

4. On His Investigative Plate

The Sessions letter comes just days after the department announced that the inspector general was investigating how the FBI applied the Foreign Intelligence Surveillance Act to spy on a former Trump campaign aide, Carter Page.

The FBI obtained a warrant that relied heavily on an opposition research document—the Christopher Steele dossier—funded by Clinton and the Democratic National Committee.

A declassified House intelligence committee memo alleged that FBI and Justice officials did not fully inform the FISA court that information they used in seeking the warrant to spy was based on a political document.

Acting on the recommendation of the Justice Department’s Office of Professional Responsibility, Sessions fired Andrew McCabe as FBI deputy director for allegedly lying to the inspector general about media leaks.

McCabe said former FBI Director James Comey authorized media leaks. Days before being fired by Trump, Comey testified under oath to the Senate Judiciary Committee that he did not leak or direct leaks.

Uranium One, a Russia-connected firm that had close ties to the Clinton Foundation, also is expected to be part of the probe, the Salt Lake City Tribune reported.

Rosenstein was the U.S. attorney for Maryland in 2004, and prosecuted Uranium One associates.

“U.S. Attorney John Huber is a capable public servant and a man of great integrity,” Lee said in a written statement to The Daily Signal.

Hatch, the senior senator from Utah, praised the selection.

“Attorney General Jeff Sessions revealed today in a letter to Congress that United States Attorney John Huber, Utah’s top federal prosecutor, has been leading the investigation of certain issues related to actions by the Department of Justice in 2016 and 2017,” Hatch said in a public statement, adding:

Mr. Huber brings decades of experience to his latest, and now very public, assignment. Most importantly, he brings the independent perspective of an accomplished federal prosecutor who has spent his career far removed from the politics of Washington. Attorney General Sessions has picked the right man for the job. I am confident that Mr. Huber will perform these duties with the utmost integrity, and I look forward to learning the results of his work at the appropriate time.

Two House chairmen who asked for a special counsel said naming Huber to review the matter was a step in the right direction.

In a joint statement, Goodlatte and Gowdy said:

While we continue to believe the appointment of a second special counsel is necessary, this is a step in the right direction. We expect that U.S. Attorney Huber, given his reputation, will conduct an independent and thorough investigation. Such an investigation is critical to restoring the reputation of both the [FBI] and DOJ in the eyes of the American people.

In the meantime, we intend to continue our investigation into the decisions made and not made by DOJ in 2016 and 2017.