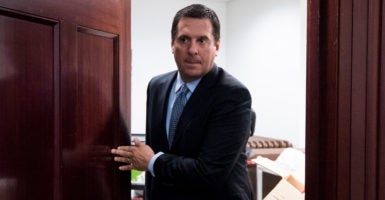 Rep. Devin Nunes, R-Calif., leaves a House Republican Conference meeting Dec. 5 in the Capitol. Nunes is chairman of the House intelligence committee, which followed through Friday on releasing a declassified memo pertaining to FBI and Justice Department actions in opening the Russia probe. (Photo By Bill Clark/CQ Roll Call/Newscom)

Opposition research against Donald Trump, funded by Hillary Clinton’s presidential campaign and the Democratic National Committee, was an essential element to the Obama administration’s application to spy on a Trump associate, according to a declassified memo released Friday by the House intelligence committee.

FBI and Justice Department officials did not disclose to a federal judge the source of the information used to justify a surveillance warrant for one-time Trump campaign aide Carter Page under the Foreign Intelligence Surveillance Act.

The memo reports that Steele told Ohr that “he was desperate that Donald Trump not get elected and was passionate about him not being president.”

Steele produced the so-called dossier containing embarrassing but unverified information about Trump’s past dealings in and with Russia. He collected the information from June through December 2016.

Trump, who cleared the memo for release, spoke briefly about it to the White House press pool Friday morning.

Asked if he still had confidence in Deputy Attorney General Rod Rosenstein, named in the memo as signing off on the FISA warrant, Trump told reporters: “You figure that one out.”

Rep. Devin Nunes, R-Calif., chairman of the House Permanent Select Committee on Intelligence, strongly advocated release of the four-page memo after helping compile some of the information in it.

“The committee has discovered serious violations of the public trust, and the American people have a right to know when officials in crucial institutions are abusing their authority for political purposes,” Nunes said in a written statement. “Our intelligence and law enforcement agencies exist to defend the American people, not to be exploited to target one group on behalf of another.”

Ohr told fellow Justice Department officials about Steele’s bias, according to the memo.

The FBI generally is viewed as a nonpartisan, as is law enforcement in general, so top officials’ exercising  of political bias is seen as unusual.

The memo is only a glimpse at the origins of the Russia investigation that Democrats have encouraged as it overshadowed Trump’s first year in office.

Although the memo says the Steele dossier was “essential” to obtaining the FISA order, it doesn’t say that document was the only evidence presented to the judge by the Justice Department and the FBI.

Rep. Adam Schiff, D-Calif., the ranking Democrat on the intelligence committee, is pushing for release of a counternarrative from the panel’s Democrats, which asserts the dossier was not the basis for the investigation. Schiff tweeted:

We’ll fight to release our classified response. Until then here’s a glimpse at what’s wrong with their memo: pic.twitter.com/HX0J6UtDLY

“The [Republican] memorandum raises serious concerns about the integrity of decisions made at the highest levels of the Department of Justice and the FBI to use the government’s most intrusive surveillance tools against American citizens,” Sanders said, adding:

This decision was made with input from the president’s national security team—including law enforcement officials and members of the intelligence community, for whom the president has great respect. … Minority members of the committee have reportedly drafted a separate memorandum. The administration stands ready to work with Congress to accommodate oversight requests consistent with applicable standards, including the need to protect intelligence sources and methods.

The declassified memo asserts that “the public’s confidence in the integrity of the FISA process depends on the court’s ability to hold government to the highest standard—particularly as it related to surveillance of American citizens.”

In the case of Carter Page, the government had at least four independent opportunities before the [FISA court] to accurately provide an accounting of the relevant facts. However, our findings indicate that, as described below, material and relevant information was omitted.

The Clinton campaign and the Democratic National Committee paid $169,000 to Steele, a longtime FBI source, through the law firm of Perkins Coie and opposition research firm Fusion GPS to find dirt on Trump. Fusion GPS also employed the wife of Ohr, the Justice Department official who met with Steele.

“The application [to the FISA court] does not mention Steele was ultimately working on behalf of—and paid by—the DNC and Clinton campaign, or that the FBI had separately authorized payment to Steele for the same information,” the memo states.

McCabe temporarily served as acting head of the FBI after Trump fired James Comey in May.

McCabe played a role in the FBI investigation of Clinton’s use of a private email server to conduct official business as secretary of state. His wife’s losing Virginia state Senate campaign in 2015 was heavily financed by a political action committee run by former Virginia Gov. and longtime Clinton ally Terry McAuliffe.

While the FISA application relied on Steele’s past record of credible reporting on other unrelated matters, it ignored or concealed his anti-Trump financial and ideological motivations. Furthermore, Deputy Director McCabe testified before the committee in December 2017 that no surveillance warrant would have been sought from the [FISA court] without the Steele dossier information.

So did Rosenstein, the No. 2 official at Justice, who named Mueller as special counsel when Attorney General Jeff Sessions recused himself from the Russia probe because of his advisory role in the Trump campaign.

Shortly after the announced release of the memo Friday, the document was not accessible on the House intelligence committee’s website because of heavy traffic. It eventually was restored.

Page, an oil industry consultant, was a volunteer adviser to the Trump campaign. After getting an initial warrant concerning him, the FBI obtained three renewals from the FISA court.

The FBI severed ties with Steele after the former British intelligence officer revealed his relationship with the bureau to the media.