Under Shadow of War With Russia, Ukraine Celebrates Independence 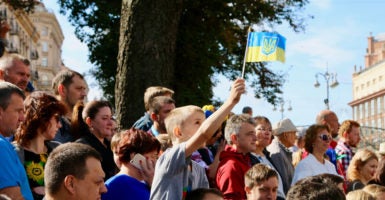 On its Independence Day, Ukraine marks 28 years since the country split from the Soviet Union. (Photo: Nolan Peterson/The Daily Signal)

KYIV, Ukraine—Ukraine’s celebration Saturday of its Independence Day marks 28 years since the country split from the Soviet Union.

But freedom hasn’t come easy for Ukraine. And the country’s freedom struggle isn’t over.

For more than five years, Ukrainian troops have been bogged down in a war in the country’s eastern Donbas region, where they face a combined force of Russian regulars, pro-Russian separatists, and foreign mercenaries.

“Our state and independence exist because of you,” Ukrainian President Volodymyr Zelenskyy said Friday, speaking at an event honoring military veterans. “What you have done for Ukraine, for its independence, for the protection of our sovereignty, is simply invaluable.”

The Donbas war has killed more than 13,000 Ukrainians and displaced 2 million from their homes.

Despite a February 2015 cease-fire known as Minsk II—named after the Belarusian capital where the accord was signed—the war in Ukraine never ended. More than half the fatalities occurred after the cease-fire went into effect. And, on average, one Ukrainian soldier still dies every three days in combat.

Today, the war is limited to an entrenched, static front line in the Donbas. The physical effects of combat are limited to the ranges of the weapons used.

And beyond the front lines in the Donbas, Russia’s so-called hybrid war affects all of Ukraine—a testing ground, some experts say, for the Kremlin’s “gray zone” activities against the West.

This year, Ukrainian Independence Day is about more than commemorating a date.

Saturday’s celebration was to be a statement, affirming Ukraine’s cultural divorce from Russia, and one more step toward ditching its Soviet past.

But not this year. Zelenskyy canceled the military parade, opting instead for an outdoor concert.

“This year Ukraine will celebrate Independence Day in a new format. Instead of the Soviet-style traditional parade with an expensive showcasing of military hardware on the capital city’s central street, the Procession of Dignity will take place,” Andriy Bohdan, head of the Office of the President of Ukraine, said in a July 30 press conference announcing the change.

“This European-style event is designed to create a new tradition of honoring everyone Ukraine is proud of,” Bohdan said.

Members of Ukraine’s armed forces were to be awarded bonuses from the roughly $11.9 million saved by canceling the parade. Cadets and new conscripts were to get about $40. Troops in the war zone or who served in combat in 2019 were to receive an $80 bonus.

Zelenskyy’s move was met with mixed reviews among some Ukrainian war veterans.

“Personally, for me, the president’s decision to cancel the military parade is a little sad. But I don’t think this cancellation is some sort of national tragedy,” said Volodymyr Sheredeha, 27, a veteran of the Donbas war.

To that end, Ukraine’s war veterans unions were organizing an informal parade called the “March of the Defenders”on Saturday for veterans and families of the fallen.

Alexander Levitskyi, a 54-year-old veteran, said he was going to march in Saturday’s unofficial parade “to honor those who gave their life to our motherland.”

In the early months of the war in the summer of 2014, with Ukraine’s regular army on its heels, everyday Ukrainians filled the ranks of irregular, civilian combat units. They headed out to the country’s east, where they faced Russian tanks, artillery, and the Kremlin’s regular troops.

Many of these volunteer soldiers had little or no formal military training before going into combat.

At the same time, legions of Ukrainian volunteers collected and delivered supplies to support the front-line troops—often at great risk. It was a grassroots war effort, underscoring a widespread attitude of self-reliance among Ukrainian citizens who were unwilling to wait for the government to act in a moment of crisis.

When Ukraine’s troops had the upper hand in the summer of 2014, Russian regulars outright invaded, fighting to a draw that fixed the war along its current contact line.

Ultimately, the volunteer movement that year did more than save Ukraine from a military disaster. It also paved the way for the country’s democratic civil society to flourish in a way it never had prior to the war.

The war also has hardened Ukrainian society, reinforcing a collective commitment to democracy as well as a top-to-bottom cultural, political, and economic divorce from Russia.

According to Ukraine’s national security doctrine, Russia is officially listed as the “aggressor nation.” A July poll by the Kyiv International Institute of Sociology found that 67% of Ukrainians agree with labeling Russia the “aggressor country.”

Still, many Ukrainians who took part in the revolution bristle at the slow pace of post-revolutionary reforms—particularly when it comes to battling corruption.

The war is partly to blame. Much of the protesters’ revolutionary zeal was siphoned into supporting an existential war effort rather than holding the post-revolutionary government to account.

But some Ukrainians say things are slowly changing for the better, despite the war.

“I think that life in Ukraine is changing very slowly,” said Sheredeha, the 27-year-old veteran. “I’m satisfied with Ukraine’s current choice of geopolitical direction—but this movement could be much faster.”

The “decentralization” laws of 2015 divested some budgetary power from the central government. Consequently, many local governments have greater control over their own spending, spurring officials to green-light long overdue community improvement projects.

After decentralization, the town of Horishni Plavni has practically transformed. New sidewalks and parks have sprung up around the town of about 52,000 located on the Dnieper River south of Kyiv.

Roads have been improved—flat, smooth asphalt now covers many places previously pockmarked with potholes. Roundabouts have replaced old four-way intersections. Cherry blossoms have been planted along a main street and in a park. New streetlights finally have gone up, illuminating roads that long had been dangerously dark at night.

“I’ve seen more positive changes in the past few years than in all the years since independence,” said Valeriy Deriy, 54, who lives in Horishni Plavni.

Across Ukraine, all the statues of Vladimir Lenin have come down. According to the “decommunization” laws of 2015—enacted to thwart Russia’s historic influence—Soviet names of cities, towns, or villages have been replaced with Ukrainian ones. Same goes for streets and parks, too.

According to an August poll by the Ukrainian think tank Rating, 83% of Ukrainians consider themselves to be “patriots.” The mood in Ukraine today, while not naively optimistic by any stretch, still stands in stark contrast against the increasingly contentious mood in Russia.

On one side, a smiling, charismatic Zelenskyy claps hands with supporters, like an NFL player taking the field. On the other, a stolid Putin struts toward a waiting motorcade in his customary “gunslinger’s gait.”

And Yet, the War

Meanwhile, the war goes on and on. The artillery thunders daily in the Donbas. Tracers light the night sky. Soldiers and civilians are still dying.

In many quarters, hopes are dim that peace can be achieved any time soon.

“In our understanding, peace is only possible if the Ukrainian territories occupied by Russia are returned. Until these territories are returned, ceasefire agreements will keep being broken,” Ukrainian political analyst Oleksandr Doniy wrote in an Aug. 8 opinion piece for the Ukrainian news site UNIAN. “All these long-term negotiations and periodic ‘ceasefire agreements’ are just illusions and attempts to appease the public, giving people some bits of hope.”

The war is always teetering on the verge of becoming much worse, far deadlier, and more destructive. After Russian warships escalated harassment of Ukrainian merchant vessels, a naval confrontation at the Kerch Strait in November nearly sparked an out-of-control escalatory domino chain.

The danger: Moscow has deployed about 80,000 soldiers, bolstered by tanks and mobile artillery, on Ukraine’s borders. Those forces are capable of mobilizing to launch a short-notice invasion, Western researchers say.

Ukraine weaves through crisis after crisis with Russia, each of which could offer the Kremlin the pretense for a manufactured crisis necessary to justify a major escalation of the ongoing war in the Donbas.

Many Ukrainian officials fear the Kremlin is, in fact, searching for a reason to ratchet up tensions, possibly even through military action, as a way to distract the Russian people from their domestic woes, which have slowly chipped away at Putin’s approval ratings.

Some in the West, too, fear that with Putin increasingly under pressure from slipping poll numbers and protests, he may choose to dial up the war in Ukraine.

The war remains a top concern for many Ukrainians. In a poll last year prior to Zelenskyy’s election by Rating, 67% of Ukrainians said ending the war should be the next president’s priority.

Reflecting his perceived mandate to end the war, Zelenskyy has made inroads at striking up peace talks with Putin. The Kremlin confirmed Friday that preparations were underway for talks between the two leaders.

According to Ukrainian and Russian news reports, the two sides are nudging toward a prisoner exchange deal, offering a rare glimmer of hope after more than five years of war that peace may be possible at last.

“Let me do my job—I promised the people of Ukraine that we will return our prisoners, return our sailors, we will end the war,” Zelenskyy said Friday.