‘I Hope You Suffered’: Voices on Left Celebrate Philanthropist’s Death 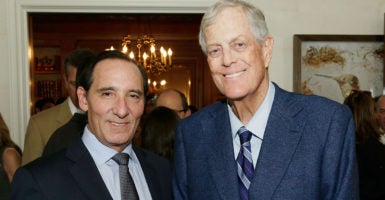 Philanthropist David Koch, right, with film producer Daniel Crown during a U.S. Olympic and Paralympic Foundation event hosted by Crown and his wife on May 17, 2017, in New York City. (Photo: Lars Niki/Getty Images)

Some on the left celebrated the news Friday of billionaire David Koch’s death after a battle with prostate cancer.

The libertarian philanthropist and political activist had contributed over $1.3 billion to public policy institutes, medical organizations, cultural institutions, and more. He was 79.

Those on the left expressing happiness over Koch’s passing included American sportswriter Charles Pierce, who suggested his corpse be dropped “into the Amazon rainforest fires,” and Rob Sheridan, an American graphic designer and photographer, who tweeted that he hoped Koch “suffered” as he died.

“Anyone who worked with David surely experienced his giant personality and passion for life,” Charles Koch said. “David’s philanthropic dedication to education, the arts and cancer research will have a lasting impact on innumerable lives—and that we will cherish forever.”

Kevin Gosztola, Shadowproof managing editor, tweeted that the Koch family should “drop his body out of luxury jet into blazing Amazon rainforest in Brazil.”

Frederick Joseph, writer and founder of We Have Stories, tweeted that Koch was “pure evil” and added that “the world is a better place with him gone.” Joseph also wrote the death was cause for a “celebration.”

“But imagine the turn up when orange satan is taken back to hell,” Joseph said in another tweet, likely referring to President Donald Trump.

British political journalist Mehdi Hasan mentioned David Koch’s beliefs on climate change and suggested headlines on his death should refer to the billionaire as a “climate denier.”

Hasan added that “his long-term legacy” will be “funding the effort to downplay an existential threat to all of us.”

Conservative commentator Ben Shapiro called out the “glee” over Koch’s death and wrote on Twitter that it shows “how poisonous our politics have become.”

“The glee over the death of David Koch—a serious philanthropist with libertarian political views—is a perfect example of how poisonous our politics have become,” Shapiro wrote.

“Koch was pro-same sex marriage and he wasn’t pro-life,” he wrote. “Even that isn’t enough to appease the ghouls who see any support of Republicans as a symptom of grave inhumanity.”