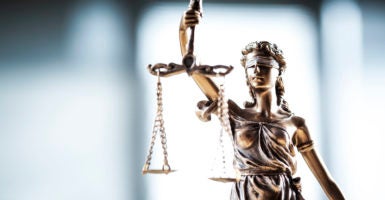 In a 6th U.S. Circuit Court of Appeals case, prosecutors charge the defendants with bank fraud, even though they didn’t commit bank fraud. (Photo: seb_ra/Getty Images)

In an opinion issued on Aug. 5, the 6th U.S. Circuit Court of Appeals struck a small but valuable blow against prosecutorial overreach and the problem of overcriminalization.

By now, overcriminalization—the overuse and abuse of criminal laws to address every societal concern and punish every mistake—is a familiar problem.

There are hundreds of thousands of federal crimes, creating a minefield of criminal liability that Americans unknowingly walk through every day.

The federal criminal code and the hundreds of thousands of criminal statutes contained in federal regulations criminalize things such as making an annoying noise in a national park, allowing a horse to exceed a “slow walk” when people nearby are on foot, and using a surfboard on a beach designated for swimming.

No less serious than the problem of criminalizing all sorts of innocent behavior is the problem posed by overzealous prosecutors who stretch the law to obtain as many criminal convictions as possible.

As The Heritage Foundation’s Paul Larkin writes, overzealous prosecutors “might not acknowledge or even recognize instances of overcriminalization, and even if they did, they might not highlight them, because doing so would embarrass the attorney general and individual U.S. attorneys who had the authority to prevent any such prosecutions.”

In the 6th Circuit case, prosecutors charged the defendants with bank fraud, even though they didn’t commit bank fraud. The defendants did commit mortgage fraud, but the government didn’t prosecute them for that.

In fact, for reasons unknown, the prosecutors ignored that crime for five years until the statute of limitations expired.

Then, realizing that their delay cost them a mortgage fraud conviction, the prosecutors searched the criminal code for some law that might let them prosecute the defendants anyway. They settled on bank fraud, even though the defendants’ crime didn’t fit the bill.

But the court refused to expand the law because the bank fraud statute “is as straightforward as they come” and plainly did not cover mortgage fraud. It ordered that the defendants be acquitted.

That was the right outcome.

You might counter, “The defendants were guilty of something. Surely they should go to jail, regardless of the prosecutors’ mistake.” But that flips due process on its head, allowing the government to lock people up whenever—and for whatever—it wants.

Prosecutors already have tremendous power, and the fewer tethers it has, the more unjust its use becomes.

Consider the case of Eddie Leroy Anderson and his son.

Prosecutors charged them with federal felonies for looking for arrowheads on federal land. Although they found no arrowheads, prosecutors argued that the mere act of looking for them was an attempt to violate an obscure law that the father and son didn’t know existed.

In another case, prosecutors charged a fisherman with destruction of “tangible objects” in violation of a law designed to prevent financial companies from destroying records of fraudulent activities.

The Supreme Court reversed the fisherman’s conviction and held that although fish are, strictly speaking, tangible objects, prosecuting the fisherman for throwing fish back into the sea was an impermissible expansion of a law designed to target financial crimes.

In each of these cases, prosecutors zealously sought a conviction, but never stopped to ask if they were doing justice.

The 6th Circuit deserves praise for overturning the convictions of Amir Babak Banyan and Bryan Puckett in Tennessee.

In so doing, the court reminded the prosecutors that liberty is best protected by interpreting criminal statutes narrowly and putting the burden squarely on the government to apply the right laws to the right crimes.

Prosecutors would do well to remember U.S. Supreme Court Justice George Sutherland’s admonition in a 1935 ruling that although a prosecutor “may strike hard blows, he is not at liberty to strike foul ones.”