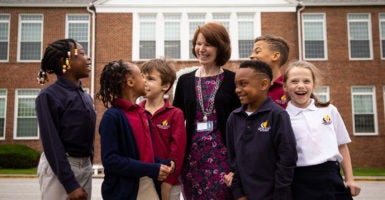 Some students no longer can afford to attend a Christian school in Maryland after the state cut it from a voucher program, claiming the school discriminates against LGBT individuals. Pictured: Bethel Christian Academy Principal Claire Dant with students in front of the school. (Photo: Alliance Defending Freedom)

When the state of Maryland found out that Bethel Christian Academy affirms the biblical view of marriage in its student handbook, officials last fall cut the Baltimore-area school from a state-sponsored school voucher program, arguing it practiced sexual discrimination.

Now the principal says at least six students no longer can afford to attend Bethel, a K-12 school in Savage, Maryland.

And in an effort to live up to its own standard, Bethel is taking its case to court, claiming religious discrimination by the state.

Bethel Principal Claire Dant told The Daily Signal in a phone interview that in addition to the six students who were unable to attend Bethel this past school year, others likely were interested in enrolling but didn’t after finding out they couldn’t use a voucher to cover tuition costs.

Bethel sent a copy of the “discriminatory” handbook passage to The Daily Signal. It reads:

Bethel Christian Academy admits students of any race, color, and national or ethnic origin to all the rights, privileges, programs, and activities generally accorded or made available to students at the school. It does not discriminate on the basis of race, color, national, and ethnic origin in administration of its educational policies, admissions policies, scholarship, and loan programs, and athletic and other school-administered programs.

It should be noted, however, that Bethel Christian Academy supports the biblical view of marriage defined as a covenant between one man and one woman, and that God immutably bestows gender upon each person at birth as male or female to reflect His image.  (Gen. 1:27, Gen. 2:23-24) Therefore, faculty, staff, and student conduct is expected to align with this view. Faculty, staff, and students are required to identify with, dress in accordance with, and use the facilities associated with their biological gender.

Maryland is one of 14 states that provide a school choice program for K-12 students in which funds go to eligible students in the form of a voucher that can be put toward the family’s school of choice. Maryland students can receive up to $4,400 each school year to use toward tuition.

Bethel has been a part of the voucher program known as Broadening Options and Opportunities for Students Today, or BOOST, for two school years, Dant said, and has received approximately $102,000 in total aid from the state.

Bethel complied with all the requirements of the voucher program, she said.

Since the state disagrees, in addition to removing Bethel from the voucher program, Maryland also is demanding that the school repay $100,000 of the funding.

Alliance Defending Freedom, an Arizona-based legal nonprofit that specializes in religious liberty cases, took up Bethel’s case in late June and is suing Maryland for targeting the school’s religious values.

“What Maryland has done in kicking out Bethel from the [school voucher] program with no reason is truly hostile to Bethel’s position on sexuality,” Christiana Holcomb, legal counsel representing the school, told The Daily Signal in a phone interview.

State law says Maryland cannot require a religious entity to change its policy or change its beliefs. But, Holcomb said, that is essentially what the state is insisting Bethel do in order to participate in the voucher program.

“It’s sad that a government is so hostile to traditional marriage that it is willing to harm students in the process,” Holcomb said.

No School Choice Without Religious Choice

Lindsey Burke, director of the Center for Education Policy at The Heritage Foundation, told The Daily Signal in an email that “if private schools cannot operate according to their beliefs, we don’t have school choice any more.”

The state of Maryland does not require students to attend any particular school through the voucher program.

No student is forced to attend Bethel and accept its particular religious views, which Burke noted is the purpose of school choice.

“No child is assigned to a private school that holds beliefs with which they disagree,” Burke said. “Private schools are simply providing their services in exchange for tuition. Families can then choose to pay for the services they offer.”

Tip of the Iceberg

When Maryland cut Bethel from the program, it affected more than just tuition costs, Dant said.

The principal said the program is also tied to the non-public school textbook and technology program, which helps lower-income students afford the books and tools they need for school, and the Aging Schools grant program, which provides funding to older facilities for maintenance and upkeep.

“Our building is a historic building which requires upkeep,” Dant said. “That grant program was extremely valuable to us in upgrading windows and those sorts of things. The state tied both of those programs to the [Broadening Options and Opportunities for Students Today] program.“

“So we have also been denied that funding, and that was another tens of thousands of dollars,” she said.

Dant was careful to note, however, that the state’s actions will not sink the school financially.