EXCLUSIVE: Vermont Family Accuses School District of Retaliating Against Them for Pushing Back Against Biological Male in Girls’ Locker Room 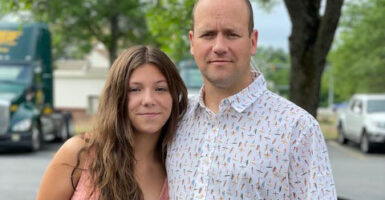 Travis Allen and his daughter Blake have faced repercussions from speaking out against a biological boy being in the girls' locker room at Blake's school. (Photo courtesy of the Allen family.)

A Vermont school district punished both 14-year-old Blake Allen and her father for stating that a biologically male student who identifies as a transgender girl is male. Now the Allens are suing the school district—and accusing it of retaliating against their family for speaking out.

Represented by the Alliance Defending Freedom, Travis and Jessica Allen alleged in a lawsuit filed Thursday in the United States District Court for the District of Vermont that Travis and Blake “were punished for expressing their view on a matter of profound public concern: whether a teenage male who identifies as female should be permitted to change in a girls’ locker room regardless of the discomfort experienced by the girls in that room.”

“In objecting to a male being in the room while the girls are changing, Travis and Blake each made comments underscoring that the trans-identifying student is in fact a male, including by using male pronouns,” said the lawsuit, which was first obtained by The Daily Signal. “Indeed, their view of the student’s maleness was foundational to their opinions on appropriate use of the locker room.”

“Yet, their remarks were too much for Defendants’ transgender orthodoxy—Travis was deemed to have ‘misgendered’ the student, while Blake was found guilty of ‘harassment’ and ‘bullying’—so Defendants disciplined both of them.”

Superintendent Layne Millington, co-principals Lisa Floyd and Caty Sutton, and the Orange Southwest School District Board are state actors and “violate the First Amendment” by attempting to dictate “what may be said on matters of public concern,” the lawsuit said, noting that these school district officials also cannot discriminate against speech on the basis of its viewpoint.

“Yet, that is exactly what happened here,” the filing states. “Defendants punished Travis and Blake for saying that a male is a male, as a matter of sex and biology, regardless of the gender identity that the male has assumed.”

The Daily Signal first reported that Travis Allen has been suspended without pay from his job as the Randolph Union Middle School girls soccer coach for calling the trans-identifying student a male. His suspension followed a Daily Signal video and report highlighting Blake’s discomfort at a biological male using her locker room while she was changing. Jessica Allen also spoke out in the video.

Several of Blake’s fellow female students who spoke with The Daily Signal shared they asked the student to leave, but said the student did not immediately do so. The girls said that the student stood in the corner and looked at them while they were changing, causing them to feel uncomfortable.

The trans-identifying student’s guardian told The Daily Signal that her child is a girl, belongs in girls’ spaces, and did not behave inappropriately.

“A male was in our locker room when volleyball girls were trying to get changed,” Blake said in the mid-October interview. “And after I asked him to leave, he didn’t, and later looked over at girls with their shirts off. And it made many people uncomfortable and feel violated. And I left as soon as I could in a panic.”

“It’s not fully the trans student’s fault,” she added. “It is much more the school board’s fault and they’re failing everyone. Not just the volleyball team, not the transgender student. They did nothing to help this situation. They still aren’t. They just want people to be in trouble and they’re not trying to help make a change.”

According to the lawsuit, the trans-identifying student repeatedly made remarks like “I am going to f—ing kill Blake Allen” and “I’m gonna f—ng kill somebody” after Blake spoke up about the matter.

School officials reportedly deemed the threats low-risk (The Daily Signal previously pressed the school on these alleged threats without direct response) and “no action as taken” against the student, according to the lawsuit.

Blake’s high school, Randolph Union High School, concluded its investigation into the incident in the locker room on Oct. 14, according to the lawsuit. She was not offered an opportunity to “present evidence or otherwise defend herself,” and the family was not informed of the school’s decision to suspend Blake until Oct. 21, according to the suit, though the school knew that Blake and the trans-identifying student would be playing in multiple volleyball games together.

In its Oct. 21 notification, the school reportedly told the Allens that Blake had violated its Harassment, Hazing, and Bullying policy and must serve a two-day out of school suspension, write an essay, and take part in a “restorative circle” with the school’s equity coordinator “and at least two students who can help her understand the rights of students to access public accommodations.”

If Blake’s required essay is found to be “lacking good faith” by the school, she would have to serve an additional three days’ out of school suspension, the lawsuit said.

“When he asked me to publicly apologize, I thought about it,” Travis Allen said earlier this month. “I did pause and waited a few seconds. And I’m thinking, ‘If I say that I’ll apologize, I’ll be able to coach my youngest daughter for the rest of the season, but I’m going to, in turn, hurt my other daughter, because I’m not standing up for what we believe in, I’m just cowing to them like so many other people have done. And I just can’t do that.’”

Allen also said in a previous interview with The Daily Signal that neither he nor his family were seeking attention through their actions, adding: “We’re a family that pretty much goes with the flow. And this time we just couldn’t do it.”

In a Thursday statement to The Daily Signal, Alliance Defending Freedom senior counsel Phil Sechler emphasized that “all Blake and Travis did, in discussing whether males should be in the girls’ locker room, is point out that a transgender student is in fact a male and it cost Travis his coaching position and got Blake suspended from school.”

“No one should lose their job or get suspended from school for voicing their opinion or calling a male a male—when one person is silenced for speaking freely, everyone’s rights are threatened,” Sechler said.

The Allens are not the only family in the Randolph, Vermont, community that has expressed frustration with the school district’s handling of the situation.

Multiple parents who spoke with The Daily Signal said that they are outraged that the school district and the high school would allow such an incident to even occur—they don’t want biological boys in their daughters’ locker rooms, and they are bewildered as to why the school system is apparently prioritizing the needs of students who identify as transgender over their daughters. They also strongly pushed back against allegations that speaking up is hateful.

“I feel it’s not the place for them,” said Eric Messier, the father of another volleyball player who spoke with The Daily Signal, referring to biological males using the girls’ locker room.

“All that matters is she’s uncomfortable. It’s pretty simple,” he added.

Blake previously shared with The Daily Signal that she does not regret speaking out.

“I’m glad I spoke out because there’s still so much that could be done, that the law could be changed, because now it’s national news,” she said, adding of the trans-identifying student, “He had the right to go in, but once we said we were uncomfortable, he should have just left. It should have been that simple.”

“I don’t want other girls to have to feel uncomfortable about it,” Blake added. “I think everyone should be able to just get changed in a locker room that they were born as. If you were born a girl, you can go in the girls’ locker room, get out when you’re done. It should be simple and it’s not anymore.”