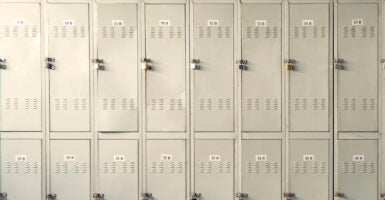 Two girls on the volleyball team told The Daily Signal that the trans-identifying student entered their locker room while they were changing and would not leave when asked. (Photo: Getty Images)

Melissa Sivvy said in a Monday afternoon phone interview with The Daily Signal that she is the child’s guardian and stepmother. “Her whole life, she’s identified as a girl,” Sivvy said. “She came out in eighth grade.”

The Daily Signal has chosen not to name this young person out of respect for the child’s youth (the student is 14 years old). Asked about the child’s background, Sivvy said she did not think further information about the child’s family life was pertinent to this story.

Sivvy responded to outrage from Randolph Union High School parents against the school and the Orange Southwest School District, in which students are allowed to use the locker room or bathroom that corresponds with the gender they identify with.

Two girls on the volleyball team told The Daily Signal that the trans-identifying student entered their locker room while they were changing and would not leave when asked. These girls said the incident made them incredibly uncomfortable, noting that the student is biologically male with male genitalia.

Asked to address the girls’ discomfort, Sivvy suggested the girls “ask themselves what it would feel like for them to have their bodies not match their brains,” if they “woke up one morning and had different anatomy.”

“What would that feel like for them?” she asked.

Parents who spoke with The Daily Signal said they do not want biological boys in their daughters’ locker rooms, and they are bewildered as to why the school system apparently prioritizes the needs of students who identify as transgender over the needs of their daughters.

Sivvy accused parents of “sexualizing their children to serve their own agenda,” insisting that her trans-identifying child is “trying to be a kid … just trying to be herself and have a good time,” a “girl like any other girl,” but born in the wrong body.

“My daughter is transgender,” she continued. “That has nothing to do with her sexual preferences or interests. She’s also only 14 years old. And that’s not where she’s at right now, she’s trying to be a kid, trying to play volleyball, just trying to be herself and have a good time. And parents of these children want to bring sex into it. And that’s also disturbing and further traumatizing because I don’t want my child to have to be forced to think about sex. That’s not where she’s at right now.“

The girls who spoke with The Daily Signal alleged that the student who identifies as transgender watched while they and their teammates were changing in the locker room. They also alleged that the biologically male trans-identifying student said, “My male instincts are kicking in,” referring to another female students’ breasts, and said of a female student who had spoken to a local outlet about the situation: “I’m going to f—ing kill someone,” before allegedly adding, “I f—ing hate” the female student.

“The things my child is being accused of is implausible at best,” Sivvy said in a Facebook message on Monday. “And this is the truth about why the locker rooms are closed to the team right now: to protect my child and her allies from being harassed any further.”

In response to this remark about the locker rooms, school superintendent Layne Millington told The Daily Signal that “the locker rooms were shut down to ensure student safety while the investigation is conducted, and the shutdown applies equally to the entire team.”

“RUHS administration tried to keep them open by finding adults who would be willing to personally supervise the locker rooms, but given the false and escalating rhetoric on social media, the adults were understandably reluctant to serve that duty—hence the only choice was to shut them down until the investigation is complete,” he added, noting that the school has multiple multi-stall and single occupancy restrooms and it is attempting to expand the number of “privacy stalls in the locker rooms.”

“Any claimed inconvenience to the players is minimal,” he added of the locker room closure.

Sivvy said that the volleyball team had been “acting as a team” and getting changed together in the locker room for several weeks before the initial locker room incident. She said that the girls began yelling at the trans-identifying student to go out, describing the scene as “very scary and traumatizing.”

“She went out to the gym and talked to the coach and she was crying and the coach said, ‘I heard what happened in there. I’m sorry. I don’t know what’s going on either. I’ll get to the bottom of this,’” Sivvy continued. She also said that she believes the coach reported incidents of alleged harassment against the trans-identifying student.

The school has reportedly told Sivvy that it is “devastated and horrified to know that this kind of bigotry is alive and well at their school and in their community,” she added.

“White privilege cis het girls are used to getting what they want and getting away with it,” the trans-identifying student’s guardian said in a Facebook message. “I certainly didn’t realize how much privilege I’ve been afforded in my life until the full extent of the bigotry in this town has made my child afraid for her life and reluctant to go to school every day now.”

Sivvy accused the girls and their parents who have spoken out on the matter of planting “terrible ideas about transgender youth in the minds of the local public.”

“The truth of the matter is, these kids were doing fine until some parents found out there is a girl on the team who was assumed male at birth and is in the process of correcting that mistake with the help of the UVM youth gender clinic,” she added, apparently referring to the University of Vermont Children’s Hospital’s Transgender Youth Program.

Sivvy said her family is “being persecuted for literally no reason” other than that “people don’t like the idea of a girl who doesn’t fit their narrow definition of what a girl is.”

“Fortunately, there has been just as much, if not more, support and love flooding in our doors, texts, and inboxes than the hatred,” Sivvy said. “But as we all know, hatred is often louder. But sadly, as I have been sitting here writing this, I just got a call from the school that I need to go get her because once again she can’t get through a school day without people getting in her face and taunting her. This is hell. My kid wanted to play a game and be in a school team. And now she’s getting bullied right out the door.”

“I encourage them to either retract or confess to making it up before this goes all the way to a court with a judge and jury,” she added. “Perjury doesn’t look good on a resumé.”