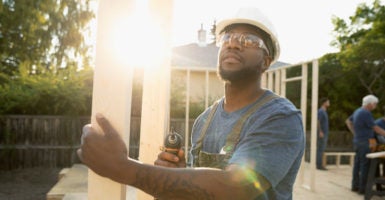 As the summer rolls on, the American economy is staying hot.

That’s the main takeaway from the Bureau of Labor Statistics’ reports on Friday, which shows that the economy added 164,000 jobs in July. That lined up for the most part with expert predictions. The economy is showing signs of resiliency economy due to sound policies like deregulation and tax cuts.

Nonetheless, it’s time to get real about the negative impacts that tariffs and out-of-control spending will have on long-term growth.

In July, we saw that the historically low unemployment rate went unchanged, hovering at 3.7%, while the labor force participation ticked up slightly from 62.9% to 63%, showing that Americans continue to be confident in the prospect of finding work.

One standout among the major worker groups is African Americans, whose unemployment rate of 6% is near a historic low.

According to my colleague Adam Michel at The Heritage Foundation, average wages have grown above 3% for 11 straight months—twice as fast as inflation. And since the passage of the tax cuts in 2017, wage growth for the poorest 25% of workers has reached its highest rate since the Great Recession.

In addition to this, The Wall Street Journal reports that wages are growing at a much faster rate than previously stated, with major jumps in employee compensation and disposable income.

Here’s where the new jobs came from:

This week, President Donald Trump vowed to add an additional 10% tariff on $300 billion of consumer goods from China (things you purchase at Walmart or Home Depot). That’s in addition to the existing 25% tariff on $250 billion in intermediate goods (things companies buy).

This move acts as a counter punch to consumers who are finally experiencing more take-home pay. Just as they have extra money in their pockets, they’re forced to spend more money on goods because of a trade war.

The tariffs are also creating uncertainty for business owners trying to plan for future growth. U.S.-China investment flows have now fallen to a five-year low, according to a recent report from the research firm Rhodium Group.

In addition, Congress and the president are piling massive new debt onto the American people, saddling future generations with uncertainty. The recently passed Bipartisan Budget Act of 2019 will bring back trillion-dollar deficits.

This is worse than spending under President Barack Obama. It’s not sustainable.

The good thing is that these policies can be reversed. With the stroke of a pen, the president can reverse his tariffs and free Americans from the burden of tax hikes, which is effectively what they are. We also can stop passing reckless deals that take us deeper into the black hole of debt.

The policies that brought us to this strong jobs market are proven to work, and they will continue to work as long as we don’t undermine them with trade wars and debt.