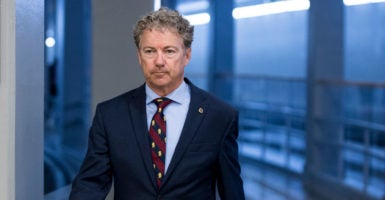 Some conservatives in Congress are denouncing a spending compromise between President Donald Trump and congressional Democrats “that increases spending by about $2 trillion over the next 10 years, but provides only $77 billion in offsets,” according to the chairman of the Republican Study Committee.

“While conservatives can appreciate the agreement’s restrictions on poison-pill riders, the price alone is far outside of what Congress should be allocating,” Rep. Mike Johnson, R-La., added in a statement.

The spending deal, which is expected to be voted on this week before Congress adjourns for its August recess, combines a temporary suspension of the debt limit through July 31, 2021, with raising the spending caps in the Budget Control Act for fiscal years 2020 and 2021—meaning the federal government would have no limit on how much it can borrow, as The Daily Signal previously reported.

“With more than $22 trillion in debt, we simply cannot afford deals like this one,” Johnson said. “I am disappointed Democrats denied the administration even modest concessions, and I will continue to make the case for restoring fiscal sanity in the Congress.”

The deal allocates $738 billion for military spending, which is less than the  $750 billion requested by Trump.

Rep. Mark Walker, R-N.C., a former chairman of the Republican Study Committee, also voiced his displeasure with the spending deal.

“The debt ceiling is here again,” Walker tweeted. “Our credit card is maxed out. What this budget deal does is ask the credit card company for another $320 billion in credit NOW for the chance to get paid back $75 billion in a decade. No bank would take that. American taxpayers shouldn’t either.”

“The president should be listening to [acting White House Chief of Staff] Mick Mulvaney and Russ Vought, and he should not be listening to Steven Mnuchin, period,” Roy said, appearing to suggest that he doesn’t trust Mnuchin to fight for conservative Republican budget priorities.

Roy added that “Senate Republicans will never not find a corner where they can go and hide,” implying that Republicans in the other chamber cannot be counted on to cut spending.

In May, Roy penned a letter, signed by more than 40 of his House GOP colleagues,  asking House Speaker Nancy Pelosi, D-Calif., to pursue only spending deals that adhere to the budget caps for fiscal years 2020 and 2021.

Conservative lawmakers in the Senate are also not happy about the so-called deal.

“The Trump economic boom gave us the best economy we’ve had in decades, and in any business, now would be the time to cut spending & save up for a rainy day,” freshman Sen. Mike Braun, R-Ind., tweeted.