Art of the Budget Deal: Trump, Pelosi Agree to Up Spending and Debt 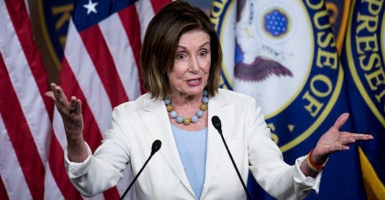 House Speaker Nancy Pelosi has been negotiating with Treasury Secretary Steven Mnuchin on a budget deal that the Trump administration and House Democrats could get behind. Pictured: Pelosi holds her weekly news conference in the Capitol on July 17. (Photo: Bill Clark/CQ Roll Call/Getty Images)

When President Donald Trump begrudgingly signed a budget deal he called “ridiculous” in order to get increases for the military budget, he asserted: “I’m not going to do it again.”

Now, the Trump administration and House Democrats reportedly have reached a deal to suspend the debt limit temporarily and increase spending by more than $300 billion with only limited cuts.

Around 5:45 p.m. in Washington, the president tweeted:

I am pleased to announce that a deal has been struck with Senate Majority Leader Mitch McConnell, Senate Minority Leader Chuck Schumer, Speaker of the House Nancy Pelosi, and House Minority Leader Kevin McCarthy – on a two-year Budget and Debt Ceiling, with no poison pills….

“This was a real compromise in order to give another big victory to our Great Military and Vets!” Trump added on Twitter.

“I think we’re doing pretty well on a budget,” Trump had told reporters earlier Monday in the Oval Office. “It’s very important we take care of our military. Our military was depleted and in the last two and a half years we’ve undepleted it, to put it mildly. We have made it stronger than ever before.”

Trump wanted a total of $750 billion for the military, but is getting $738 billion, nominally higher than Democrats’ counterproposal of $733 billion. It’s a $22 billion increase from the current fiscal year.

The two-year deal’s reported outline would also combine a temporary suspension of the debt limit through July 31, 2021, with raising the spending caps in the Budget Control Act for fiscal years 2020 and 2021. That means the federal government would have no limit on how much it can borrow.

Spending for federal agencies likely will be in the $310 billion to $320 billion range under the two-year deal. The Trump administration reportedly pushed for $150 billion in offsets for savings, but the settled figure could be closer to $77 billion—about one-quarter of new spending.

Lifting the caps on spending under the 2011 Budget Control Act would increase the national debt by more than $2 trillion for the next decade.

Treasury Secretary Steven Mnuchin has worked closely on the deal with House Speaker Nancy Pelosi, D-Calif. Congress is set to adjourn for the August recess, and many lawmakers are eager to enact a deal. The question was how much it would be offset by savings, as the Budget Control Act requires.

Congress has passed only three budgets since passage of the Budget Control Act, which allowed spending to increase by $440 billion above the 2011 caps over six years.

The largest came in March 2018, when Trump signed a budget bill that included $296 billion in new spending with only 13% offset by cuts. That deal is set to expire in October.

The negotiations are happening after the Congressional Budget Office released a report in June that said in 30 years, the national debt will consume 144% of the entire U.S. economy.

The debt will be larger than the economy in 15 years, the report said. Currently, debt held by the public is 78% of gross domestic product.

“We have $22 trillion in debt, trillion-dollar deficits each and every year,” Russ Vought, acting director of the Office of Management and Budget, told The Daily Signal last week.

“We projected all of those deficits in our budget when we unveiled it in February, so it’s a serious problem,” Vought said. “We think the president is taking it seriously. I think it’s just vital that we have a conversation about spending and deficits and what it takes to get our house back in order.”

Vought said both parties in Congress must step up to combat the out-of-control spending that causes the national debt:

We have a great deal of concern of where we are fiscally. It’s why the president has led in this area by putting forward historical spending reductions, but it is a bipartisan problem and we need a bipartisan solution. We need Congress to act on cutting spending. We need Congress to come alongside us and get serious about balancing the budget. It’s something the president has consistently been calling on Congress to act on since the early days of his administration.

During a White House press gaggle Monday, top White House adviser Kellyanne Conway didn’t comment on a news report that spending offsets would be only about half of what the administration asked for.

“I think he has made his spending priorities very obvious. We will always support more money for the military,” Conway said. “I can’t think who deserves more money more than our brave men and women in uniform.”

Conway said funding the Department of Homeland Security is also a high priority, noting that Rep. Alexandria Ocasio-Cortez, D-N.Y., called for shutting down the department, which includes immigration agencies.

“I know one of your favorites up there in New York City is maligning the great work of the great men and women in Customs and Border Protection, but I won’t allow them to do that and this president won’t allow them to be unfunded,” Conway told reporters. “To say you are going to abolish the entire Department of Homeland Security is as arrogant as it is ignorant.”

This report has been updated to reflect the president’s announcement of a budget deal.