4 Reasons the Left Is So Invested in the Census Debate 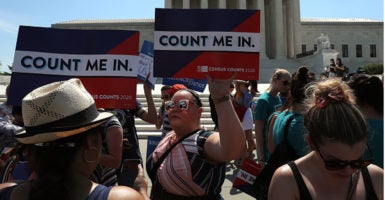 People gather in in front of the U.S. Supreme Court as decisions are handed down on June 27 in Washington. The high court blocked a citizenship question from being added to the 2020 census for now, and in another decision ruled that the Constitution does not bar partisan gerrymandering. (Photo: Mark Wilson/Getty Images)

President Donald Trump is signing an executive order directing every agency to assist in getting a reliable count of citizens and noncitizens in the United States.

The Department of Homeland Security, the Social Security Administration, and others agencies that have population data will be required to share with the Commerce Department to get an accurate count—after a setback by the Supreme Court last month.

Liberal activist groups have been vigorously opposing the Trump administration’s push to ask a citizenship question on the census.

“It will not stop us from collecting the needed information and I think in greater detail and more accurately,” Trump said in the Rose Garden beneath cloudy skies, flanked by Commerce Secretary Wilbur Ross and Attorney General William Barr.

Today I will be issuing an executive order to put this very plan into effect immediately. I am hereby ordering every department and agency in the federal government to provide the Department of Commerce with all requested records regarding the number of citizens and noncitizens in our country. We will use these vast government databases to gain a full, complete and accurate count of the noncitizen population.

Democrat-allied liberal groups accused Trump of promoting partisanship in the constitutionally mandated process for counting the American population. Other experts note there have apparently been ample politics to go around on the census.

The Supreme Court, in a 5-4 ruling on June 27, handed Trump a temporary loss, as an opinion by Chief Justice John Roberts scolded the administration for supposedly misleading the court about the political intent of including a citizenship question.

But Roberts seemed to leave open the possibility that the administration could return to the court with a different rationale.

A citizenship question was on the decennial census forms from 1820 to 1950. After that, it was only included on the long-form census form. In 2010, the question was removed entirely by the Obama administration.

The question remains on the American Community Survey, an annual population canvass that the Census Bureau conducts.

After early reports that Trump might sign an executive order, later reports indicated Trump would direct the Commerce Department to collect the data through other means.

Now with Trump’s announcement of the executive order, it appears there is no path forward for a citizenship question on the census.

That said, there are at least four reasons the left cares so much about the census.

The liberal Campaign Legal Center said in a post after the Supreme Court decision: “An addition of the Census question would have chilled minority participation in the 2020 Census and made it less accurate.

“For now, the quality of the census is protected from the hasty addition of a politically-motivated question.”

An amicus brief in the case, filed by a coalition of liberal groups—including People for the American Way, the Brennan Center for Justice, and the National Association of Latino Elected and Appointed Officials Educational Fund—sought to explain why the immigrant population broadly would be discouraged from filling out a census form.

However, the brief never made a distinction between legal and illegal immigrants.

“Amici and our constituencies have spent decades in the field, working with communities to ensure full participation in the census,” the liberal coalition’s amicus brief said. “Our experience and the findings of social scientists and other census experts all confirm that including the citizenship question will lead to depressed participation, particularly among families that include immigrants, young children, and people of color.”

The organization also didn’t explain why a legal resident might be discouraged from filling out a census form because of a citizenship question.

The immigration debate factors into the resistance to a citizenship question, Hans von Spakovsky, a senior legal fellow at The Heritage Foundation, said.

“We are in this vigorous debate about immigration policy in this country. I think the official estimates in the number of aliens who are in the country illegally are way low,” von Spakovsky said.

“I think the census numbers, if we could ask this question, which would give us an accurate read on exactly how many noncitizens there really are in the country. I think the number is going to be surprisingly larger than people think it is,” he said. “I don’t think the left wants people to know that.”

U.S. Citizenship and Immigration Services, an arm of the Department of Homeland Security, already knows how many noncitizens are in the country legally.

Unidos US, a Hispanic advocacy group formerly known as the National Council of La Raza, stressed the importance of the 2020 census, saying on its blog that many “Latinos currently live in hard-to-count Census tracts, and in 2010, the undercount for Latino children was twice that of White children—and this has led to reduced money and resources for our communities, schools, and neighborhoods.”

That same Unidos US blog post noted that, among other things, census data are used to “[d]etermine the number of congressional seats each state gets, and district lines that define state legislatures, city councils, and school boards.”

The census is a major part of the left’s overlapping strategy, said Hayden Ludwig, an investigative researcher at the Capital Research Center, a conservative think tank that investigates nonprofits.

“The census is one part of a trifecta to winning elections for Democrats,” Ludwig told The Daily Signal. “Voter turnout is another, but you have to know the right numbers to get them to turn out.”

The third component, he said, is redistricting. He pointed to Obama administration Attorney General Eric Holder’s group, the National Democratic Redistricting Committee, that seeks to reverse the Republican advantage in drawing state legislative and congressional districts that resulted from the 2010 GOP victories in most state legislative chambers.

“The most obvious first priority is to bump up the populations in blue states to get more Democratic districts and access more federal resources,” Ludwig said.

Political power has been a key motivator in seeking to prevent an accurate picture on the citizenship count.

“Reapportionment is based on total population. For example, California has probably five or six congressional seats it would not have but for the illegal alien population,” von Spakovsky said.

The amicus brief from the liberal groups also said:

The constitutionally mandated census is central not only to apportioning political power at every level of government, but also to shaping the annual allocation of more than $800 billion in federal funding, along with countless policy and investment decisions by government agencies, nonprofit organizations, and private enterprise.

After the Supreme Court decision on the citizenship question, Sam Berger, the vice president for democracy and government reform with the Center for American Progress, a liberal think tank, said, “The citizenship question would discourage millions of people from participating in the census and [compromise] federal funding for critical programs across the country.”

The aforementioned Unidos US blog post shows a chart of the top census-guided programs.

The first is Medicaid, which doles out $312 billion annually, followed by the Supplemental Nutrition Assistance Program (food stamps), which spends $69.5 billion a year; Medicare Part B, $64.2 billion; and highway planning and construction, $38.3 billion. Section 8 housing vouchers round out the top five at $19.1 billion.

“I also think they don’t want that information available because of federal-funding programs that depend on how many citizens a state has, and they don’t want federal funding reduced if people know how many noncitizens there are in a particular state,” von Spakovsky explained. “The overarching theme is the left does not want accurate data about the number of noncitizens in the country.”

Identity politics have also been part of the mix, Mike Gonzalez, a senior fellow for foreign policy at The Heritage Foundation, notes.

The Obama administration sought to use the census to create a new ethnic group—MENA, for people of Middle Eastern and North African derivation.

Gonzalez has written, “the government needs to get out of the unsavory business of conjuring up new pan-ethnic groups intended to divide us as a people and which have no basis in science, culture, ethnicity, or language.”

Ludwig, of the Capital Research Center, noted the irony in an aversion to asking someone whether he or she is a citizen, while at the same time asking someone about his or her race or ethnicity.

For example, he said, Japanese and Filipinos are in the same census category, even though their education and income levels are often very different.