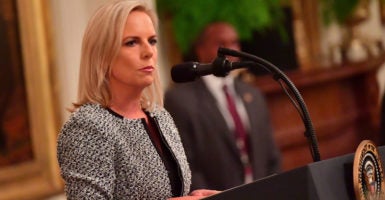 Secretary of Homeland Security Kirstjen Nielsen says, “Outdated laws prevent us from setting up the sophisticated defenses we need to protect big events, federal facilities, and other potential targets from an airborne menace.” (Photo: Kevin Dietsch/UPI/Newscom)

Arya Shatraw is a member of the Young Leaders Program at The Heritage Foundation.

Reps. Michael McCaul, R-Texas, and Steve Chabot, R-Ohio, recently wrote an op-ed for Fox News about legislation they have proposed to address the serious security concerns regarding the threat of hostile drones.

They warn that federal law enforcement does not have adequate authorities or capabilities to protect the general public and key government facilities from potentially hostile uses of drones.

The Department of Homeland Security and the Department of Justice, in particular, are in critical need of additional authorities and technologies to counter unmanned aerial systems, the congressmen wrote.

To be clear, drone technologies provide new opportunities and services such as better monitoring of weather and traffic for news programs, enhanced effects for entertainment, and even monitoring crop growth and supporting search and rescue efforts.

But with such technologies, new dangers have emerged. Terrorist groups such as the Islamic State have used drones to carry out attacks and conduct aerial surveillance. Criminals use drones to smuggle drugs across our borders and surveil law enforcement. Some even have attempted to use drones to try to smuggle illicit substances over jail and prison walls.

The McCaul-Chabot legislation—the Preventing Emerging Threats Act of 2018—is one of Congress’ attempts to address some of the problems with current law.

Secretary of Homeland Security Kirstjen Nielsen has described the measure as “a critical step in enabling the Department to address this threat” and said, “Outdated laws prevent us from setting up the sophisticated defenses we need to protect big events, federal facilities, and other potential targets from an airborne menace.”

The legislation provides the Department of Homeland Security and the Justice Department with the authority to act prudently when a drone poses a security risk, particularly to large-scale events and government facilities. The bill also considers the rights of drone users by placing reasonable limits on where data may be collected and the circumstances under which this data is held.

Capitol Hill sources say Congress may include elements of this legislation in the Federal Aviation Administration reauthorization legislation, which must be passed by Sept. 30. With the Senate also considering similar legislation, expect movement on this front in the coming days.

The U.S. needs to be better prepared for the threat of hostile drones. Congress should provide federal as well as state and local law enforcement the ability to protect Americans, and the McCaul-Chabot bill is a step toward doing just that.