This Republican Carbon Tax Proposal Is Anything but Conservative 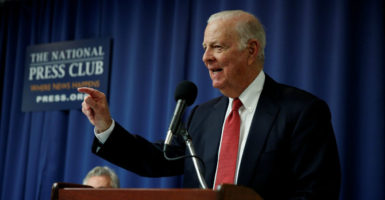 Tactfully so, it avoided the word “tax” in its title.

The plan calls for a gradually increasing tax on carbon dioxide emissions—a recommended $40 per ton of emissions to start—tacked onto the use of energy that Americans depend on most, such as gas, oil, and coal. The tax would target the beginning of the supply chain: “the mine, well or port.”

Those pushing the plan say the tax level would be set to reduce carbon dioxide emissions by more than what is accomplished by “current regulations”—presumably the Clean Power Plan.

In this ideal world, revenue from the tax would be reimbursed to Americans each quarter, with an estimate of $2,000 per family in the first year. This would be accompanied by repeal of the Clean Power Plan and other unnamed Environmental Protection Agency regulations on carbon dioxide emissions.

Finally, the harm to businesses would be mitigated by border tax adjustments for companies that export to or import from countries that do not tax carbon dioxide emissions

The goal? An “insurance policy” against “the risks associated with future warming [which] are too big and should be hedged.”

Advocates of this plan make the outrageous claim that such a carbon tax would help working-class Americans, strengthen the economy, shrink the size of government, stabilize geopolitics, and unify Republicans.

Hopefully, this is yet another carbon tax plan masquerading as “conservative” policy to be dead on arrival.

Eighty-two percent of the energy Americans consume comes from conventional fuels, the kinds that would be taxed under this plan.

America’s economy—from electricity and fuel to food, products, and services—depends on conventional energy, and when prices go up, the effects ripple throughout the entire economy.

Tax increases harm economic growth and opportunity by absorbing resources people have that could otherwise be used to create jobs, save, and invest. A carbon tax is particularly destructive as it directly targets the use of energy, a critical input to nearly every good, service, and activity.

Taxes at the “mine, well or port” just mean the increased costs of doing business will be passed down to customers.

The plan also has the added benefit, if you love big government, of hiding the tax in small increments along the supply chain so that people can never really tell how much the tax is.

This tax shell game allows the big spenders in Washington to more easily raise taxes without anyone noticing too much. Think about the turtle in the kettle that gets ever so slightly warmer over time. At first, just a nice relaxing bath—then, turtle soup.

A carbon tax would add an unnecessary cost that would be passed on to consumers, no matter how creative Congress can be in mitigating the effects with compensation caveats. Americans don’t want to pay more for energy.

The Heritage Foundation modeled a very similar plan to the one proposed by the Climate Leadership Council, using the same model employed by the U.S. Energy Information Administration.

Heritage looked at the economic impact of a $36 per ton carbon tax that increases according to the EPA’s estimates for the social cost of carbon. Heritage analysts assumed a 100 percent return of revenues back to taxpayers—a mighty assumption, but one the Climate Leadership Council makes.

The result is not the rosy picture painted by the Climate Leadership Council. By 2035, Americans will face:

Those hit hardest are low-income Americans (despite the 100 percent rebate) and industries like manufacturing.

The clincher, though, is a carbon tax will not accomplish the environmental benefits that are the entire purpose of this exercise—regardless of what one believes about global warming.

Former EPA Administrators Lisa Jackson and Gina McCarthy have admitted as much. Former Secretary of State John Kerry agreed while at the Paris climate agreements in 2015.

Further, the EPA can provide no health benefits from the Clean Power Plan, let alone an estimate of how much warming is avoided. “

To add to the irony, a carbon tax would choke economic opportunity—the best means people have to adapt and protect themselves.

Meanwhile, China, India, and others will be building power plants to provide reliable and inexpensive energy to more people, including millions who do not yet have access to electricity, in efforts to lift their people out of poverty into better, healthier standards of living.

Since when is it an “enduring conservative conviction” to create problems when trying to solve problems—and in this case a perceived problem that isn’t well defined?

Some things just do not go together. Conservatives and a carbon tax is one.