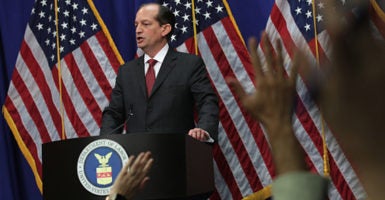 Secretary of Labor Alex Acosta speaks at a press conference July 10 at the Labor Department in Washington. Acosta discussed his role in the 2008 prosecution of sex offender Jeffrey Epstein. (Photo: Alex Wong/Getty Images)

Fending off calls for his resignation or firing, Labor Secretary Alex Acosta on Wednesday defended his role as a federal prosecutor in Florida more than a decade ago in what is widely viewed as a plea deal with billionaire sex offender Jeffrey Epstein that resulted in a lenient sentence.

He said a federal trial would have been “a roll of the dice,” with no guarantee of a more severe punishment, and put most of the blame on the Palm Beach County State Attorney’s Office.

“The goal here was straightforward: Put Epstein behind bars, ensure he registered as a sexual offender, provide victims with the means to seek restitution, and protect the public by putting them on notice that a sexual predator was in their midst,” Acosta said at a press conference Wednesday.

Acosta was the U.S. attorney for the Southern District of Florida in 2008, when the plea agreement was reached.

On Monday, federal prosecutors in the Southern District of New York charged Epstein, 66, with the sex trafficking of dozens of young girls, some as young as 14 years old.

During Wednesday’s nearly hourlong press conference, Acosta dodged questions as to whether he would apologize to the victims for the handling of the case.

Rather, Acosta expressed sympathy for the victims and called for them to come forward. He defended the actions of federal career prosecutors in his office at the time, but he ridiculed the actions of state prosecutors who he said made an “absolutely awful” deal with Epstein that required federal intervention.

“It was complicated by the fact that this matter started as a state investigation. A state grand jury brought a single, completely unacceptable charge,” he said. “A state official allowed Epstein to self-surrender. It is unusual for a federal prosecutor to intervene in a state matter.”

Acosta stressed that times have changed, expressing the view that it’s difficult to judge the circumstances and facts of a case from the past through today’s lens.

“Today, we know a lot more about how victim trauma impacts their testimony. And this, too, is important,” Acosta said. “Our juries are more accepting of contradictory statements, understanding that trauma-impacted memories work differently. And today, judges do not allow victim-shaming by defense attorneys.”

In 2008, Epstein reached a deal with federal prosecutors in the Southern District of Florida, run by Acosta at the time, that allowed the financier to avoid federal prosecution in a case involving multiple charges of sexual abuse, in exchange for pleading guilty in a Florida state court to charges of procuring a minor for prostitution and felony solicitation.

He was placed on the sex offender registry and served just 13 months in county jail, despite an agreement on an 18-month sentence. Epstein was allowed to leave the lockup daily for work-release.

Some of Epstein’s victims have come forward to say prosecutors didn’t listen to them.

Acosta added, “If there are other states that can bring state charges, they should consider those as well. So, I absolutely welcome this New York prosecution.”

He added that Epstein is “a bad man and needs to be put away.”

Meanwhile, Democrats in Congress have called for Acosta to resign as secretary of labor or be fired by the president.

Reporters asked Acosta about his future at the Labor Department, amid reports and rumors that acting White House chief of staff Mick Mulvaney wants him out.

“I keep reading articles about me and Mr. Mulvaney,” Acosta said. “He called me this morning to say, if asked, that our relationship is excellent, too, and that any articles to the contrary are, in his words, ‘B.S.’”

Speaking in the Oval Office on Tuesday, Trump defended Acosta.

“He has been a great, really great secretary of labor,” the president said.  “The rest of it, we’ll have to look at. We’ll have to look at it very carefully. You’re talking about a long time ago. It was a decision made, I think, not by him, but by a lot of people.”

The secretary said his relationship with President Donald Trump is “outstanding,” but acknowledged it’s up to the president whether he remains in the Cabinet.

“If at some point the president decides that I am not the best person to do this job, I respect that,” Acosta said. “That is his choice. I serve at the pleasure of the president.”