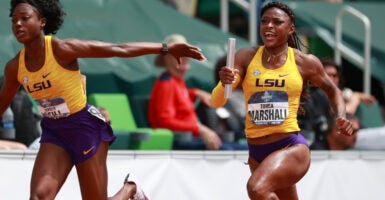 Louisiana legislators fell heartbreakingly short of protecting girls and women in sports on Wednesday. In a 68-to-30 vote, the Louisiana House of Representatives narrowly missed the 70 votes needed to override Democrat Gov. John Bel Edwards’ veto of the Fairness in Women’s Sports Act, which would have protected female athletes from being forced to compete with biological males.

Authored by state Sen. Beth Mizell, the bill requires that all elementary, secondary, and post-secondary schools:

… [D]esignate intercollegiate, interscholastic, or intramural athletic teams according to the biological sex of the team members; … provide that teams designated for females are not open to participation by biological males; [and] provide immunity protections for schools from certain adverse actions.

With this protective measure vetoed, the future for female athletes in Louisiana is uncertain.

While the Republican-controlled state Senate successfully overturned Edwards’ veto before it advanced to the House, the margin of victory was narrow. The Senate’s 26-to-12 party-line vote represented the precise number needed for a two-thirds majority to go to the House.

Edwards called the bill discriminatory and a “solution in search of a problem.” He also said the National Collegiate Athletic Association and various athletic championships, including the Final Four, would likely not occur in Louisiana because of this bill.

This legislation will make life more difficult for children who are going through unique challenges gaining acceptance into their schools, communities, and sometimes even their own families. …

[T]he effect of this bill is not so much about how it would affect athletic events, … [but] the real harm of this bill is that it would set as the policy of the State of Louisiana that there is something wrong with these children and that they should be treated differently from whom they really are.

Edwards did not mention the documented physiological advantages biological males have over females in athletic competitions. He also did not elaborate upon how this bill would target children.

Legislators anticipated Edwards’ veto because he is the Deep South’s only Democratic governor. He broke with governors of other Southern states, including Alabama, Arkansas, Mississippi, Tennessee, and Florida, that have enacted their own bills protecting women’s sports.

Women’s sports bills have been introduced in 31 states across the country, and rely on a traditional, sex-segregated athletics model, taking their cue from Title IX of the Education Amendments of 1972—a law motivated by the need to provide equity for females in all educational formats, and which requires equal athletic opportunities for both males and females in schools receiving federal funding.

The flurry of similar legislation across the country has been prompted by the Department of Education’s expansive interpretation of Title IX to include “gender identity” within the statute’s prohibition on sex discrimination.

Bostock was an employment discrimination case that expanded the definition of discrimination on the basis of “sex” under Title VII of the 1964 Civil Rights Act to include discrimination-based sexual orientation and gender identity as well.

That case has complicated the application of state and federal anti-discrimination laws and created a patchwork of solutions to ensure protection of all Americans’ civil rights, even as the left moves aggressively to elevate the rights of transgender individuals over biological females and those with religious objections to the new “woke” sexual orthodoxy.

Until or unless the Supreme Court hears a challenge to a state law protecting women’s sports or one based on the federal government’s reinterpretation and application of Title IX spawned by last year’s Bostock decision, women’s right to fair play in Louisiana, at least for the time being, remains on the bench.