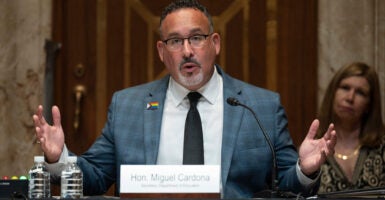 During his Senate committee confirmation hearing in February, Education Secretary Miguel Cardona affirmed his support for transgender athletes during a line of direct and intensive questioning by Sen. Rand Paul, R-Ky.

Cardona stated, “I think that it’s critically important to have education systems and educators respect the rights of all students, including students who are transgender, and that they are afforded the opportunities that every other student has to participate in extracurricular activities.”

Cardona on Wednesday cemented his department’s formal position on the matter, indicating that the U.S. Supreme Court’s Bostock v. Clayton County opinion extending workplace discrimination protections under Title VII of the Civil Rights Act to gay and transgender employees would likewise be applied by the Department of Education to gay and transgender students under Title IX of the Education Amendments of 1972.

“We just want to double down on our expectations,” Cardona said. “Students cannot be discriminated against because of their sexual orientation or their gender identity.”

On Day One of his administration, President Joe Biden’s executive order on sexual orientation and gender identity discrimination had muddied the waters on Title IX, and a coalition of left- and right-leaning women strenuously urged the Department of Education to clarify precisely what it would do to ensure that the interests of biological women were protected within an educational context, fully aware that Title IX was on the line.

On Feb. 11, the Department of Housing and Urban Development announced it would be requiring entities covered by the Fair Housing Act to not “discriminate” based on sexual orientation or gender identity. The action gave rise to the School of the Ozarks d/b/a College of the Ozarks v. Biden, a lawsuit challenging the directive for forcing the religious school to violate its beliefs by opening its dormitories, dorm rooms, and shared shower spaces to members of the opposite sex.

On May 10, the Department of Health and Human Services announced it would be enforcing Section 1557 of the Affordable Care Act to include nondiscrimination on the basis of sexual orientation and gender identity.

But the impact on Title IX’s application and enforcement remained unclear until Wednesday.

Though Bostock has been cited endlessly for the proposition that the decision demands all civil rights law be altered to reflect sexual orientation and transgender status as stand-ins for sex, Justice Neil Gorsuch began his opinion for the court in that case as follows: “We proceed on the assumption that ‘sex’ signified what the employers suggest, referring only to biological distinctions between male and female.”

Title IX requires sexual equality for women, specifically because of their biological distinctions. As I’ve previously written, Title VII of the Civil Rights Act—the law at issue in Bostock—is sex-prohibitive, which is to say, it’s clear about biological sex being irrelevant to employment matters. By contrast, Title IX of the Education Amendments is sex-permissive, which is to say, it’s clear about consideration of biological sex as a relevant and supporting rationale for both the law’s application and its enforcement.

Previous Department of Education guidance issued by the Office for Civil Rights had indicated that while Bostock would possibly have salience in relation to sexual orientation (noting that as with Bostock, the point of emphasis was still biological sex, and it therefore demanded the same “nondiscriminatory” outcome), it ought not to guide interpretations of Title IX in relation to transgender students, as by definition, transgender students identified with a gender other than with their biological sex.

The opposition of biological sex to gender identity would gut Title IX’s very purpose; namely, to ensure that girls and young women have equal opportunities in education, including sports, bathrooms, and other areas of privacy.

In the 2nd U.S. Circuit Court of Appeals, four female athletes continue to battle on. They seek to cabin the Bostock decision and are requesting judicial clarification on whether they must be forced to compete against biological males who “identify” as female under federal law.

Helpful to their mission is Gorsuch’s clarifying language in Bostock, in which he anticipated hypotheticals like the one presented by Cardona on Wednesday:

Under Title VII, too, we do not purport to address bathrooms, locker rooms, or anything else of the kind. The only question before us is whether an employer who fires someone simply for being homosexual or transgender has discharged or otherwise discriminated against that individual ‘because of such individual’s sex.’?

Gorsuch’s opinion left the door open to an endless string of questions. Among them: What about religious schools, such as the College of the Ozarks, that refuse to open their sex-separated facilities to members of the opposite sex? What about the states that have passed laws protecting women’s sports, or the public schools that simply refuse to kowtow to the prevailing woke sexual orthodoxy?

For now, the Education Department has decided that sex-separated spaces, protected by law for decades under Title IX, ought to be sex-neutral, and has opened up single-sex bathrooms, locker rooms, showers, sports, overnight accommodations, and more at every institution receiving federal money to not just girls and women, but also to those who feel like girls and women. And the department will need to sniff out any perceived violation and pursue them one by one.

In the end, it may need to defend its cavalier edict on Title IX at the Supreme Court.