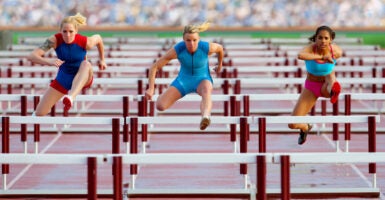 Female track and field runners like these are at a competitive disadvantage when biological males who "identify" as female are allowed to compete against them. But the ACLU is apparently OK with that. (Photo: Pete Saloutos/Getty Images)

Nearly as fast as the governors of West Virginia and Idaho could sign laws that protect the interests of biological women in interscholastic athletics, the American Civil Liberties Union set out to invalidate them.

The ACLU claims that preventing biological males who “identify” as female from competing in girls sports is not truly about sports, but rather “about erasing and excluding trans people from participation in all aspects of public life.”

As so many other left-wing groups have, the ACLU has relied heavily on last year’s watershed Bostock v. Clayton County decision from the Supreme Court as providing the legal foundation to invalidate all attempts to secure Title IX’s protections for young women at the state level.

That reliance is misplaced, and their lawsuits should fail.

In Bostock, the Supreme Court expanded “sex discrimination” within the scope of employment discrimination under Title VII of the Civil Rights Act of 1964 to include discrimination on the basis of sexual orientation and transgender status.

The ruling set off a flurry of executive orders from the Biden administration, and had left-wing activists around the nation calling for whole-cloth modification of all federal laws where “sex discrimination” might be expanded to include sexual orientation and gender identity.

Meanwhile, a Democrat-controlled Congress has reinvigorated its push to pass the Equality Act, which would accomplish by federal statute what the president has directed through executive fiat.

However, in his opinion for the Bostock majority, Justice Neil Gorsuch began: “We proceed on the assumption that ‘sex’ signified what the employers suggest, referring only to biological distinctions between male and female.”

That often overlooked, but critical, distinction is rarely a source of interest on the left. Biology was—at least prior to Bostock, and remains—the fulcrum upon which all “sex discrimination” distinctions in civil rights law turn.

Instead, pundits skip straight to Bostock’s second-step analysis, where Gorsuch noted, “An individual’s homosexuality or transgender status is not relevant to employment decisions. That’s because it is impossible to discriminate against a person for being homosexual or transgender without discriminating against that individual based on sex.”

Regardless of Gorsuch’s dubious “textualist” interpretation of federal anti-discrimination law, his opinion made clear:

The court’s Bostock opinion supports the proposition that relying at least in part on an individual’s biological sex (as with the case of sexual orientation or transgender status) is prohibited within an employment setting. Title VII makes clear sex is irrelevant to employment decisions.

But Title IX—the model for state legislation around the country designed to protect biological women within scholastic sports—differs significantly in its text, purpose, operation, and in certain applications from Title VII.

While Title VII is “sex-prohibitive,” Title IX is “sex-affirmative,” and requires consideration of a student’s biological sex.

During the waning days of the so-called sexual revolution, women and girls were still at an educational disadvantage when compared to their male peers. Title IX filled the gaps left by Titles VI and VII of the 1964 Civil Rights Act, and was enacted to address the vast disparities women and girls experienced in relation to boys and men in all aspects of learning, from facilities to sports and beyond.

Title IX has successfully changed the lives of girls and young women in America by broadening their educational horizons, which in turn has set them up for career success in later life.

In high school athletics alone, the rate of girls’ participation in 2016 was more than 10 times what it was prior to Title IX’s passage in 1972—representing an increase of more than 1,000%.

Title IX and its implementing regulations contain a set of limited, sex-affirmative exceptions. Those exceptions permit schools to take sex into account to address imbalances in admissions, academic programming, and sports.

A sex binary—male vs. female—is the foundation upon which the entire statute’s operation rests. Title IX’s use of the words “both” and “either” to address educational disparities within its regulations reinforces the understanding that there are only two sexes, and opportunities for both must be equal under the law.

Title IX requires educators to see women as they see men. And it ensures that girls and women, at long last, can finally experience sex equality in their educational pursuits.

But with an onslaught of national efforts to gut the very mission and purpose of Title IX’s protective effects, it has fallen to the states to remind organizations like the ACLU that the law means exactly what it says it means.

Recently criticized by the left-of-center New York Times for abrogating its free speech roots, the ACLU might do well to reevaluate the things it values and defends.

Judging by its spate of lawsuits against states passing sex-specific sports bills, it appears biological women aren’t one of them.