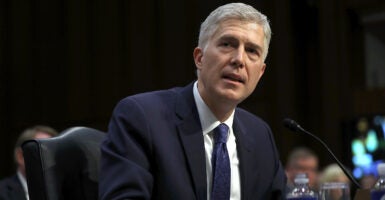 Nicole Imhof is a 2020 graduate of the University of Massachusetts Amherst and a member of the Young Leaders Program at The Heritage Foundation.

A Supreme Court case decided last year is a cautionary tale of the legal equivalent of the law of unintended consequences.

The high court issued a decision last June in Bostock v. Clayton County, a landmark 6-3 opinion holding that discrimination “on the basis of sex” for the purposes of Title VII (which forbids discrimination in employment) includes discrimination based on sexual orientation and gender identity.

Although the majority began with the supposition that “sex” within the statute meant biological sex, it reasoned that biological sex was inextricably connected to both sexual orientation and gender identity.

Writing for the majority, Justice Neil Gorsuch claimed that this was “straightforward application of legal terms with plain and settled meanings.” In his dissent, though, Justice Samuel Alito called the majority’s decision “legislation.”

The court held that “on the basis of sex” in the context of employment discrimination includes sexual preference and gender identity, even though it acknowledged that when Congress passed the law in 1964, it meant the term “sex” to include only biological sex.

The Bostock decision immediately raised the question of whether “on the basis of sex” means sexual orientation and gender identity for all other laws that use that term—and there are several.

For example, if Bostock applied to Title IX, which forbids discrimination in education, it would seem to also forbid single-sex sports teams and sex-specific bathrooms and locker rooms.

To be sure, Gorsuch tried to cabin the court’s decision to Title VII, saying, “[W]e have not had the benefit of adversarial testing about the meaning of [other statutes’] terms, and we do not prejudge any such question today.”

The problem with that, however, is that it’s not the way lower courts work.

What matters for them when they are deciding similar—but not identical—cases to ones decided by the Supreme Court is the reasoning. And there were plenty of reasons to expect the lower courts would take Bostock and run with it.

Now that some time has passed, we’ve been able to look at what the lower courts have done with Bostock, at least so far, and, sure enough, they’ve applied it to other statutes.

In at least a dozen cases, the courts have unsurprisingly extended Bostock’s definition of “sex” in Title VII to other statutes.

In Grimm v. Gloucester County School Board and Adams v. School Board of St. Johns County, for example, the 4th and 11th U.S. Circuit Courts of Appeal, respectively, applied Bostock’s definition to Title IX and struck down sex-specific bathroom policies in public schools.

In Hecox v. Little, a district court in Idaho applied it to Title IX and women’s sports, and struck down a state law that preserved women’s sports for biological females. That case is now on appeal.

Gorsuch’s attempt to limit Bostock to Title VII was ignored by those courts.

One of the courts extending Bostock to Title IX said, “[t]here is no apparent reason why the Court’s conclusion … would remained cabined to Title VII and not extend to other statutes prohibiting sex discrimination.”

Some cases have gone even further. In Clark County School District v. Bryan, the Supreme Court of Nevada not only applied Bostock to Title IX, it expanded “on the basis of sex” to include even “perceived sexual orientation.”

A federal district court in Pennsylvania, meanwhile, extended the definition of sex to include “gender stereotyping.”

Still other cases have applied Bostock to statutes and even regulations far afield from civil rights laws. In Whitman-Walker Clinic Inc. v. U.S. Department of Health and Human Services, for example, the federal district court in the District of Columbia applied Bostock’s definition of sex to the Affordable Care Act through a circuitous route.

A federal district court in Virginia even relied on Bostock to say that a gender-specific dress code could be challenged as unconstitutional sex discrimination in violation of the Equal Protection Clause. The Court of Appeals of North Carolina did the same thing in the context of sexual orientation.

President Joe Biden, ever eager to use executive action to advance progressive social causes, has joined in. Relying on Bostock, he issued an executive order directing executive branch agencies to reinterpret all the civil rights laws to interpret “sex” as Bostock does.

Sweeping as Biden’s order is, the courts are on their way to making it irrelevant. If the courts keep up their trend of expanding Bostock outside the context of Title VII, then by the time Biden’s federal agencies promulgate their regulations, the courts may have already finished the job for him.

As those lower court decisions illustrate, Bostock’s reasoning can be applied—or at least is being applied—to other contexts.

Of course, as a long-serving lawyer and judge, Gorsuch knew that. When he wrote that the court’s decision applied only to Title VII, he surely knew that that boundary was no sturdier than the paper it was printed on.