House Defense Bill Would Fail to Rebuild the Military 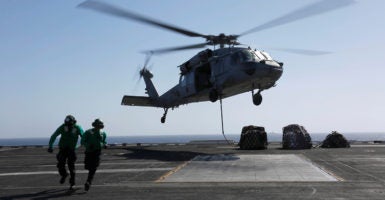 The House Armed Services Committee needs to do more if it’s serious about continuing to rebuild the military and meeting the challenges outlined in the president’s National Defense Strategy.

It all starts with the budget. Chairman Adam Smith, D-Wash., has proposed a version of the National Defense Authorization Act funding our nation’s defense at $733 billion—$17 billion short of the president’s budget request.

Last week, the Senate passed its version of the defense spending bill by an 86-8 margin. It would provide $746.4 billion for defense, a 4.2% increase over 2019 levels.

The House should strive to meet this level of funding and be on par with the president’s request.

The amount authorized by the House Armed Services Committee represents only a 2.4% increase over 2019, which is below the 3% to 5% above inflation growth that the bipartisan Commission on the National Defense Strategy deemed necessary.

One of the salient questions in rebuilding the military is what to do with our air power.

In order to get production beyond these initial two planes, the secretary of defense is required to submit a report to Congress detailing specific plans on how the Air Force will develop and field the new aircraft.

While it’s a better choice than buying eight aircraft, the purchase of any F-15EXs is a mistake.

As stated by John Venable, a senior research fellow at The Heritage Foundation, the aircraft will be inadequate against the advancing technology of surface-to-air missiles, and will be restricted to use only in the continental United States.

The $941 million set to buy the F-15EXs should instead go toward fielding more F-35s, an aircraft much more capable of surviving today’s high-threat environment.

On the Navy side, the House has agreed with the Senate to refuel the USS Harry S. Truman, a Nimitz-class aircraft carrier. The Navy has already bought two reactor cores for the ship at a price of $538 million, which would be wasted without the refueling.

The savings from retiring the ship midway through its life would be minuscule, and in fact contradict the Navy’s own force-structure analysis. It would further delay achieving a 355-ship force, and put more strain on the current fleet.

The Navy will also acquire 11 new battle force ships. This procurement puts the Navy on track to meet its goal of achieving a 355-ship Navy by 2034.

During the Cold War, the Navy maintained a force of 400 ships to deal with the strategic competitor of the Soviet Union. The Navy’s goal of 355 ships is a formidable force, but short of The Heritage Foundation’s recommendation of 400 that would be ideal for major regional conflicts.

When it comes to space dominance, Heritage has recommended the creation of an independent Space Force to protect our space assets and establish dominance. In the event of war with a major power, it will be essential for the United States to defend GPS, early warning systems, and other space assets that are crucial to the U.S. military.

The House’s bill did not initially contain the creation of a Space Force, but in the late hours of the committee’s markup on June 12, Chairman Jim Cooper, D-Tenn., and Ranking Member Mike Rogers, R-Ala., of the strategic forces subcommittee offered an amendment that established a new Space Corps.

Like the Senate’s Space Force, the House’s Space Corps would be an independent military service under the Department of the Air Force.

When it comes nuclear weapons, the House defense bill would prohibit funds for the deployment of the W76-2 warhead, a low-yield nuclear weapon for use on a submarine-launched ballistic missile. This is a misguided approach that would weaken our defense in the near term.

Barring the deployment of low-yield nuclear weapons would reduce the credibility of our nuclear deterrence, as Heritage research fellow Michaela Dodge has pointed out.

If Russia knows the United States has no credible response to its low-yield weapons, it will be more likely to strike first.

Low-yield weapons add more rungs to the escalation ladder. Absent a diversified arsenal that includes low-yield warheads, the United States’ only nuclear retaliatory option would be to use a high-yield, highly destructive weapon—an option that is not very credible for a government accountable to its people.

All in all, if the House is serious about rebuilding the military, it needs to give the men and women of the Armed Forces the resources they need to be successful.