The Defense Production Act: Why Voluntary Cooperation Is Nearly Always Better Than Forced 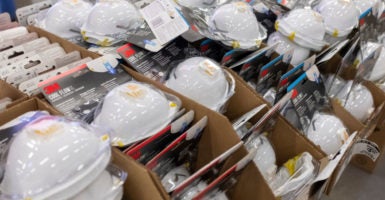 Describing what the nation needs and allowing industry to self-select what capabilities it can offer toward those requirements is a winning strategy. Pictured: 3M N95 particulate filtering face masks are seen at a store in East Palo Alto, California, on Jan. 26. (Photo: Yichuan Cao/NurPhoto/Getty Images)

Since President Donald Trump signed an executive order last week to invoke the authorities in the Defense Production Act for use in the coronavirus crisis, there has been a lot of talk about what he should and should not do with these enhanced powers.

The Defense Production Act allows the administration to prioritize private sector contracts, reallocate raw materials, direct production of desired goods, and even directly invest to increase production of selected goods. It essentially allows the government to interfere in the marketplace as needed to obtain materials essential to defense or dealing with a national emergency.

Trump was right to invoke these authorities as no tool should go unconsidered during this period.

But critics have begun to question why actions have not yet been directed under the act. They want to see immediate orders going out from the White House directing companies to change their production lines.

Some go so far as to propose conspiracy theories that big business leaders have gone to the president to beg him not to interfere with their lucrative business models and profits. Sen. Tammy Baldwin, D-Wis., has even introduced legislation to force the administration to start using the law’s provisions.

But private industry already is responding to the needs of the nation—voluntarily modifying its practices to meet America’s challenges. It doesn’t need to be forced.

At a March 22 press conference, White House adviser Peter Navarro described how executives from Honeywell had reached out to offer assistance in making N95 masks, how FedEx is making transportation happen, how Pernod Ricard offered to start making hand sanitizer, and how other trade associations were mobilizing their members to assist. General Electric voluntarily agreed to ramp up production of critical ventilators.

Navarro described it as “the greatest mobilization in the industrial base since World War II.”

In the military, you quickly learn you get better outcomes when you give a subordinate a goal and allow that person to figure out the best way to accomplish it. We can force people to perform tasks against their will, but that’s rarely the best option.

Nobody wants this crisis to end more than private industry. Describing what the nation needs and allowing industry to self-select what capabilities it can offer toward those requirements is a winning strategy.

Similarly, companies are in the best position to assess how to contribute to winning this war against COVID-19 and need the necessary financing and the red tape cut.

At the same press conference, Trump said the threat of the Defense Production Act was enough to provide great incentive for industry:

We have the threat of doing it, if we need it. We may have to use it somewhere along the supply chain, in a minor way. But we have millions of masks being done. We have respirators. We have ventilators. We have a lot of things happening right now.

The Defense Production Act is a powerful tool. It’s likely the administration will need to use it at some juncture, maybe soon, to breakthrough some logjam, or to provide money to a company so it can increase production capacity. Figuring out those needs is not an overnight endeavor.

In the meantime, the administration is right to identify the needs, coordinate with industry, provide it with the resources and permissions, then get out of the way so that it can produce what the nation needs.